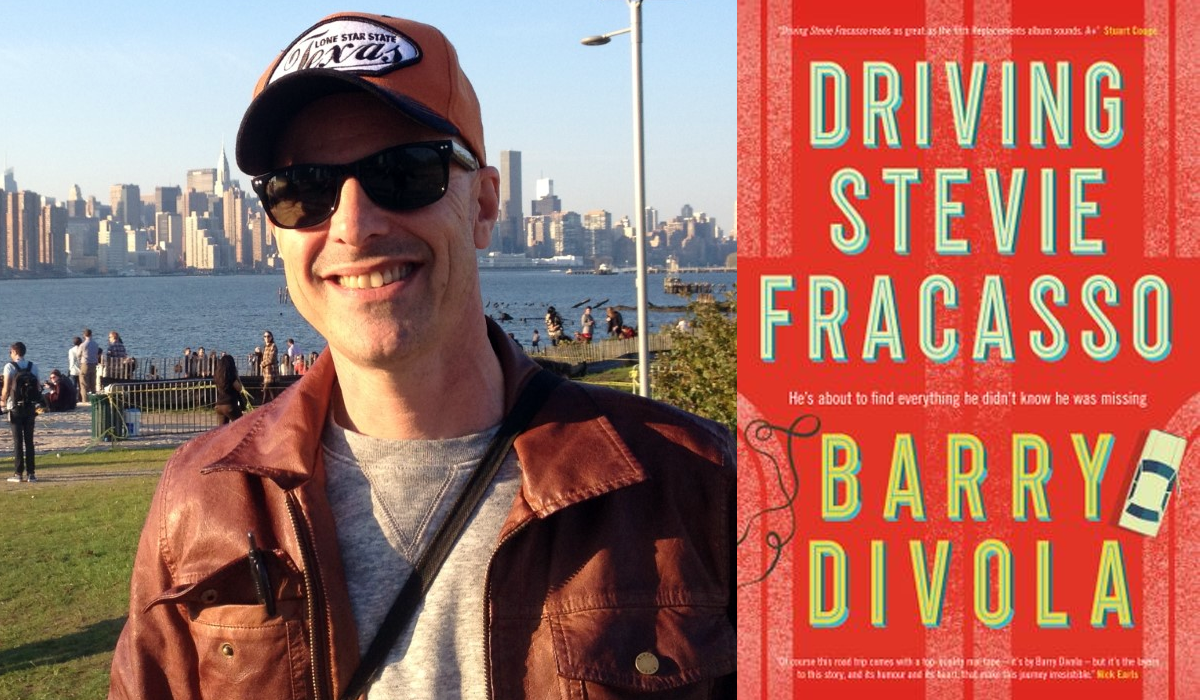 “It was great,” laughs Divola. While music is his main hustle – he was the senior writer for Rolling Stone Australia for many years – his journalism takes him a lot of places. Including the home of the author of Jasper Jones. He’d insisted on ‘embedding’ himself for the Good Weekend story – for three days. Silvey was grudging at first. He wasn’t used to giving journalists more than an hour. By the end, he was letting Divola rifle through his record collection and teaching him how to play golf.

Hence the roast at launch. Which, it has to be said, was followed up by Silvey saying some lovely things about Driving Stevie Fracasso. Divola writes pretty much every day for his job, and has put out eight books prior (one, an alphabet book, called M is for Metal), but this is his first novel. Surprising none, it’s a story that is straight from a music nerd’s heart.

There are chapters named after songs by eighties alt rock band The Replacements. Little music critic pet peeves he’s snuck in – like when an artist describes their music as ‘honest’. (“Why are you telling me how honest your music is?” Divola exclaims over the phone, a laugh sitting at the back of his throat, where it remains for our whole conversation. “Is it any good? I don’t care if it’s dishonest, man! ‘My Sharona’ is not that honest a song, but it’s great!”) He wrote the book with John Coltrane in the background and a soundtrack looping in his head, and he’s even released that soundtrack as a Spotify mixtape. At the launch, rather than go down the “cask wine and Jatz crackers” road, he played songs from that mixtape at a bar called Rodney’s Bait n Tackle with his band, Radio Radio.

So, stuffed with music-nerd influences, music-nerd easter eggs, and positively thrumming with music-nerd passions. But, on the other hand, Driving Stevie Fracasso is not just a book for the music obsessed. It has a far bigger heart.

Set on the roads of the United States and the streets of New York in the lead-up to 9/11, it tells the story of two estranged brothers – one a music journalist called Rick, the other a long-lost cult musician called Stevie – and their journey to discover what they’ve lost through the years. It’s a redemption story with a rhythm, a road trip adventure comedy reminiscent of Nick Hornby, and a love letter to a city that Divola can’t wait to walk again.

Now living in Perth, Australia’s always been his home. But Divola has been to New York almost every year since 1991. He does work while he’s there – travel writing, band interviews – but he also spends a lot of the time just soaking the whole place up. Last year, of course, going was out of the question. He was there, though, for that other cataclysmic event that left the city irrevocably changed. Twenty years ago, his flight happened to fall just weeks after two planes were hijacked to hit the Twin Towers.

“That trip had this really profound effect on me,” Divola says. “I’d spend a lot of time in Union Square on 14th street, where it became a focal point for people to come together to protest. There were Buddhists chanting with incense burning, there were kids writing these heartbreaking messages on these huge sheets of butcher’s paper, there were candles burning, there were arguments, there were people singing songs of peace. It was like this microcosm of New York trying to deal with what had happened, and what was going to happen as a result. So I hung out there, and New York seemed to open up, everyone seemed to want to talk. I came home and I thought ‘One day I’m going to put that in something.’”

It took two decades, but he did.

As a second coincidental crossover into literary journalism, this book might not be out at all if it weren’t for Trent Dalton. Dalton was another author Divola had interviewed as a journalist, this time for the West Australian back in 2019.

“It was for Boy Swallows Universe,” says Divola. “In the course of doing that story, I got so encouraged to finish my novel which had been sitting around for years because [Dalton’s] just so enthusiastic. He’s got two young daughters, I’ve got two young daughters; he’s a journalist for his day job, I’m a journalist for my day job. He wrote the book between the hours of 8 o’clock and 10 o’clock every night, after feeding his kids and spending a bit of time with his wife. And I thought, man, that is so encouraging that someone can do that, just through persistence.”

For the story, he also spoke to Catherine Milne, Dalton’s publisher at HarperCollins. When they’d wrapped that up, Milne asked, “So Barry, have you got a novel in you?”

She looked at it. She liked it. She bought it. So it goes.

Yes, the central character Rick is a music journalist. And yes, so is Divola. But no, they’re not the same person. Rick’s life is far more messed up than Barry’s, for one. Within the space of 24 hours, early in the book, Rick loses his girlfriend, his regular paying job and his apartment. He’s also far more grumpy than Divola, who is an irrepressibly down-to-earth, cheerful kind of guy.

Temperament wise, he seems more like Stevie – who is also incredibly messed up, but in different ways, and with a different kind of attitude to his brother. Stevie is the one who makes what would be a boring car trip into a high jinks and detour-dotted journey, riddled with confrontations, weird characters and a dog called Axl.

While readers may recognise in Stevie their own beloved real-world, self-destructive rock stars gone to seed, “Stevie Fracasso is Stevie Fracasso,” says Divola. A bit of a composite of people he’s read about, people he’s interviewed, sure. But he’s not any person in particular.

Although, says Divola, in his head, Stevie does look like John Cusack. An older and heftier version of John Cusack. And Rick looks like Paul Rudd. Even while writing, Divola was casting the Netflix series adaptation in his head. Linda Cardellini he’s cast for Jane, Rick’s infinitely wise ex, “because I’ve got a crush on her”. Jim Jarmusch will play Elliot Toastman, who is a kind of rock apostle Obi-wan to Rick’s foolhardy Luke.

The book’s preoccupation with New York made sense after Divola explained the personal connection, and the music of course, but why’d he choose to make it about brothers? Because the book always had to be about brothers, he tells me – he knew that from the beginning. Divola has a brother, but that relationship doesn’t have much to do with the one in the book. Also, he’s a boat builder.

“There was one thing that really inspired me there,” he says after a beat or two. “I was a writer for Rolling Stone magazine for a long time, and within a space of a year I did two interviews. One was a guy called Roky Erickson, who was in a band called The 13th Floor Elevators. One was a guy called Jeremy Oxley who was in a band called Sunnyboys in Sydney. They had no relation to each other, and were separate stories, but both of these guys had severe mental health issues.

“The end result was Roky, he had a revival in not just his career, but his life. Jeremy was the same – the Sunnyboys reformed, and are still playing to this day.

“Although the story of Rick and Stevie in the book isn’t the story of these brothers at all, they really provided the spark for me and gave the story a bit of a kick.”

Divola has already got another novel in the works. This time, it might not even have anything to do with music. He’s not making any promises though. It’s early days. Debut novels, as Craig Silvey no doubt can tell him, can be a pretty huge deal – in both good and bad ways. Driving Stevie Fracasso has been living inside of him for decades, too.

My wife probably put it the best,” says Divola. ‘“Yes, this book isn’t about you. But the story is so you.’ And she’s right. She’s pretty perceptive.”

Driving Stevie Fracasso by Barry Divola was published in March 2021 by HarperCollins. For the chance to win a free copy, email marketing@roaringstories.com.au with the subject line: PLEASE FIND ME. (It’ll make sense when you read it.)

The former Labor politician and author talks on his new book ‘What Is To Be Done: Political Engagement and Saving the Planet’.