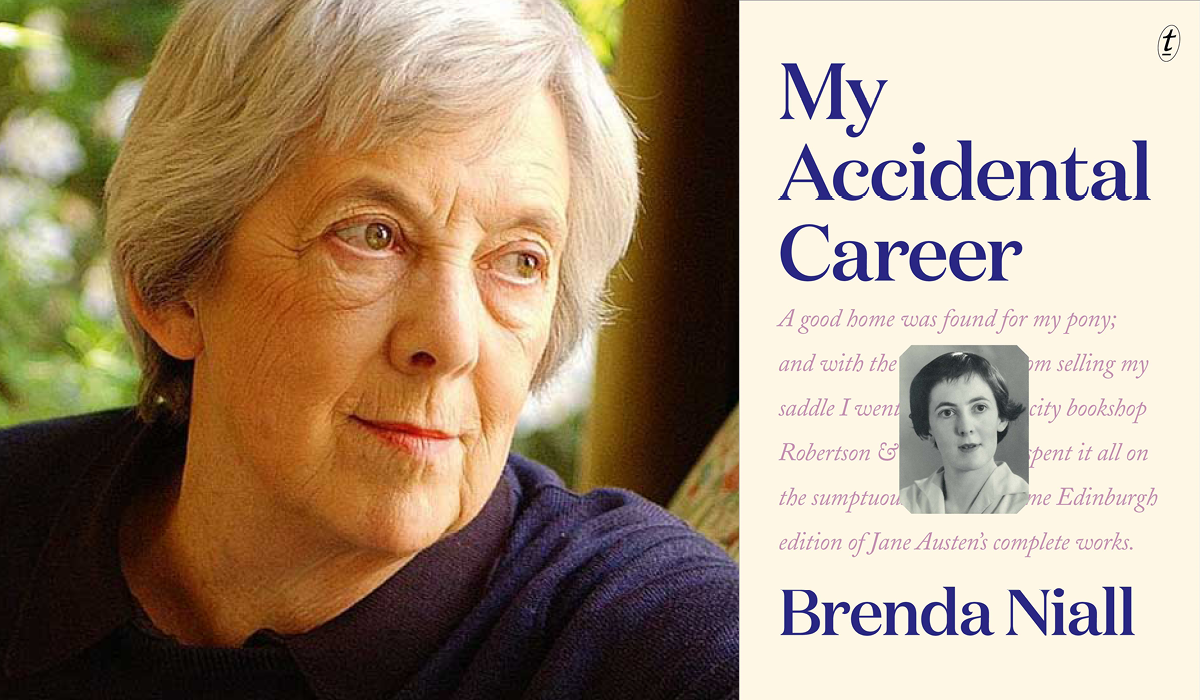 Brenda Niall is one of Australia’s most acclaimed biographers. With elegance, deeply researched detail and wit, she has chronicled the lives of Australian artists, archbishops, family dynasties and more, with her award-winning book The Boyds and her portrait of the Durack sisters True North the most well known within her ouvre. In 2004, she received an Order of Australia for ‘services to Australian literature, as an academic, biographer and literary critic’. Now in her nineties, she looks back on her extraordinary life in her new memoir, My Accidental Career. As Bernadette Brennan writes: ‘Lovers of Australian history, literature and culture will be gripped.’ Read our Q&A with Niall below.

Biographies, as you write, require patience; they can’t be rushed. Is the same true of your memoir? When did you first begin writing My Accidental Career, and what prompted you?

It’s a pandemic book. What else do you do in isolation? I did some dutiful tidying of old papers and found my 1958 diary of a holiday in Ireland. Written on long summer evenings, all that time ago, it seemed fresh and funny. I thought: this is too good to waste. Then I looked for later diaries, and found four more; two in the United States and two later ones in the UK. I thought then that I could make the diaries interludes in my Australian life and so perhaps build a narrative that would take in the ‘then and now’ with their different perspectives.

What are the joys of writing a biography, compared to an autobiography?

Discovery of the unknown, perhaps, though even with an autobiography there are surprises: some you mightn’t want to admit to. With a biography, you have the choice of subject. And you learn a lot while trying to understand experiences that might be quite foreign. When material is scarce, there’s the fascination of detective work. With an autobiography you may struggle to choose what to include; there’s unlimited choice. And you have to be ruthless in choosing details that have meaning and aren’t just cluttering the pages. I like the rule of the classic French theatre: don’t put a chair on the stage unless someone is going to sit on it.

I am not sure there were extra skills. Perhaps the need to explain a little more, or at least to be aware that what is obvious to me may be foreign territory to some readers. And of course to try to be honest about myself.

As the book’s title suggests, your career has been marked by serendipity – a very fortunate thing, as we learn, given you were a woman emerging and moving through a social era which typically did not champion intelligent, ambitious women. What ‘happy accident’ are you most grateful for, looking back?

There are so many. Perhaps the turning point of leaving home and Melbourne for independence in Canberra. I stopped in the city one day to chat with an old friend from university days. I told him that I was thinking about doing postgraduate work but wasn’t keen about going back to Melbourne University. He said ‘Come to ANU’ where he was taking up a lectureship. One day later, it was all arranged. That sounds as if I was totally passive; in fact I recognised in that moment that I needed independence and ANU was the answer. But without that accidental meeting…who knows?

Several chapters in the book are diary extracts, recording for instance your time as an academic in New Haven, or your time researching for The Boyds book in England. Have you always kept a diary? How many have you filled over the years, and where do you keep them? How essential were these in clarifying memories and rediscovering forgotten experiences in the writing of your book?

I didn’t keep a diary until I was in my mid-twenties and I’ve lost many of them. But I have the survivors in a trunkful of old papers. In the pandemic isolation I started to read the early ones – the 1950s – those that I’d written in Ireland and the US, and later ones on the biographer’s trail in England and Italy, were quite detailed and I thought ‘these are really good’ so I kept looking, found a few more and then came the idea of building on and around the diaries to make My Accidental Career.

In addition to these diaries, what primary and secondary sources did you have recourse to?

I had some letters that helped remind me of things I’d forgotten or got wrong in memory.  Secondary sources: not many, but I read some memoirs of my period. Geoffrey Blainey and Jim Gobbo, both my contemporaries at Melbourne University, and Kathleen Fitzpatrick, older than me, were all useful.

I found it extremely poignant that one thing that motivated you to write Seven Little Billabongs was to help fill the absence of your letter-writing exchanges with Grahame, the man very special to you, who had lately passed away. Do you still write letters?

Never again like that. Those letters were conversations, personal, day to day. I don’t write many now, partly because I use email a lot.

With different tools, data, archives and publishing ecosystems, do you think the work of a biographer is easier or harder than it was fifty years ago?

In some ways easier. So much laborious copying, in pencil, often in overseas archives, has been overtaken by technology. All the same, there was a special excitement and closeness in seeing the original letter, and turning pages (with gloves on). And you only get what you ask for. If you’re on the spot, a friendly archivist may tell you about things you didn’t know existed.

Writing has a unique power to help us get to truths that were always inside us, but unformed and out of reach from our conscious mind. Has My Accidental Career changed, in any way, how you think about your life or yourself?

Perhaps a little. One example. I had thought of myself as a shy and anxious child, but when I looked back I could see that I often said no quite firmly. My phrase for my five-year-old self became ‘timid but implacable’. I had never thought of that contradiction, but it rings true now.

Find your copy of My Accidental Career at Roaring Stories Bookshop Balmain.