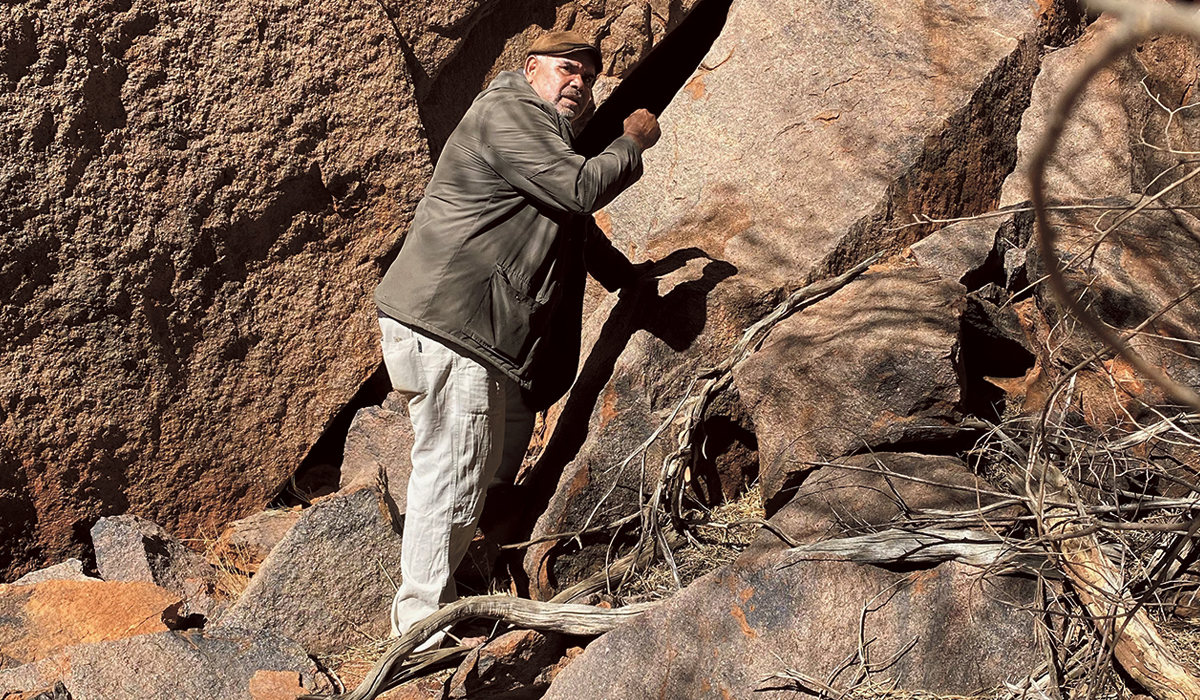 Soaring up from the flat, far-reaching plains of the centre, a huge ferrous-red form under a broad sky. You can’t see it and not feel some sense of the sublime. Of ancient arkose rock, formed 500 million years ago beneath a vanished ocean, its presence on the land has been a living place and a sacred site for the Anangu people, its traditional custodians, for tens of thousands of years. Long before European explorer William Gosse began a cairn on its summit. Long before its westernised naming after a South Australian Premier. Long before it became a thing of conquest for world tourists, or a kitsch symbol to repurpose for shirts, knick-knacks and spiritual glamping retreats.

And long before Uluru would become entangled with the life of William (Bill) McKinnon. A white policeman with a Northern Territory beat, he patrolled his slice of the ‘wild west’ when the interior was overwhelmingly seen by Europeans as a landscape of savageness and savages that it was their duty to tame. In 1934, a fatal encounter on the rock with an Anangu man called Yokununna would not only ripple across history. It can be seen, as historian Mark McKenna compellingly puts forward, as a moment that stands in as a metaphor for the foundation of Australia; of the violent imposition which begins this nation, and the political will to efface the reality of this origin of oppression and blood. In his book, Return to Uluru, McKenna unearths new evidence and gathers testimony to disclose a story of frontier injustice and its legacy today.

It is a tale of a hunt, of murder and of the grotesque desecration of the dead sanctioned by the state; of the clash of tribal law with British law; of the racialised sentimentality of settler romance; and of the vast chasm that separates the white version of history with the Indigenous one.

It is also, however, a story of the possibility of truth-telling and – however small – the chance of healing that can follow. While the book was coming together, Indigenous leaders gathered at Uluru to demand Voice, Treaty and Truth. Their calls for constitutional reform and a mechanism for truth-telling through the Makarrata Commission have been rejected by successive governments – but the Uluru Statement From the Heart lives on. This book isn’t about the Uluru Statement, but it speaks to it.

Released in February this year, Return to Uluru has recently sold world rights through publisher Black Inc, and earned high praise from Indigenous and non-Indigenous readers, including that from Iman woman and Indigenous leader Marcia Langton. In the work, “Mark McKenna sets the highest standard for truth-telling of the kind that Australians so urgently need if they are to live in this country with honour,” says Langton.

It isn’t the book McKenna intended to write. A white academic and historian of distinguished merit, he began with a vague idea about publishing a kind of meditation on the centre – how it speaks to us, what it means. But then he started looking deeper into McKinnon.

“The more I found out about him, the more I found him caught up in the myths of the centre,” McKenna tells me. Gradually, he felt himself being pulled by the current of this other story, and his original plan grew paler. One morning, he woke up and it hit him: “Of course! That’s what I’ve got to do. I’ve got to do it this way.”

It wasn’t that he hadn’t known about the incident of 1934. He’d been aware for a long time of the killing of Yokununna in the cave at Uluru, the relentless, days-long manhunt that preceded it. The National Enquiry that followed into the death and its absolution of McKinnon, who fired the shot.

But McKenna’s revelation, and the book itself as it’s written, would not have been possible if he hadn’t discovered the journals in a Brisbane garage. McKinnon was an obsessive note-taker; diarising even the most mundane details of his everyday life, both during his career as a policeman and into his retirement. (He even went so far as to record the dimensions of the camping tent he was sharing with his wife on his honeymoon.)

In these diaries, a single sentence from McKinnon’s hand contradicted the narrative that he had maintained all his life about the shooting. It was also these diaries that gave clue to where the remains of Yokununna had been all these years – opening up the chance of repatriation.

“We’re lucky if we come across a story like this once in our lives,” says McKenna. “I don’t expect to again.”

McKinnon died in 1997, and the grave denies him his right of response. But the descendants of the two families still survive, and McKenna talked with both for the book, alongside others who had bearing on the events and their aftermath. This active engagement on the ground of the living is critical to McKenna’s approach. He is not the kind of historian who is “‘ghettoed’ in the archives,” he says. “All of my work draws on interviews and conversations with people connected to the histories that I write.”

Against the many passages quoting from McKinnon’s fastidious, quotidian hand, the second half of the book foregrounds other characters, essential to the events and the telling. Among these is Joseph Donald – who was among the group pursued as criminals by McKinnon and his two trackers after a retribution killing on another tribe. His account of what happened that day is written in the book as a full transcript from an 1986 interview with documentarian David Batty. “To paraphrase his telling would be to enact yet another silencing,” writes McKenna. The original recording, broadcast first in 2016 with permission from the family, is below.

Other Indigenous voices included in the book are those of Reggie and Cassidy Uluru, sons of Paddy Uluru. A custodian of the rock and the brother of Yokununna, Paddy had gone into exile from his land following the events of 1934.

For all the horrors that it enfolds, Return to Uluru is remarkably beautiful in its design. A hardback enclosing fine-quality paper, images interleaf the text around which the story wends, enriching and interacting with its flow. There is Uluru in its many respondent forms and McKinnon’s elaborately staged self-portraits; maps showing Indigenous language groups and police patrol areas. There is a photo of Mututjulu Waterhole at the rock, where two ancestral beings – Kuniya, the woma python, and Liru, the poisonous snake – fought their epic battle. And there is a photo taken on request by McKenna of Sammy Wilson, Paddy’s grandson, pointing at the opening in the rock where his relative was shot almost a century ago.

“[Executive Chair] Morry Schwartz and [Senior Publisher] Chris Feik at Black Inc understood without me telling them the visual dimension of what I do,” explains McKenna when I comment on the book’s production quality. ”I was bowled over… And it makes an incredible difference. It helps to give the text room to breathe, and it helps the reader to have time to reflect. There’s a connection. The layout and the design and the paper and the images, they all play a role in the story in making it what it is.”

In writing Return to Uluru, McKenna sent tremors through a moment in history that would expose just how alive, volatile and contested this thing we call history is. In his uncovering, McKenna found the present/past not only in documents and other archival material, but embodied in the living, and infused into place. And found it, too, in places where it so easily could have been lost forever.

“I’m still astonished by the fact you can find the legacies of the Australian frontier in a suburban garage in Brisbane,” he reflects. “It’s a reminder of how close this history is to us.”

Return to Uluru by Mark McKenna was published by Black Inc in February 2021. For the chance to win a copy of the book, email marketing@roaringstories.com.au with the subject line: ULURU.