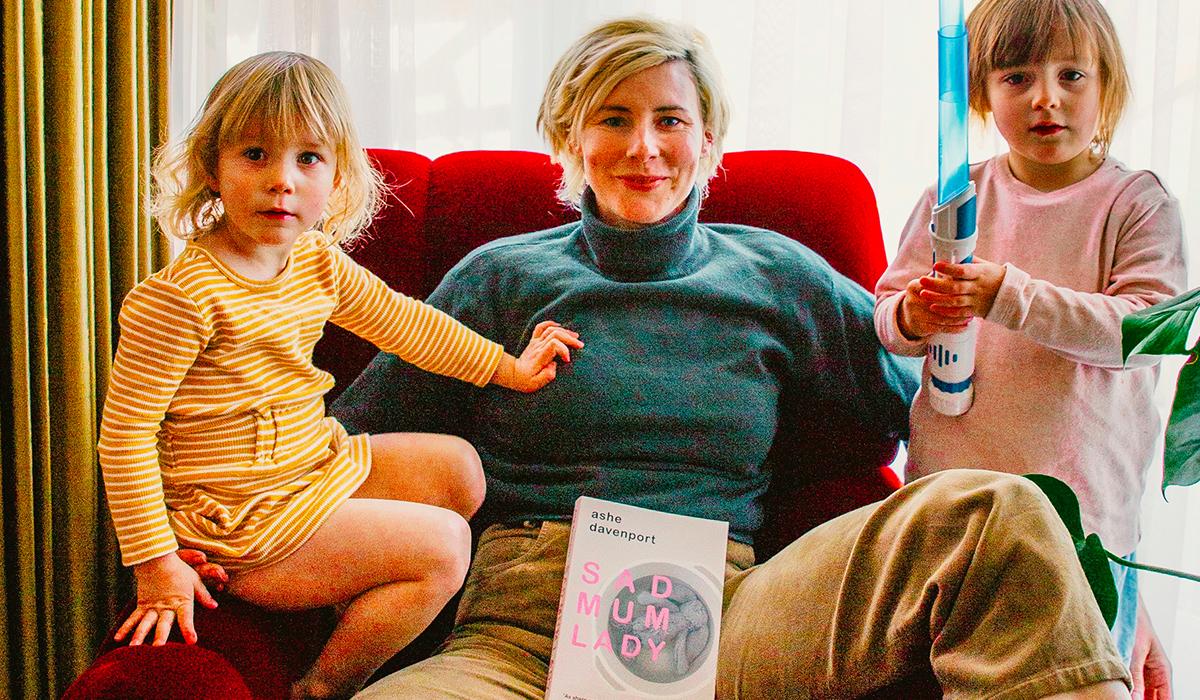 Ashe Davenport on being a sad mum lady

When I think about becoming a mother, possessed of fertile ovaries as I am, my head tilts back and produces a thruple chin of horror and the deepest dread. I can hardly conceive of a more derailing experience. There’s something growing. Inside you. And then it slimily bursts out from your vagina to a new-motherload of inconceivable pain – taking your known comforts, sleep, sex life, savings, former body and likely career trajectory away with it.

I’m sure there are benefits. A more enriching life (perhaps). A whole new understanding of what sacrifice means. Tender moments, a renewed sense of play, someone to pop your dentures back in when you get old. Perhaps a future cost/benefit analysis will reduce the reactionary folds of that chin into a more mature, maternal point. Right now, the idea of motherhood as a time in which a woman is at her supreme and natural zenith has no truck with me.

It was then highly amusing – and somewhat reassuring too – to read Ashe Davenport’s personal expose of pregnancy and new motherhood in her new book Sad Mum Lady. Her candour is excoriating, cleansing and rare. Just because you’re a mum, after all, doesn’t mean you automatically morph into a radiant, doe-eyed mumsy figure, pure of heart and gentle in spirit. With a dark sense of the absurd and a Sedaris-like capacity to bear all, she tells of the many petty and profound and either way real tribulations that nobody and nothing had quite prepared her for.

A delightfully vinegar-soaked book of busted myths, dry sass, self-ridicule and – yes, of course – love, this is not a guidance book on parenting. It’s for sad mum ladies who sometimes feel shitty about being sad mum ladies – and to help them feel okay about feeling so shitty.

We talked with Ashe Davenport herself on the book: its origins, themes and aftermath.

Your book comically scrubs out the wholesome, peachy glow around the notion of motherhood and replaces it with a smear of bleary eyes, loneliness, existential crises and a torrent of diarrhea (among other unpleasant effluvia). Why is it so difficult for people to talk about how deeply tough and often traumatising motherhood can be?

It’s like starting your dream job, only it’s also the dream your parents had for you and your in-laws and your grandparents and any rando on the street who became misty-eyed at the sight of your pregnant belly. Parenthood is fairly widely understood as The Meaning of Life. The pressure to feel fulfilled by it is immense. You’re saving face a lot of the time.

How did the book originate?

I was horrified by pregnancy – the way it claimed my schedule and lung capacity and vital nutrients. But more horrifying than that was the expectation that I be constantly radiating with joy over it. I wanted a child, but I was in no way prepared for the level of sacrifice that entailed. I wanted and needed to scream that horror from the rooftops, or in my case a blog called Sad Pregnant Lady, which would become Sad Mum Lady.

What, in your opinion, are the most heinous lies surrounding being a mother.

There’s a culture of judgement and shaming when it comes to parenting – but the most toxic and relentless parts seem reserved especially for mothers. Do you have any hope this will change?

I do. Ali Wong is doing God’s work in that department. Her Netflix specials on pregnancy and motherhood works of genius. I’m glad to join the chorus of motherhood truthers.

Has the process of writing the book shifted how you think about yourself as a mum? Has it even helped you recoup your identity a little?

My own excruciating birth as a parent happened while writing it. I think the parent version of me is closer to the ‘real me,’ in a weird way. My pre-child self was very severe and defensive. Exhaustion coupled with the soul-destroying loveliness of my children stripped me of a lot of that armour. I feel a little more comfortable in my own skin. Flawed af. Trying to be better and do better. Still quite severe.

What was your husband’s reaction upon reading the book?

He left post-it notes throughout the manuscript, grammatical edits mostly, but also a couple of romantic ones. He was okay about his graphic diarrhoea scene. He told a poo story on Hamish and Andy’s True Story a couple of years ago. So he’s pretty much resigned to faeces being a part of his public persona.

How are your kids doing now? Any recent triumphs or travails?

They’re screaming as I write this. The kind that’s 50% fun. They’re in bed, but recently they’ve moved into bunkbeds. It’s an unfathomable amount of freedom. The toddler equivalent of a driver’s licence and six pack of UDLs. They’re friends now, finally. So both, really, a triumph and a travail, like most things.

How are you doing now?

Great! Not even a little bit suicidal. Occasional waves of anxiety over the book release, but good overall. Life and parenting stuff are more pleasant these days.

If your kids decide to have children of their own when they grow up, what advice do you imagine you’ll give them?

Sad Mum Lady by Ashe Davenport was published in 2020 by Allen & Unwin. Find it in store at Roaring Stories Bookshop, and read more about the book here.

A chat with the former ADF chief and Governor-General on his new memoir, You Shouldn’t Have Joined.