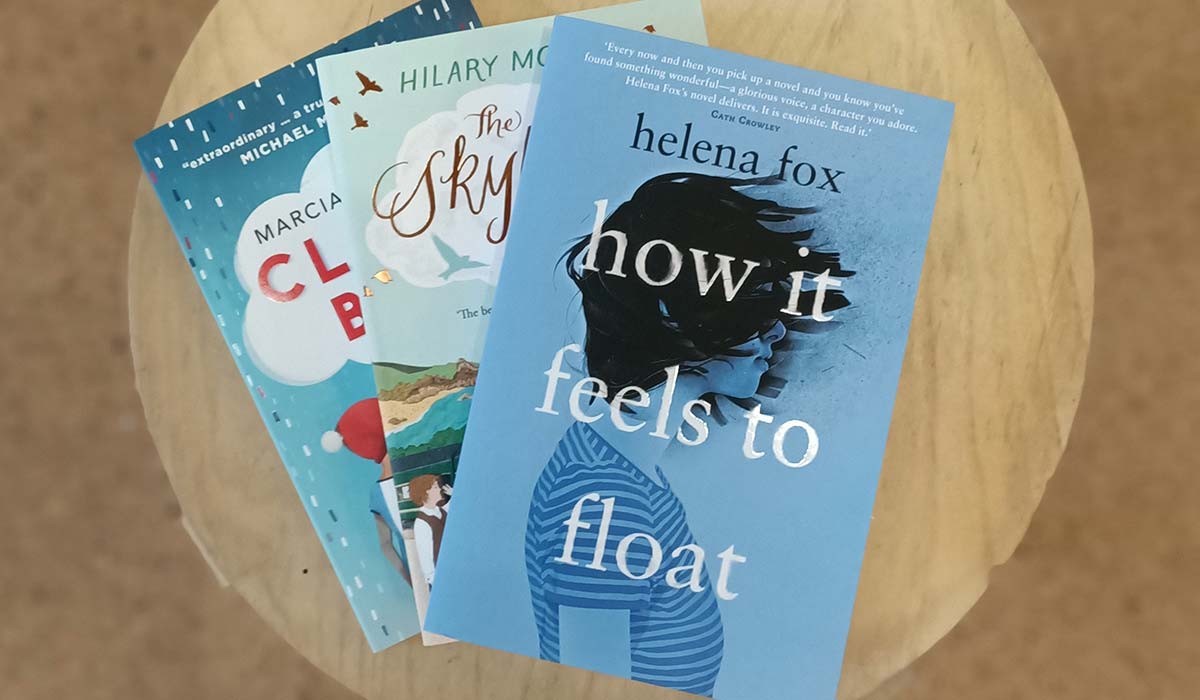 Teenage years are almost always a trying epoch, no matter who you are or how popular you are in school. Alongside various other companions – furry, feathered or human – books are some of the best friends a young person can have to see them along, make them laugh and help them realise they’re far from alone.

If you’re looking for one to gift to yourself or another, Roaring Stories YA book expert Bronwyn Richens here shares her top three books published in 2019. The first listed won a Victorian Premier’s Award, and all come highly recommended for taking on tough themes in ways that are original and compelling.

1 – How It Feels to Float by Helena Fox

Dark, runaway thoughts and floating are all clues that this seemingly regular teen story about not fitting in, feeling awkward about one’s body, one’s sexuality, social gaffs, drinking, kissing the wrong people and kissing the right people at the wrong time is going to move into heavier territory at some point.

Fairly soon we realise that Biz, our extraordinary protagonist, is clearly experiencing life a little differently to everyone around her. She floats, or dissociates out of her body when things get too stressful, too awkward or too weird to cope with. She has visits from her dead dad, a man who was obviously struggling with his own major mental health issues in the lead up to his death.

Mental health, illness, sexual confusion, grief and loss are all big topics in young people’s fiction right now, and a part of me nearly groaned out loud when I realised where this book was heading. But within a few chapters, I was hooked by Fox’s poetic language and Biz’s moving, authentic story.

Biz’s descent and torment are sympathetically drawn as is her search for a safe emotional harbour. Eventually this becomes a story about how to be anchored, or grounded and how to be present, instead of floating away, perhaps permanently.

How it Feels to Float was an intense read that drew me in gradually, compulsively, urgently, until I was left feeling like I had just read one of the best YA’s I’ve read in a very long time.

Yes, there are lots of books about childhood friendship morphing into childhood illness, resulting in death and grief out there for kids these days. But every now and again you come across one that is so well done, you simply have to share it.

Williams has written a touching story that is mostly told through journal entries.

Of particular interest was the grandmother’s story about her time in Changi prison as a child in WWII, that is told alongside the main story of Harry Christmas (cloud boy) and his best friend and neighbour, Angie Moon. Her story is told via the letters she wrote in secret, whilst in captivity, to her lost kitten. They reveal how a Girl Guides group was created to give the young girls a purpose during their time in Changi. They secretly sewed a quilt for their Guide leader to show her their love and appreciation. This part is based on real life events.

Grandma’s story reminds us that awful things have happened to children all through the ages, and that despite the hardship, suffering, fear, loss and grief, we can survive. In fact, we can do better than that – we can go on to live full and happy lives.

So as Angie and Harry deal with their own childhood crisis, we, the reader, can feel hope for the future and trust that any sadness can be dealt with and lived through.

As a bonus, you will also learn all about the various cloud types as you read the story and pore over the front and end papers.

3 – The Skylark’s War by Hilary McKay

Clarry, Peter and their older cousin Rupert are characters to take into your heart forever. Told through the innocent childhood eyes of Clarry, McKay is able to tackle some heavy issues.

Family dysfunction, bullying, sexism and feminist issues, homosexuality and the hardships of war are all in this book. McKay hints at stuff, leads us up to a point, but she never tells us or explains. She leaves us to work it out and make the connections ourselves, as all the best stories do.

The Skylarks’ War will make you laugh and cry. I found myself hugging it to my chest several times and wondering how many people I could make read this book ASAP.

Part of the success of this story is Clarry’s voice. She is believable and feels real.

McKay’s writing is the other big plus. She does not condescend or talk down to her child audience. She writes intelligently and like all the very best children’s writing (think Little Women, Anne of Green Gables, The Hobbit, The Silver Sword, Lenny’s Book of Everything) it is a book that can be read by children and adults alike with an equal amount of pleasure and enjoyment.

The Costa Award judges described The Skylarks’ War “as perfect a novel as you could ever want to read.” I think they may have understated just how extraordinary and wonderful this story really is.