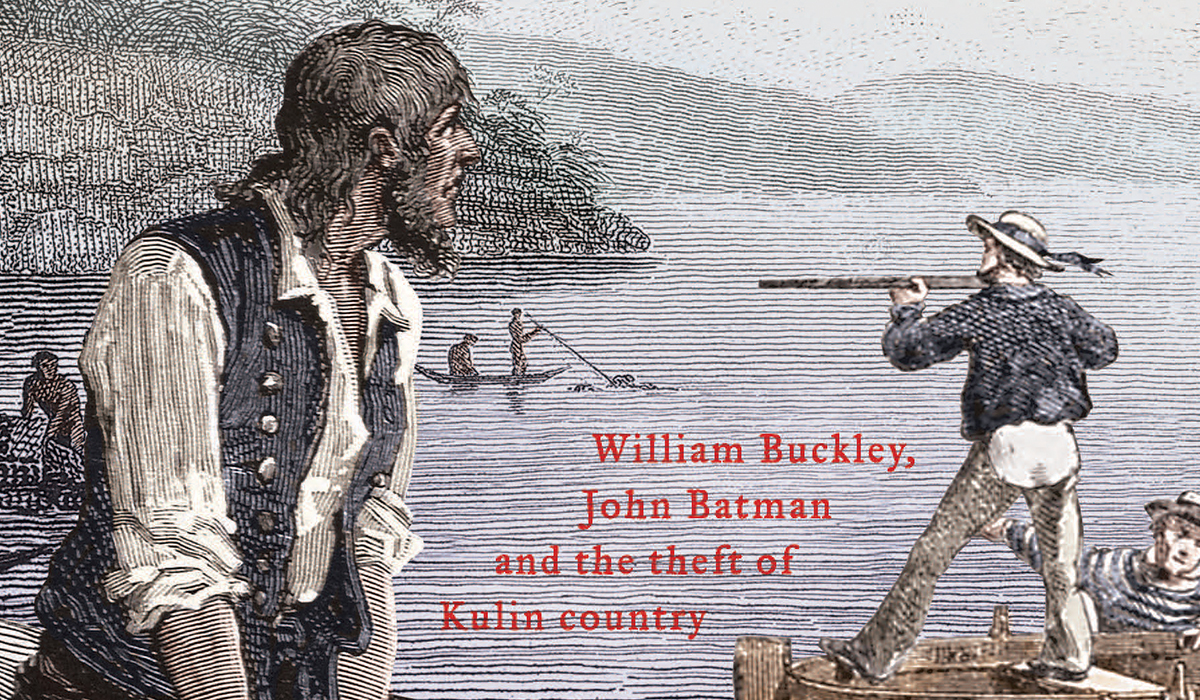 Buckley’s hope and a ghost hunt through time

I first heard about the William Buckley saga from a good friend who was mesmerised by a painting he saw of a giant white man dressed in possum skins. He told me the man had lived with Geelong’s Indigenous people for over 30 years. Interest duly piqued, he told me the expression “You’ve got Buckleys” derived from this man. Some contest this, but it didn’t matter. “Buckley’s chance” or “Buckley’s hope” is part of the Australian idiom – so the story had that going for it, a kind of linguistic recognition.

What probably clinched the deal in my mind were the scores of portraits and symbolic characterisations of the man. There was a portrait of Melbourne’s founding father John Batman, bringing Buckley in from the cold. Another had Buckley represented as a John the Baptist figure, his Aboriginal followers all ready for white man’s salvation. Another by Aboriginal artist Tommy McRae was a beautifully naïve painting of Buckley as the only white man in a corroboree line, his ship fading in the distance. There have been William Buckley representations for over two centuries. If the art had inspired so many, I knew the book had to do the same.

With the publisher’s initial approval back in late 2018, I then set about reading everything I could about the man. I went to Geelong, and was given local written materials, also to the State Library of Victoria which had all the original notes and annotations made by others about Buckley. Buckley had no writings. He was illiterate.

I went to visit the Wadawurrung Aboriginal Corporation in Geelong to obtain an Indigenous view of the man and of course, travelled throughout the Port Phillip area to see all the places he had frequented.

My base material was the 1852 John Morgan book, The Life and Adventures of William Buckley – the only one with a full account of his life with the Wadawurrung. I went to the Karaaf (Thompson’s Creek) and tried to envisage his life there. I also visited the little town of St Leonards on the Bellarine Peninsula, on whose shores Buckley re-connected with Europeans in 1835.

It became abundantly clear that any story about Buckley (the ghost) had to be written with an adjacent story about Melbourne’s so-called founding father John Batman (the bounty hunter). The two men’s lives were clearly interlinked.

At heart this book is about cultural shock. To do this story justice you had to immerse yourself in Buckley’s world. You had to know the Aboriginal names for important parts of their country. You had to explain Aboriginal culture, language, religion, way of life, adaptation to geography, their myths and dreaming, their farming practices, hunting and foraging methods, marriage practices, rules of warfare and initiation rites.

Then there were the funeral rites, eating habits, foods, medicines, clothing, tribal politics and forms of governance as well as kinship protocols and the rules which underpinned inter-tribal relations. And that’s before we even look at the Indigenous view of white people, their view of non-country tribes and the whole story of settler/Aboriginal relations. Did I mention somewhere there we have to mention colonial history of Victoria and Tasmania, all the while telling Buckley’s personal story?

In researching this I broke the book into three research “sections”. I took on researching the main story of Buckley’s time with the Wadawurrung, while I had another researcher in Tasmania look at John Batman’s life, and another look at other Europeans in the nineteenth century who had been taken in by Indigenous people across Australia. My main researcher, Michelle Blake, simply checked anything and everything I asked. It could be date or an incident, the name of a ship, the age of consent or the history of radicalism in England. She took it all on.

This was a difficult book because I was an ingénue in Aboriginal affairs, and I was crossing into areas I felt were beyond my ken. In this last respect I was extremely lucky. I formed a strong relationship with Dr Fred Cahir, an academic who specialised in Wadawurrung history, who worked out of Federation University in Ballarat (on Wadawurrung land). His boss, Professor Ian Clark, is one of Australia’s most distinguished academics on Indigenous history. The Ghost and the Bounty Hunter relies heavily on Fred’s knowledge and expertise.

I learned early that it is always worth seeking out the experts. No doubt about it, throughout this experience I was standing on the shoulders of giants.

The Ghost and The Bounty Hunter was published in 2020 by Harper Collins. It is available at Roaring Stories Bookshop.

Read an extract and review of Andrew Pippos’ debut novel, hailed as an ‘unforgettable epic’.