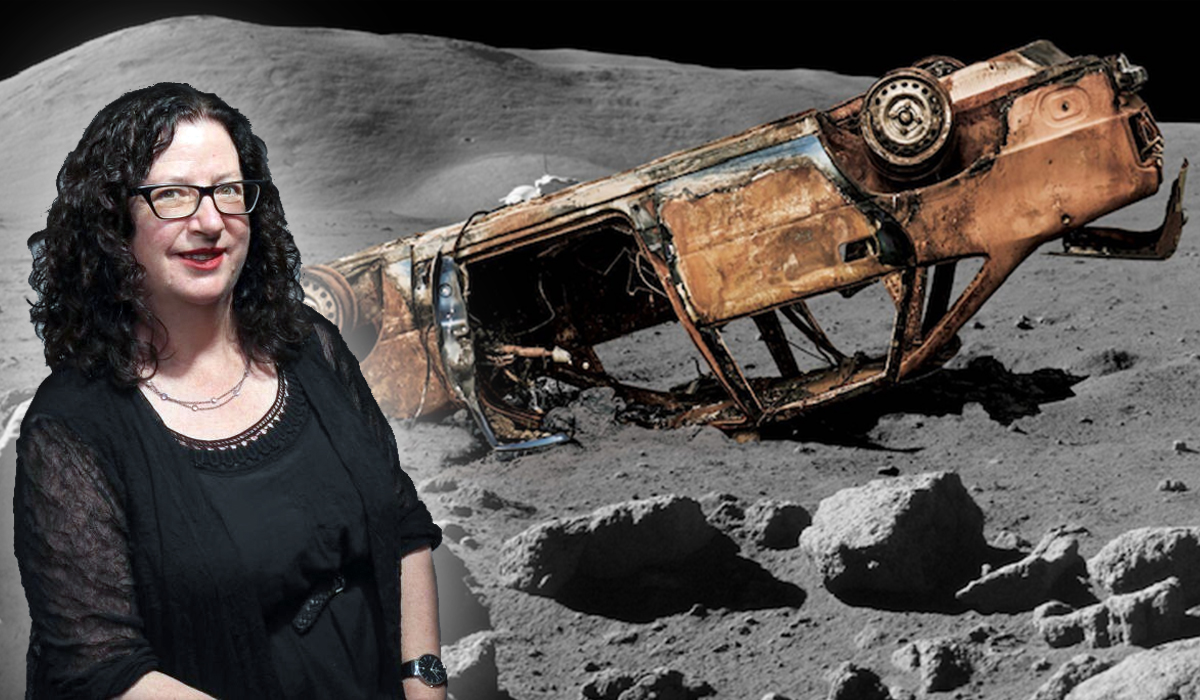 Dr Space Junk and mystery of the new past

Picture an archaeologist, and an unmistakably ‘earthy’ figure springs to mind. Perhaps they are popping up from inside a hole or next to an assuming stone wall, where they have been delicately fossicking about for some remnant of ancient civilisation. Perhaps this individual is coated with a light dusting of soil. Perhaps you (like me) are picturing Indiana Jones.

While she certainly gets dusty now and again on site visits to outback South Australia, Alice Gorman cuts a very different, very unique, figure against this pop culture caricature. Also known under the alias Dr Space Junk (from which she tweets to her 11k followers), she specialises in the rare field of space archaeology, applying a heritage understanding to human’s increasingly capitalist, overwhelmingly white patriarchal forays into the solar system, and the meanings we ascribe to these extraordinary quests.

In other words, she doesn’t just look down, she looks up. And her lens isn’t fixed to centuries past, but to contemporary times – from when humans began to leave traces of themselves in the place where our atmosphere ends, to the present day and beyond.

As her moniker suggests, Gorman’s professional identity isn’t mantled with the vainglorious pomp of space either. Her obsession is with the undervalued and overlooked: stuff that has been discarded or deactivated or somehow lost by humans and their technologies in orbit. Collision shrapnel. Dead satellites. Cable ties (with which she is singularly fascinated). Elon Musk’s $100k cherry red Tesla Roadster convertible, a disintegrating symbol of flashy masculinity, launched in 2018 and now cruising its way towards Venus. Also, astronaut poop.

This detritus is not all insignificant – in volume, cultural value or in terms of risk. A staggering 95% of the objects orbiting earth are classified as space junk, and it will be a while before large-scale debris removal happens, too. With all this stuff whizzing around the planet (weighing, by Gorman’s calculation, 1000 elephants), the worst case scenario looks something like Sandra Bullock screaming in hit blockbuster Gravity. In 2009, two satellites (one active) exploded into each other above Siberia. A few years earlier, the International Space Station’s window was chipped by a high-speed fragment, no bigger than a few thousands of a millimetre across. Anything larger than 10cm could shatter a spacecraft in pieces.

Space junk as a real hazard is an easy case to make. It’s easy to visualise, dramatic, and is tied up with concerns about property, money and social functioning (imagine the fallout if a multimillion-dollar communications satellite was destroyed).

Proposing that some of this junk might have heritage value to present and future generations is more difficult.

“Rockets are really sexy, people love rockets,” Gorman says. “But satellites and spacecraft can often be very mechanical and a bit opaque. They’re not objects that are easy to build a relationship with.

“All the same, people have incredibly strong relationships with all of the satellites in space orbit because they’re using what those satellites do every day, even if they’re not conscious of it. They’re maybe not looking up and thinking: ‘Oh righto, I’m using my phone to navigate my way to a meeting somewhere in the city that I’ve never been to before’.” One of the most important aspects of Gorman’s work is helping ordinary, non-techie people make those connections, giving ‘rubbish’ the chance to find redemption in our systems of meaning.

Released last year, the award-winning Dr Space Junk vs The Universe is her fascinating examination of this intersection between humans and the cosmos, past and future, technology and culture. Erudite, a little eccentric and certainly captivating, it thrums with a contagious curiosity for what you might otherwise mistake as mundane, while coursing into an associative network of asides – from US-trained ferrets, to Fifty Shades of Grey.

The book also has a particularly Australian bent. A former Indigenous archeologist, who pivoted mid-career after gazing up to see space junk sparkling in a Queensland night sky, her experience in heritage consulting informs her approach at every level.

“When I started to learn about space, one of the first things I thought about was, well, where are Indigenous people in all of this?” she says.

“I knew that Australia had a rocket launch site at Woomera, which had been one of the first few rocket launch sites in the world. Because I had been in the field out that way, I knew it wasn’t just dumped into an empty desert. Not only had there been Aboriginal people in that desert in the past, but the descendants of those people were still around and living in the area and still with the knowledge that they left.”

What, she wondered, is the actual heritage value of a space site? Who gets to determine this value? What voices and objects are telling our space narrative? What is the significance of a Sputnik-themed cocktail, or a playground rocket, or the fact that our planets are named after Roman gods?

For ‘junk’ that is deemed significant, what protocols can we put in place to classify and protect these artefacts? We saw this week when Rio Tinto blasted a 6000-year-old Aboriginal site the level of destruction that can happen when big companies fail to give due importance to heritage assessment. While space heritage is a very different and much newer category, we should nonetheless be asking ourselves what kind of cultural checks we should be placing on outer space projects before any such monstrous blunders take place.

Since we first conceived of it, space has been an ideological battleground, and Gorman sees questions of heritage and representation as critical to ensuring humankind doesn’t simply superimpose our crude and violent superstructures of inequality onto the cosmos. While she believes the sector is more receptive than it was, there is a long way to go yet. Space exploration continues to be dominated by very few countries or alliances, and “people who get to be part of space will tend to be affluent, highly educated people who don’t come from an underrepresented minority,” she says.

This week, SpaceX became the first private company to send people into orbit. It marks a major event in our Space Age story, tilting us further on a trajectory where affluent citizens may one day be able to book a flight to the moon, or a holiday to Mars.

US President Trump was present for the late-afternoon launch at Cape Canaveral, and gave it his typical jingoistic framing. “We will assert America’s rightful heritage as the greatest spacefaring nation on the planet,” he blustered. “The world has not yet seen the full glory of the American spirit.”

Gorman has a less brutish way to frame notions of space exploration. Before each of the chapters of her book, she has enclosed a passage of writing, delicately wrapping a gauze of meaning around some notion of the universe.

“I draw a lot of inspirational insight from science fiction writers, from poets, from science writers as well,” she says. “Sometimes a fiction writer can express what’s at the heart of an issue much better than someone who writes a 20-page academic article – as important as that is.” She speaks of early CS Lewis book that inspired her, the pellucid lines of Twitter poet Christine Rueter. How a reimagining of the tragic myth of Eurydice helped her give profound, personal shape to the moment when Pluto was approached by the US New Horizon spacecraft in 2015 – and then left in its wake.

“Here’s this little Pluto and this spacecraft is going to fly past and everyone’s going to be watching, it’s a huge deal,” she remembers. “Then the spacecraft will go on and it’s all alone in the dark again.

“That poem was such an important way of understanding that process for me.”

While small, these scattered literary inclusions speak to Gorman’s understanding of our multigravity ambitions as a symbiosis between science and poetry, research and reflective awe. It isn’t just technological innovation that propels our species into the heavens, after all. It’s because we can’t help but look up at the diamond-strewn dome of infinity above us, and wonder.

Dr Space Junk vs The Universe by Alice Gorman was published in 2019 by NewSouth Books. Find a copy at Roaring Stories Bookshop Balmain.