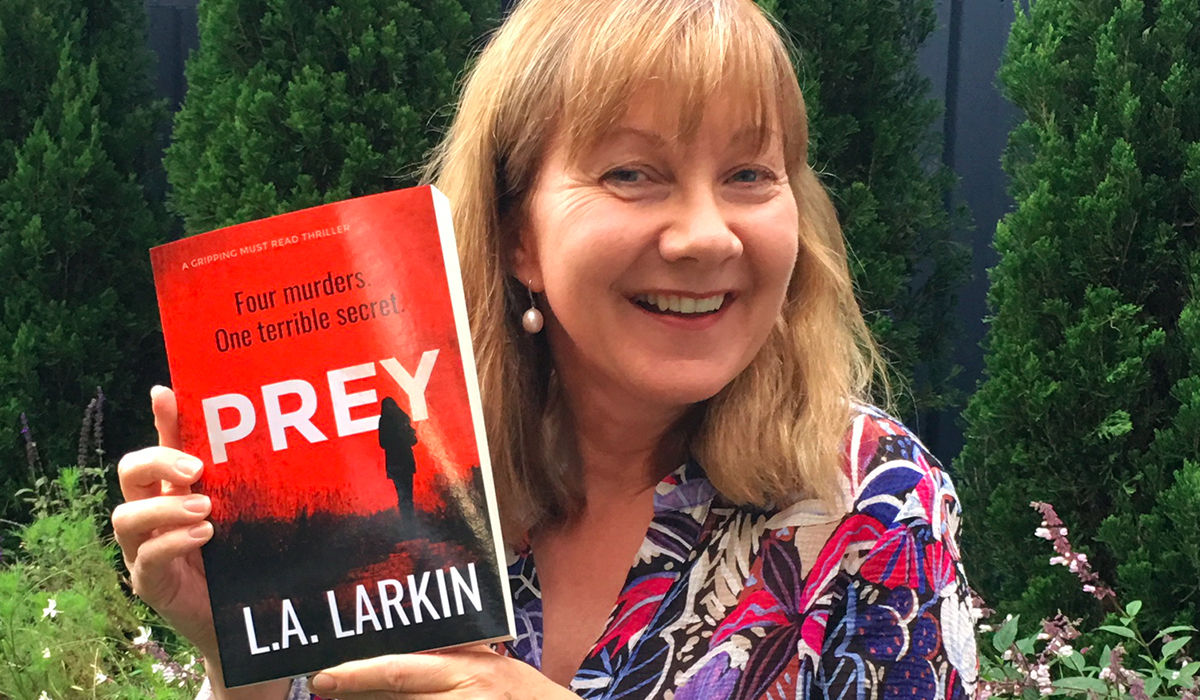 Haunted by the monsters she writes: Q&A with crime thriller author LA Larkin

Olivia Wolfe is just too dogged for her own good. The protagonist of LA Larkin’s new crime thriller Prey, this London-based, motorbike-riding journalist follows a trail of blood and money deep into danger, deceit and fear-slicked darkness. Leading her to the streets and savannahs of South Africa, Wolfe’s stalkers, allies and enemies include a former lover and suspected Russian spy, a South African cop suffering PTSD, a decidedly shady British Cabinet Minister and a Vietnamese billionaire with a sick taxidermy obsession. Not to mention a sadist assassin who decides she’s his next hit.

The Guardian has described Larkin as Michael Crichton’s “heir apparent”, and in this new novel, she plunges her readers headlong into a series of escalating, high-stakes action adventures. It’s a book for rapid devouring, with an ending that leaves an opening for a future appearance from the gutsy Wolfe.

In the lead-up to her online event with the BAD Sydney Crime Writers’ Festival, Roaring Stories spoke with Larkin on Prey, and the trappings and irresistible attraction of her trademark genre.

What led you into a life of crime fiction-writing?

I studied Literature at the University of London and promptly forgot about my aspirations to write a novel when I got sucked into the world of magazine publishing. It gave me a regular income, but it wasn’t fulfilling, and I longed to tap into my creativity. A few years ago, I came to a turning point in my life and decided to write a novel that had been buzzing around my head for a long time. I read widely but my favourite genre is crime-thrillers, so I began writing a thriller in my spare time which later became my first published book, The Genesis Flaw.

I love writing crime-thrillers because they are high-stakes, they move fast and are packed full of mysteries and plot twists, as well as intriguing characters tested to their limits. I’m now a full-time author but I occasionally teach creative writing at the Australian Writers’ Centre and I always advise my students to write what they love to read.

There are a couple of pretty gruesome scenes in your new book, Prey. In the final third in particular, we see our main character go to terrible lengths to outsmart her monstrous captor. Are these scenes ever difficult to write?

The sadistic assassin character in Prey haunted my dreams when I was writing the book. And his mysterious and powerful employer, a narcissistic psychopath, isn’t any better. I chose to give them chapters with their own points of view. This meant I had to write as if I was inside their heads. I had to understand them, give them a history and motivations for what they do. It meant delving into research on psychopathic killers which was pretty disturbing. My go-to books on this topic were The Psychopath Test by Jon Ronson and Mindhunter by John Douglas and Mark Olshaker. I was also very fortunate to meet with an FBI Special Agent in the USA who had hunted down serial killers for many years. She gave me a fascinating insight into her job and the killers she arrests. I have to tell you, I was in awe of her. I write fictional psychopaths. She comes face-to-face with them.

If you’re interested in finding out how authors cope (or not!) with writing fictional psychopaths, I’m interviewing psychological thriller author, Meg Gardiner, via Zoom on Saturday 18 July at 10am. Her UNSUB series delves deeply into the world of serial killers. This event is free and all you have to do is book via the BAD Sydney Crime Writers’ Festival.

Why do you think humans are so strangely attracted to imagined horror?

I think we are attracted to scary stories in books, TV series and movies because we are in control. We can shut the book. We can leave the cinema. Our lives are not really in danger. We get the adrenaline rush without risking our safety. We experience an adventure from our cosy bed at night, or in an armchair on the weekend with a comforting cup of tea. Perhaps because most of us will, thankfully, never face a killer or have to make a life-or-death decision, we want to imagine what it would be like to do so through the novels we read, like Prey.

I also think readers of crime-thrillers know that overall (not always, of course), the central character will survive, even if the ending of the novel is bittersweet. He or she will outsmart the antagonist. This expectation of the genre is a reader’s safety net.

Who are your own favourite novelists?

I read a variety of genres, including fantasy crime and general fiction so this list may surprise:

Prey’s protagonist, Olivia Wolfe, is a hard-as-nails badass heroine. Will we see her again in future books of yours?

I hope so. Olivia Wolfe is a character I really enjoy writing and she has quite a following from readers too, which is great. I think she’s interesting because she takes her role of investigative journalist very seriously; she’s so driven to expose heinous crimes and corruption that she unwittingly puts herself and others in danger. She knows how to defend herself but she is also vulnerable and gets hurt. In Prey, one of the big questions she must answer is whether she can trust her ex-lover Vitaly Yushkov or a detective, Dan Casburn, who has his own secretive agenda. If she gets it wrong, it could cost her her life.

Wolfe was inspired by a real investigative journalist, Marie Colvin, who reported for the Sunday Times until she was tragically killed in the bombardment of Homs in Syria in 2012. Like Colvin, my character has been a war correspondent. Also, like Colvin, she believes passionately that the truth must be told.