Killing Sydney, Elizabeth Farrelly’s hotly anticipated new book on the fight for a city’s soul, is one of the first major publishing events for 2021. Informed by her history as a architectural writer and former city councillor, Farrelly gives voice to the concerns many of us hold as we have seen Sydney change – the harm done to our built and natural environment, the heritage and cultural value that has been compromised by poor planning and careless politics, and the people and parties that have been complicit. With advanced praise from figures as diverse as Paul Keating, Di Morrissey and the Lord Mayor of Sydney Clover Moore, this book is sure to galvanise vigorous and important conversation and reflection on Sydney’s past and future.

On February 11, Farrelly will be speaking on the book with popular event host Sunil Badami. There are a limited number of seats available to see the event in-person at the Royal Oak Hotel Balmain. For the chance to win a free ticket, register through this online form here, talk to one of our friendly booksellers in store, or email marketing@roaringstories.com.au with your name, email, phone number and request for either 1 or 2 seats. Ticket-winners will be notified a few days before the event – all others who have registered will be put on a waitlist and contacted should seats become available. 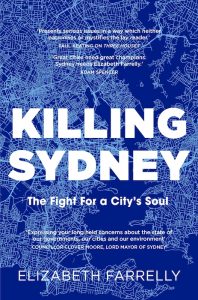 ABOUT THE BOOK
Columnist Elizabeth Farrelly brings her unique perspective as architectural writer and former city councillor to a burning question for our times: how will we live in the future? Can our communities survive pandemic, environmental disaster, overcrowding, government greed and big business?

Using her own adopted city of Sydney, she creates a roadmap for urban living and analyses the history of cities themselves to study why and how we live together, now and into the future.

Killing Sydney is part-lovesong, part-warning: little by little, our politics are becoming debased and our environment degraded. The tipping point is close. Can the home we love survive?

ABOUT ELIZABETH FARRELLY
Dr Elizabeth Farrelly trained in architecture and philosophy, practiced in Auckland, London and Bristol, holds a PhD in urbanism from the University of Sydney, and is an Associate Professor (Practice) at the University of NSW Graduate School of Urbanism. She was born in Dunedin, New Zealand but has made Sydney her home since the late 1980s. She is the author of several books, including Three Houses – a monograph on renowned architect Glenn Murcutt – is a Walkley-shortlisted journalist, critic and essayist, served as a Councillor for the City of Sydney from 1991 to 1995, and her portrait by Mirra Whale was a finalist in the 2015 Archibald Prize at the Art Gallery of New South Wales.

ABOUT SUNIL BADAMI
Sunil Badami is a writer, performer, broadcaster and Sydneysider. His work has appeared in publications in Australia and abroad, including Meanjin, Southerly, Island, Seizure, Best Australian Stories and Best Australian Essays.