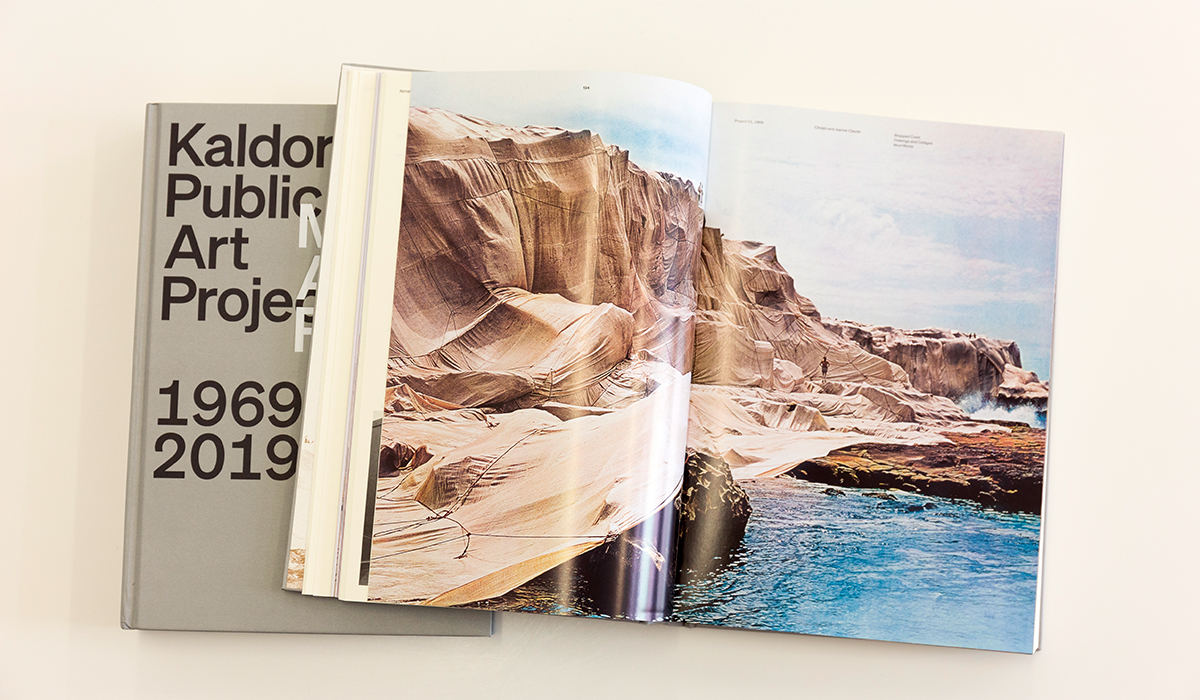 “A Kaldor invitation comes with the expectation to lift your game, to do something above and beyond your reach – this is its greatest value.”

So writes Ken Unsworth of Australia’s ‘artfather’ of avant-garde, John Kaldor, in a new book commemorating half a century of Kaldor Public Art Projects (KPAP) – his founding organisation and an incomparable enabler of some of the world’s most audacious, paradigm-shifting creators. A luminous, detailed and fascinating retrospective published in-house by KPAP, Making Art Public is a 523-page record of Kaldor’s legacy so far, and those whose dreams he has helped realise; a collector’s trove of ephemera and archival matter, original interviews and essays, reflections and history.

It is a beautifully produced item, honouring the story of a Hungarian émigré with his love of art and his ambition to share it with the public. Giving patronage, freedom and faith to international and local visionaries – from the artists Christo and Jeanne-Claude, to Serbian performance artist Marina Abramović, to Snowy Mountains-based postmodernist, Imants Tillers – KPAP has been a singularly transformative cradle and crucible.

It has launched new opportunities for the artists themselves (“John gave us space and possibilities that you can normally only dream of,” Abramović has said. “Everything was possible”). It opened up a portal and cross-flowing channel to what was happening on the art scene abroad. But perhaps most of all, it has facilitated highly memorable, unexpected and accessible encounters between the international avant-garde and everyday people – creating new audiences, appetites and forms of engagement.

With art long-held to be the province of the elite, appreciated by the gaze of connoisseurs above all else, the projects that KPAP puts forth are for the public and always free. Like Project 10, Jeff Koons’ enormous botanical puppy that stood guard outside the MCA in 1995, they demonstrate art as a domain for play, joy, humour and spontaneity; art which enables all manner of conversations and animates all kinds of responses. These qualities of Kaldor projects mean they have become part of a shared imagination, memory and identity, woven into the narrative of the nation itself.

It is an ethos that liberates both art and people, and was instilled within Kaldor as a boy – as Michael Landy writes in the book’s foreword (Landy was the artist behind last year’s Art Gallery of NSW retrospective of KPAP, to which the book is a companion). Before they arrived in Australia, Kaldor’s family found brief haven in France. Placed at age 12 in a class with four-year-olds, Kaldor reacted to his situation with rebellion. “This is way beyond my dignity,” he told his parents, who concurred. Accompanied by his mother, he became a truant flaneur in the streets of Paris, walking through exhibits at the Louvre and the Museum of Modern Art. When he became a textiles businessman as a young man, his love of contemporary art endured – leading him one day sharing a stale sandwich in a Soho loft, planning with Jeanne-Claude and Christo a radical, ostensibly insane endeavour.

“In the 60s and 70s Australia was very isolated from the world of international contemporary art,” Kaldor tells me over email. “I had the opportunity to travel and in the early 60s saw the emergence of Pop Art followed by Minimal Art – the paradigm changes. I wanted to share my love of contemporary art with the Australian public and to bring the latest developments of contemporary art to Australia.”

Edited by Genevieve O’Callaghan and Mark Gowing, Making Art Public gives form and collectible status to the dozens of projects his organisation has achieved.

Of particular value are the 60-plus pages of original interviews with 27 of the artists Kaldor has worked with, including Christo himself. Kaldor commissioned Hans Ulrich Obrist specifically for this task, and he too opens up to the eminent Swiss art historian – apparently a rare privilege afforded to few. (In a profile, Australian Financial Review compared interviewing the typically reticent man to “milking a mouse”). Obrist is a master at coaxing stories from his subjects, and the conversations – conducted over email, phone and in-person – call forth the unique characters and perspectives of each artist. There are some utterly delightful exchanges too, such as this one with Urs Fischer:

Obrist: “After so many years of experience, what would be your advice, in 2019, to a young artist?”
Fischer: “Well, I would say don’t listen.”
Obrist: “Sorry?”
Fischer: “Don’t listen.”

Spliced in the first third, in glossy full-page colour, each of the 35 projects the institution has presented up to 2019 are depicted in photographs. Wrapped Coast, the very first project in which the Little Bay coastline was wrapped in cream-coloured, soil erosion fabric. Ugo Rondinone’s melancholy Our magic hour rainbow gleams in the Sydney night in Project 13. And, from above, we see barrangal dyara (skin and bones): Jonathan Jones’ 2016 vast sculptural installation at the Botanic Gardens on the loss and destruction of Indigenous artefacts of great cultural significance.

The final half of the book is dedicated to the invisible and tremendous whirlwind of activity that goes into the making of a project. Browsing these pages is like an intimate journey through the contents of a flattened museum; in a patchwork of scans are all species of documents: behind the scenes photos and mindmaps, memoranda and itineraries, annotated correspondence, production notes and agenda.

There is the CAD drawing of Jeff Koons’ Puppy and the parti-colour bread slices used to create Coloured Bread. There is a neat sketch of the stilettos to be worn by the nude and semi-nude performers of Vanessa Beecroft’s VB40 (the heel is measured at 10cm high). Turn another page, and you see Urs Fischer applying a purple cast to his arm, which will become the mould for the limb swinging in Cockatoo Island installation piece, Imaginary Pain (Project 15).

Currently, KPAP is in its 36th project: do it (australia); an iteration of a long-established public-facing campaign launched by Obrist decades back, through which multiple artists give instructions for individuals anywhere to create artworks of their own. Eighteen artists supply instructions here: including Tracey Moffatt, Gerald Murnane, Amrita Hepi, nova Milne and Khaled Sabsabi.

That KPAP’s first-ever digital project happened during COVID was purely a coincidence, Kaldor’s personal assistant April Murdoch tells me. Future projects are, like so many others, stranded in a nebulous realm of uncertainty. But two artists that he is watching right now with interest, he tells me, are French/Albanian artist Anri Sala and Aboriginal Australian artist Jonathan Jones.

Coming in to sign the book at Roaring Stories on Thursday, Kaldor suffered with grace the flushed fan-girling of your writer (me) and loped in quietly. He was there too to pick up a copy of The Splendid and the Vile, which he’d heard was excellent. A tall man with a long face and gentle voice, Kaldor spent a moment wondering whether to sign Making Public Art with his full name, or just his first. In the end, opting for a pen fished from a jacket pocket, he affixed the former.

Should we run out of signed copies, he said with the hint of the sly, he would be happy to return.

The director of award-winning interior design company Hare+Klein talks her transient childhood, Nepalese master-weavers and the years-long journey of designing a home.