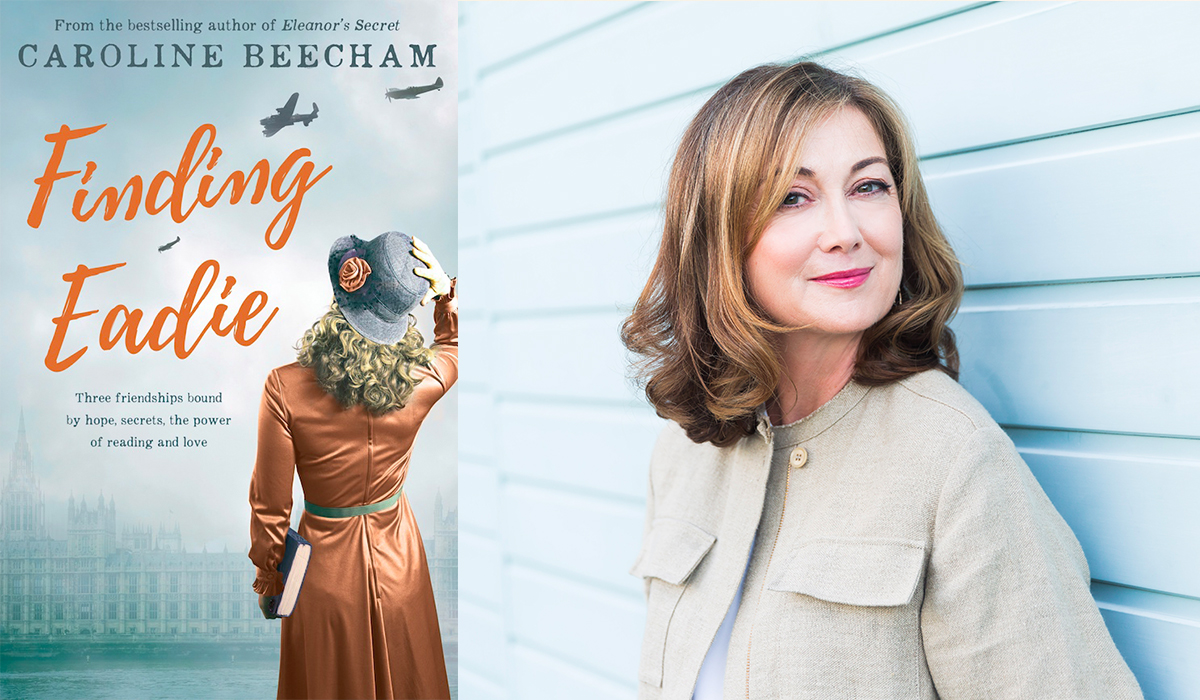 Finding Eadie is a mystery about a woman’s search for her stolen child. Its inspired by real events, and set in the publishing world of London and New York during the Second World War. It’s the story of a young woman, Alice Cotton, who shows extraordinary resilience as she manages to cleverly combine her search for her missing child with the challenge of creating much needed books during wartime.

The idea for the novel first came when I discovered a long-held family secret from a few generations ago; that a relative’s illegitimate baby was sold to a childless couple in a nearby town. At first I found it too uncomfortable to think about, but then I couldn’t stop thinking about it – and asking how and why?

It wasn’t until I looked into it further that I discovered how common these illegal adoptions were during wartime when there were even more unmarried mothers. Baby farmers were still active in the 1940s but thankfully there were also pioneering women like the social activist Clara Andrew, who fought to get the 1939 Adoption of Children Act passed to protect the rights of unmarried mothers and their children. And the journalist, Olive Melville Brown, who kept the baby farming story in the public eye; both these women were a real inspiration and I included them in the story.

I also wanted to write about books in wartime, having discovered how important they were when researching my earlier novel, Eleanor’s Secret. I’d learned that the public read even more – for distraction, entertainment and information – and so did the troops as they travelled and waited, between work and combat. The thought of how important it must have been for them to escape into different worlds really sparked something in me.

The characters worlds really crystallised when I found the settings for the offices of Partridge Press in Fitzrovia in London and Fifth Avenue in New York. There were a couple of books on the publishing history of London and New York that were key in my research: Print For Victory by Valerie Holman and When Books Went To War by Molly Guptil Manning. Did you know there was an area in New York called ‘Book Row’ that had seven blocks of books? And that the heart of the publishing industry in London was on Paternoster Row around St Paul’s until it was bombed in 1940? The smaller publishing houses had to relocate and many moved to Fitzroy and Bloomsbury, and some of the larger publishers offered them peppercorn rent. One of the main characters, Theo Bloom, grew up working on Book Row.

“He had spent his childhood discovering the landscape of each shop. He could have told you which one had the best corners for hide-and-seek or the best for browsing. By the age of twelve he could advise book hunters on the best store for ephemera and which ones specialised in history or philosophy. He’d devised his own tour that took book hunters from shops infamous for their erotic literature to those famous for first editions, then down into the basement of Schulte’s store, and to the three-sided balcony where book-lined alcoves were lit by bulbs that browsers had to turn on. Theo had planned it carefully, through a labyrinth that escalated the mystery and excitement accompanying the journey into any new book. Each store was unique, and to Theo, and the others who lived and worked there, 4th Avenue was a neighbourhood made of books as much as it was of bricks and mortar.” –  Finding Eadie, page 44

Although the seven blocks of Book Row is down to only two, this area is still home to dozens of interesting bookstores. I would love to visit one day, although I think I might have to wait a while.

Another really important setting for the book is London Zoo, which not only stayed open during wartime but thrived. It was free for servicemen to visit and the general public helped to feed the animals by saving acorns. Again, there were wonderful stories about real keepers and animals amongst the archives and I’ve included some of them in the book – they were so interesting and it seems like a good way of honouring them.

In the same way that the zoo was a sanctuary for the public during the war, it’s an important place for Alice to visit and feel safe, full as it of important childhood memories. Trawling through the magical and dusty archives at the Zoological Society of London was very special, and these photos capture a couple of those treasures you can find.

Now the book is finished I can see how much the setting has influenced the characters; it really is the small details that make such a difference in storytelling, whether it’s something that helps in creating character, or a unique setting that provides an authentic canvas for the story. There are lots of other fascinating real places and settings included in the book but I don’t want to give too much away. Hopefully readers will enjoy discovering them for themselves.

Finding Eadie by Caroline Beecham was published in July 2020 by Allen & Unwin. A limited number of signed copies available at Roaring Stories Bookshop Balmain. Learn more about the book.

Read an extract and review of Andrew Pippos’ debut novel, hailed as an ‘unforgettable epic’.