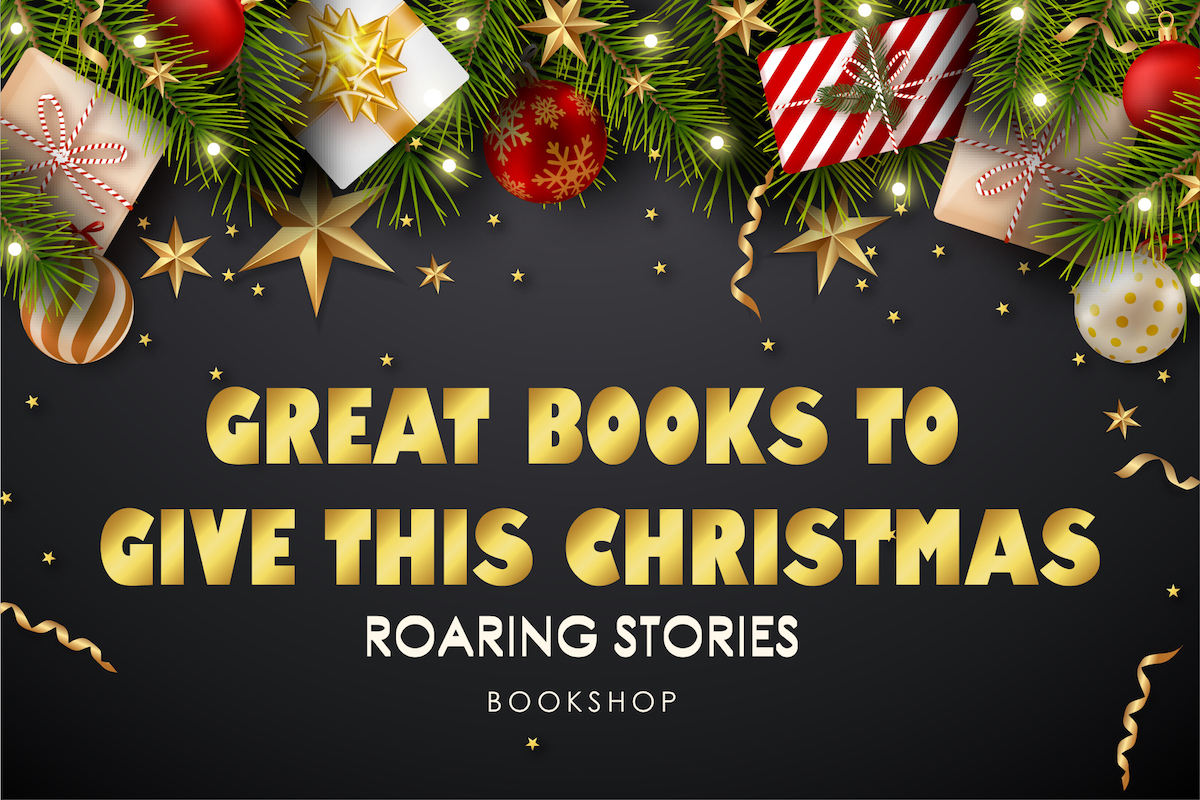 Great books to give this Christmas

Christmas time is here! Last-minute shoppers, scroll down for great gift ideas for readers across all ages and interests. Our little elves are providing free gift wrapping in store with a gold coin donation to the Indigenous Literacy Foundation – check out our holiday trading hours, and swing by this week!

Love & Virtue by Diana Reid (32.99) – Feminism, power and sex play out through the eyes of young Australian uni students in a contemporary narrative that is fiercely authentic. Read our interview with the author.

Devotion by Hannah Kent (32.99) – A new start in an old land. God, society and nature itself decree Hanne and Thea cannot be together. But within the impossible…is devotion. Read bookseller Sylvia’s review of the book.

Wild Abandon by Emily Bitto (32.99) – This lyrical and devastating new novel from the Stella Prize-winning author of The Strays offers us startling and profound visions of the world and our place in it.

Crossroad by Jonathan Franzen (32.99) – Set in a historical moment of moral crisis, Crossroads is the stunning foundation of a sweeping investigation of human mythologies, as the Hildebrandt family navigate the political and social crosscurrents of the past fifty years. Read bookseller Tim’s review of the book, his favourite of 2021.

The Magician by Colm Toibin (32.99) – An epic imagining of Thomas Mann, where Colm Tóibín captures the profound personal conflict of a very public life, and through this life creates an intimate portrait of the twentieth century. Read bookseller Bron’s review of the book.

Oh William! by Elizabeth Strout (29.99) – Oh William! is a luminous novel about the myriad mysteries that make up a marriage, about discovering family secrets, late in life, that rearrange everything we think we know about those closest to us, and the way people continue to live and love, against all odds.

Sweet Jimmy by Bryan Brown ($29.99) – Bryan Brown has been telling stories with his distinctive Australian voice on TV and in film for a long time, but this time he’s writing crime in his first book. Watch the livestream of our event with Brown.

Silverview by John le Carre ($32.99) – Silverview is the mesmerising story of an encounter between innocence and experience and between public duty and private morals. In this last complete masterwork from the greatest chronicler of our age, John le Carré asks what you owe to your country when you no longer recognise it.

The Apollo Murders by Chris Hadfield ($32.99) – Internationally bestselling astronaut Chris Hadfield is back with an exceptional Cold War thriller from the dark heart of the Space Race.

The Way It Is Now by Garry Disher ($32.99) – Then the skeletal remains of two people are found in the excavation of a new building site—and the past comes crashing in on Charlie. The enthralling new novel from Garry Disher, one of Australia’s most loved and celebrated crime writers.

The Dark Hours by Michael Connelly ($32.99) – LAPD Detective Renee Ballard and Harry Bosch team up to find justice in this new thriller from No. 1 bestselling author Michael Connelly.

April in Spain by John Banville ($29.99) – As a terrifying hitman hunts down his prey, they are all set for a brutal showdown. The sumptuous, propulsive, sun-kissed follow up to the bestselling Snow, from the Booker Prize winning author.

These Precious Days by Ann Patchett ($29.99) – In her new collection, with her trademark blend of wryness, intelligence and wisdom, she explores family, friendship, marriage, failure, success – and how all these forces have shaped her as a writer.

How to End a Story by Helen Garner ($29.99) – Helen Garner’s third volume of diaries is an account of a woman fighting to hold on to a marriage that is disintegrating around her.

Home Truths by David Williamson ($49.99) – The definitive memoir of David Williamson, author of iconic dramas such as The Removalists, The Club, Don’s Party, Emerald City and Travelling North, as well as more than fifty other plays, explores the life of the writer and the true stories and real lives that inspired his works.

Bourdain in Stories by Laurie Woolever ($29.99) – For the first time, we have been granted a look into Bourdain’s life through the stories and recollections of his closest friends and colleagues.

Everything I Love to Cook by Neil Perry ($59.99) – An entirely new-look Neil Perry that surpasses anything previously published and is everything you need to know to cook like Neil at home.

Indian Cooking Class by Christine Manfield ($59.99) – Join Christine as she shares her knowledge, love and deep respect for the vivacious and piquant dishes at the heart of India’s fascinating culinary heritage.

Home by Stephanie Alexander ($59.99) – Home is a collection of more than 200 original recipes by Stephanie Alexander. Each recipe is a finely crafted tribute to her passions and preferences for produce and flavour, and each reflects her consummate skill in communicating the fundamentals of technique.

A Cook’s Book by Nigel Slater ($55.00)– From the first jam tart Nigel made with his mum standing on a chair trying to reach the Aga, through to what he is cooking now, this is the ultimate Nigel Slater collection brimming with over 200 recipes.

Take One Fish by Josh Niland ($55.00) – Forget everything you thought you knew about fish cookery with Take One Fish. There are no rules when it comes to cooking fish according to James Beard award winning chef Josh Niland, only an endless world of possibilities.

Test Kitchen by Yotam Ottolenghi ($49.99) – From the New York Times bestselling author and his superteam of chefs, this is Ottolenghi unplugged: 85+ irresistible recipes for flexible, everyday home cooking that unlock the secrets of your pantry.

Banksy: Completed by Carol Diehl ($39.95) – There’s more to Banksy than the painting on the wall. The first in-depth investigation into the mysteries of the world’s most famous living artist.

1000 Years of Joys and Sorrows by Ai Weiwei ($32.00) –  Hailed as “an eloquent and seemingly unsilenceable voice of freedom” by The New York Times, Ai Weiwei has written a sweeping memoir that presents a remarkable history of China over the last hundred years while also illuminating his artistic process.

Costa’s World by Costa Georgiadis ($45.00) – The long-awaited book from the beloved host of ABC TV’s Gardening Australia Bringing together all of Costa’s gardening and sustainability knowledge, this is a book for the whole family that reflects Costa’s philosophy and quirky sense of fun. Watch the livestream of our event with Costa.

Life at the Edge by Jo Turner ($59.99) – Capturing that often inexplicable feeling of being in, near and around water, this book is a photographic celebration of Australian coastlines, rivers and waterways.

Twelve Summers by Adam Zwar ($32.99) – For actor and writer Adam Zwar, every memorable moment in his life is tied to cricket. Twelve Summers is the story of those big memories and the big matches that accompanied them, told by one of the funniest writers in Australia. Watch the livestream of our event with Zwar.

You Can’t Stop the Sun from Shining by Sonny Bill Williams ($49.99) – For the first time ever, sporting legend Sonny Bill Williams is telling his story. Working with Alan Duff, award-winning author of Once Were Warriors, this will be the must-read autobiography of the year.

Waterproof by John Ogden ($72.68) – WATERPROOF features the work of Australia’s leading surf photographers from the first known photograph of the Australian surf zone through to 20th century boom in surfing and the contemporary scene.

The Lyrics by Paul McCartney ($155.00) – In this extraordinary book, with unparalleled candour, Paul McCartney recounts his life and art through the prism of 154 songs from all stages of his career.

Nina Simone’s Gum by Warren Ellis ($39.99) – From award-winning musician and composer Warren Ellis comes the unexpected and inspiring story of a piece of chewing gum. Featuring an introduction from Nick Cave.

Best Wishes, Warmest Regards by Daniel Levy, Eugene Levy ($49.99) – The ultimate celebration of the series, the town, the characters, and the state of mind that is Schitt’s Creek. Capturing the essence and alchemy of all six seasons this official, lavishly illustrated book is a gift to fans everywhere who have made the show their own.

The Storyteller: Tales of Life and Music by Dave Grohl ($55.00) – From hitting the road with Scream at 18 years old, to jamming with Iggy Pop or playing at the Academy Awards, Grohl shares his memories of a rich life of rock n roll.

Will by Will Smith ($35.00) – The ‘Event’ Autobiography of the Year – a brave, inspiring and wildly entertaining memoir full of self-help lessons for readers, from one of the world’s most charismatic and much-loved actors.

Depeche Mode by Anton Corbijn ($250) – Featuring over 500 photographs from Corbijn’s extensive archives, and created with the full collaboration of the band,  Depeche Mode by Anton Corbijn (81-18) trumpets how one man’s original aesthetic, that has encompassed all of their photography, most of their music videos, album graphics and set designs, helped shape the band’s enduring popularity.

The Library by Arthur der Weduwen, Andrew Pettegree ($49.99) – Princes, collectors, bookworms and thieves: the extraordinary story of the library, from Alexandria to the age of Google. ‘A sweeping, absorbing history, deeply researched, of that extraordinary and enduring phenomenon: the library’ – Richard Ovenden.

Books that Made Us by Carl Reinecke ($12.99) – Australia’s novels lie at the heart of the country. Capturing everyday lives and exceptional dreams, they have held up a mirror to the nation, reflecting the good and the bad. In this companion book to the ABC TV series, Carl Reinecke looks at the history of Australian culture through the books we have read and the stories we have told.

The New York Times Book Review by the New York Times ($74.99) – From the most influential book review in America, here is its best, funniest, and most memorable coverage over the past 125 years. Vintage photographs, fascinating reviews, never-before-heard anecdotes, and hilarious off-the-mark pans of now-famous works.

Around the World in 80 Books by David Damrosch ($45.00) – A transporting and illuminating voyage around the globe, through classic and modern literary works that are in conversation with one another and with the world around them.

Sapiens A Graphic History, Volume 2 by Yuval Noah Harari ($39.99) – The second volume of the graphic adaptation of Yuval Noah Harari’s global phenomenon and smash Sunday Times #1 bestseller, with gorgeous full-colour illustrations and a beautiful package – the perfect gift for the curious beings in your life.

There’s a Ghost in this House by Oliver Jeffers ($29.99) – Step inside and turn the transparent pages to help her on an entertaining ghost hunt, from behind the sofa, right up to the attic.

Marcie Gill and the Caravan Park Cat by Monica McInerney ($19.99) – Marcie hasn’t had a great start to the Christmas holidays. But then something magical happens, involving a Christmas competition, a black cat and a wishing stone. Marcie discovers that if you wish hard enough, dreams can come true.

Wandi by Favel Partett ($19.99) – A dingo cub is snatched from his family and home by a giant eagle, then dropped, injured and alone, in a suburban backyard. This is the beautifully woven story of Wandi, the most famous dingo in the world. Told with wonder and heart by one of Australia’s most beloved storytellers.

Somebody’s Land by Adam Goodes, Ellie Laing ($24.99) – An accessible picture book for young children to connect with First Nations culture, acknowledge the hurt of the past, and to join together as one community with a precious shared history as old as time.

The Boy and the Elephant by Freya Blackwood ($24.99) – The boy lives in a city, where everything is fast and loud. But amidst the bustle and the noise, the boy has a secret … In the overgrown lot next to his apartment building, deep within the green, he has a friend. But one day progress arrives, bringing with it plans for something new, and the boy must find a way to save his friend before it’s too late.

What We’re Reading in January

Here’s what our Balmain bookshop staff have been reading these summer holidays.

‘I suppose I was willing everything, including me, back to life’: Q&A with Tim Ross on Scorcher

Get your last-minute holiday shopping done at Roaring Stories! See our opening hours from 20 Dec – 2 Jan.