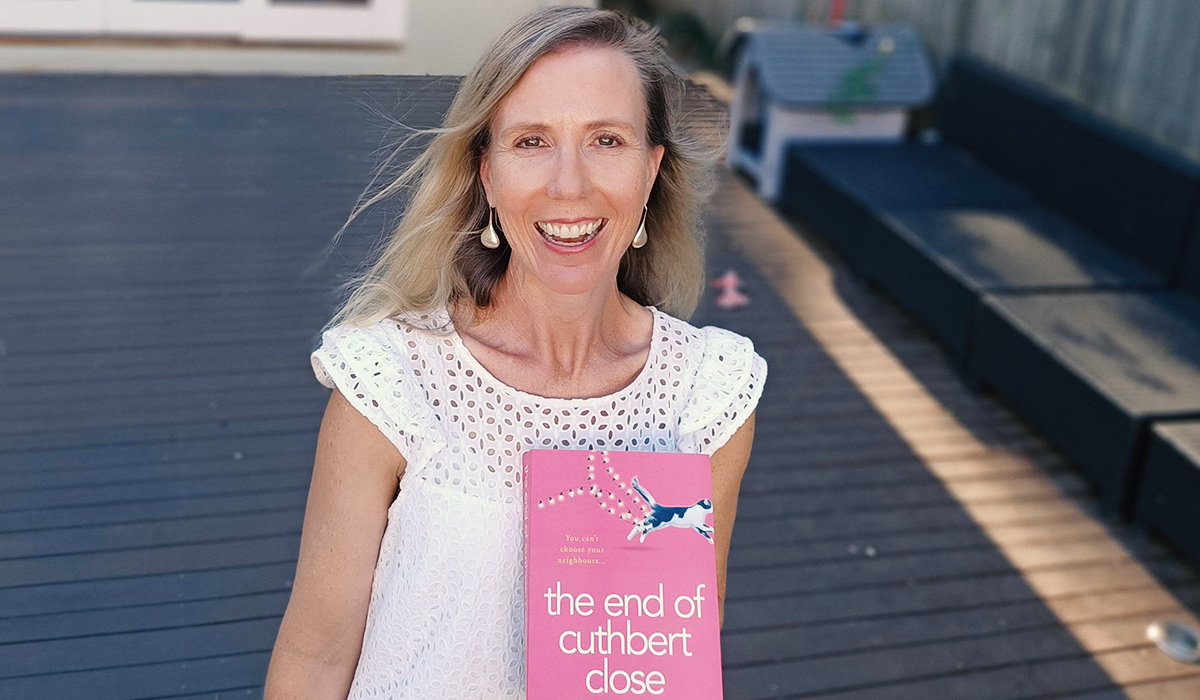 Cassie Hamer really did try homeschooling her three children – house-bound under the new edicts of our dystopian world. But after just a few days she was (in her words) sacked. It wasn’t her calling. Fortunately, her hands-on husband stepped up.

“He’s now the principal of our homeschool and I’m sort of the teacher’s aid,” Cassie laughs. She’ll help out with tricky English concepts, and be on call when dad needs a break. Otherwise, she has judiciously retreated.

She might be relieved from teacher’s duty, but focusing on her full-time job as a writer hasn’t been easy. It never is after a book launch – she knows this from experience, having released her acclaimed debut After the Party last year. With her new novel The End of Cuthbert Close now out in the world (if sitting a little lonely on unvisited bookstore shelves), she’s restless to begin sketching out another. But the squalls and scampers of little people in other rooms have ransacked her six precious hours of quiet time, and upended the disciplined routine she once kept. On a good day, she’d be cranking out 3000 words just in time to pick up the kids from school. This halcyon age has ended, and abruptly too. Cassie finds it quite ironic that isolation – normally such a privilege for an artist – isn’t particularly conducive to productivity in its COVID-19 form.

But there’s another reason for her creative stoppage. Emotionally and psychologically, she’s exhausted by the pandemic: it’s surreal power to dismantle lives, structures and certainties; its deadly aura; and the way it has overwhelmed all kinds of speech.

“When the first crises started unfolding, I just had this insatiable need to consume all the news about what was happening,” she confesses. “It was sort of like I felt if I stayed in touch with the information, I could somehow stave off the inevitable. That the more information I had, the more control I had. But actually what I discovered was, it drags you down.”

Slipping back into that glorious river of creative flow has eluded her. For any writer, this paralysis is distressing. The fact it comes at a time when writing new worlds could help bring her solace is even worse.

As a coping strategy, she’s begun a coronavirus journal; a daily response to what’s going on. It’s a therapeutic exercise: “a way for me to process some thoughts and almost evacuate them from my head so that I can clear some mental space for the creative work,” she explains.

While making some progress on a fresh manuscript, “it’s very much baby steps,” she sighs. “I feel like I’m inching my way through darkness, trying to reach out my fingers through the cracks of light.”

The life journey of The End of Cuthbert Close hasn’t quite got to plan either. With its official launch cancelled, it was instead hailed from the kitchen table with a champagne bottle pop and a gaggle of supportive kids around her in a Facebook Live event.

Cassie can still find some silver lining in the fact that Cuthbert Close arrived for readers now. A lighthearted tale of friendship and mystery, she believes it can do a lot of good taking people’s minds off their more depressing realities.

That the novel deals with relationships between neighbours makes it acutely relatable too. Thanks to social isolation measures, the people living next door have never been more present, and getting to know them has never been more likely.

This has both tremendous potential for community and friendship, and is also highly fraught. The book was inspired by Cassie’s own experiences of the street where she lives, and she has made a lot of happy memories and friends there. Before the lockdown, “it wasn’t unusual for us to go out into our back lane on a Sunday afternoon and have some drinks with the neighbours while the kids scurry up and down on scooters,” she says.

But she has also shared fences with some shockers. Party house teens who left puke in the alley. A paparazzo agency head who could be heard yelling at his photographers how exactly they were going to stalk that married man. (I wince as I recall my recent abode in an apartment of paper-thin walls, where an escort next door would begin blasting Linkin Park at 5.30am, and have volubly operatic orgasms at 2am.)

“A bad neighbour can really make your life hell,” agrees Cassie. “It’s hard to be empathetic if someone is ruining your life.

“But everyone has a reason why they behave the way they do. I wanted to explore in the book the way we make judgments about our neighbours based on those small glimpses of them that we get. It’s a sort of cautionary tale: those glimpses aren’t the full picture.”

Now that neighbours are all up in each other’s space (and sound radius), it has never been more important to at least try to get along. Before we start allowing resentments to fester, deploying petty vendettas, or launching all-out warfare, communication and a willingness to broker peace are vital.

Despite scenes of soccer moms squabbling over bog rolls, Cassie is hopeful a more goodhearted humanity will prevail. ‘Corona-kindness’ is flourishing in small and big ways. Her own family have recently been on the receiving end.

Finding no gluten-free Weet-bix on the shelves for her celiac daughter, Cassie put out a tongue-in-cheek post on Facebook – essentially laughing at the unsuspecting hoarders storing piles of “concrete rubbish” in their cupboards.

A couple of days later, boxes of the cereal appeared on her doorstep. Her neighbours had gone out of their way to get her kid her (gross, but necessary) brekky.

Her back lane neighbours have also created a WhatsApp group, where they can exchange favours, share resources and seek help.

“I know that if I really got stuck for something I could just put a shout out on that,” says Cassie. “I’m quite sure that one of my neighbours would come to my rescue.

“We’ve seen in this health crisis that people do want connection and they especially want connection in their local community. Sometimes it’s just about making that first move,” she says. “In some ways I think this crisis will trigger people to make that first move because we’ve realised that the only way we’re going to get through is if we’re together.”

The End of Cuthbert Close was published in 2020 by Harper Collins, and is available at Roaring Stories Bookshop.