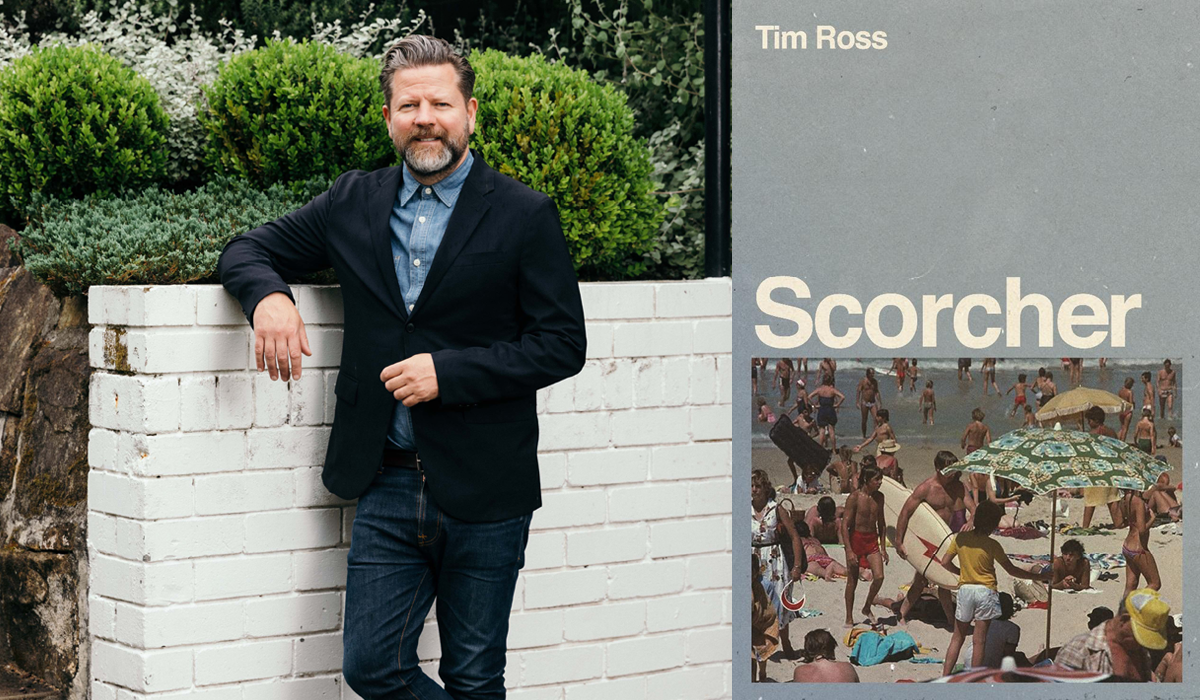 ‘I suppose I was willing everything, including me, back to life’: Q&A with Tim Ross on Scorcher

Scorcher is a book for and of the Australian summer. A beautifully produced collection of short stories by comedian and radio host Tim Ross, it is interleaved with old photographs from the National Australian Archives – of dazzling blue backyard pools, bronzed bodies slick with sunscreen, endless beaches, hot paved driveways, and other images soaked into the mythology of our hot urban coastlines. Wistful, nostalgic – with the high temperatures depicted far removed from the current anxieties of climate change – the vignettes in the book take us for a shimmering moment into the lives of young boys and men, forming memories of what summer will come to signify to them. These moments, you feel sure, would be the ones that return to these characters when they catch the scent of chlorine, or feel the first hot wind as the season turns, or hear the wobbly, syncopated creak of an old fan when the mercury climbs high.

I read Scorcher on a sunny day on my porch with a glass of lemonade – a perfect arrangement. Read our Q&A with Tim below.

The stories in your collection Scorcher read like memories – arriving on a hot gust from Australian summers gone by. How did they come to you?

I was spending a bit of time at the beach during lockdown and found inspiration there. Everything was pretty empty, the local pool was closed and like a ghost town. I suppose I was willing everything, including me, back to life. My writing always reflects a moment in time and this book reflects where I wanted to be.

The creative process for me is walking or running and thinking. These stories percolated in my head at the beach and I’d sometimes record ideas into my phone or write them on a pad and then do the tappy tappy on the computer later.

Each story is presented in vignette form, less concerned with plot than with evoking a feeling. What attracts you to this kind of writing?

Sadly, years of radio taught me to condense things and I’ve rallied against that in my live shows and talks but it has sort of stuck around with my writing. I like painting pictures of small moments in time, I suppose they are a bit like bringing a photo to life.

I admire those who write long form but I tend to roll around with simple and quite tight stories.

I self-publish so I can make up my own rules on how long my books are or what form they take. There’s a wonderful freedom to that.

While Scorcher is a work of fiction, it seems to ring with a powerful truth about your relationship to family, boyhood and the beach. How did your love affair with the Australian summer come about?

I think we romanticise summer and they loom so large in our memories because we have holidays, romance and of course family Christmas. I’m interested in the frailty of young men, something that wasn’t recognised when I was a boy.

I like oscillating between memoir and fiction and the fiction allows me to explore different ideas and quite frankly, take a break from banging on about myself.

Nostalgia suffuses these pages, as does a tenderness to its characters – many of them young boys or men, captured in a moment which may appear insignificant, but will likely imprint powerfully on who they will become. What do you think it is, that makes Australian culture so uniquely nostalgic about the summer?

The beach has filled our days in a hot country and they are a source of national pride. They reign supreme because they are for all of us, like our delightful free bbq’s, they remain potent symbols of our egalitarian spirit.

They are also experiences that have remained largely unchanged for generations and that links us together over time.

The book is particularly striking for the old, high-saturated colours photographs which appear frequently in between stories – of beaches, diners, backyard pools, low-slung brick houses and other scenes of the pre-20th century Australian summer. Where do these photos come from, who took them, and why did you decide to publish them alongside the written stories?

They are all from the National Archives of Australia and I added them because when I was looking for the cover shot I found so many great ones I just had to add more.

I think they add a great deal to the experience of the book and are an effective way of punctuating the stories.

Scorcher by Tim Ross can be found at Roaring Stories Bookshop Balmain.