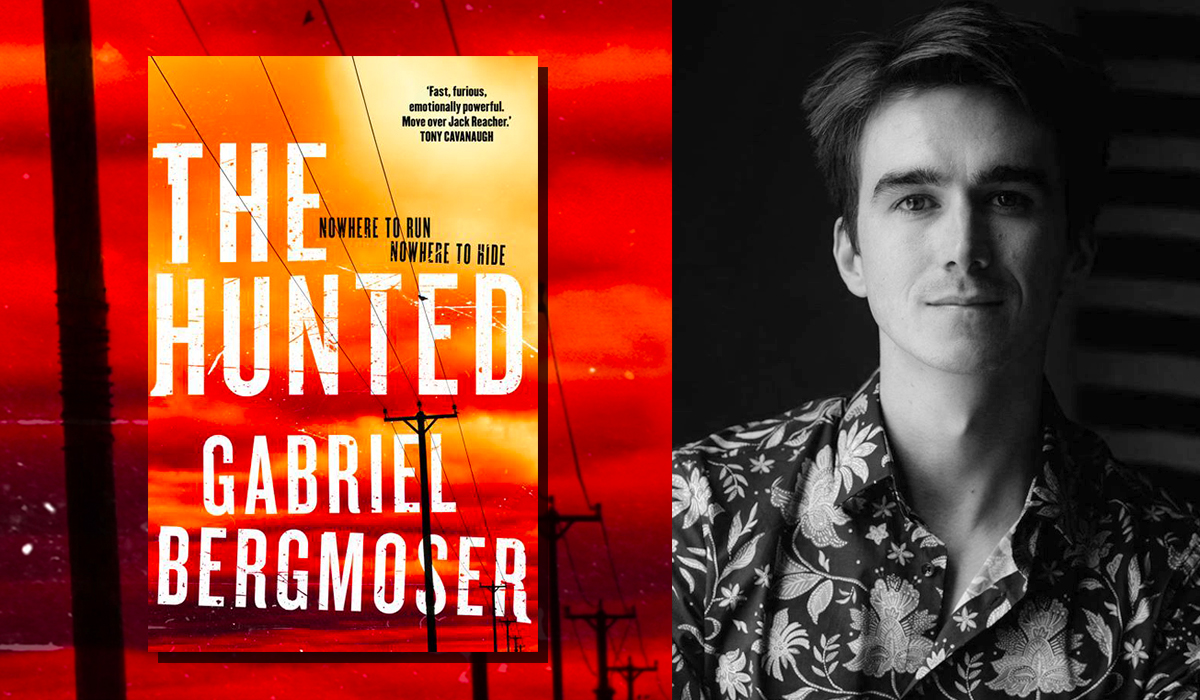 The Hunted is a book from which blood pours. A menacing, ruthlessly paced thriller heaving with mutated forms of vaunted Australian masculinity, it has been billed by publisher Harper Collins as the blockbuster novel of the year, with a film version in production. You will read it, sweat, and upon wiping your brow have to check the slick on your hand isn’t red.

It’s a new kind of work for the 28-year-old author. Gabriel Bergmoser has won awards for his scriptwriting and published several books for young adults, but this is by far a different kind of beast, and his first foray into horror.

The ugliness it awakens is familiar in the cultural canon of this nation. Like Wake in Fright, Wolf Creek and Snowtown, the reader is ripped from the familiar and hurtled to some blasted, godforsaken hole in the Australian outback, where the white Australian idea of mateship has festered and become warped. Competitive violence reigns as a sport, and the soft-palmed city boys who romanticise Kerouac are the height of contempt.

Buried deep in the battered off-track, a small community has formed around what civilisation spat out. Here steps Maggie, a survivor of domestic abuse, searching for answers and with a feckless journeyman in tow. When her quest goes awry and they finds themselves prey, it is the self-exiled gas station owner Frank – together with his visiting granddaughter, Allie – who must decide whether to confront new enemies or let lie old demons. What ensues is a series of primal confrontations: a crucible furnace of fire and judgement, cloaked from the world by an endless sea of arid grass.

Now living in Melbourne (the oft-mocked hipster capital of Australia), Bergmoser spent his formative years in a small country town. His experience growing up there stains the themes of the book.

“That particular brand of Australian masculinity, the type that writes off acts of violence and intimidation as ‘just a joke’ until it’s not, was something I dealt with a lot as a kid,” he says. “I think there are isolated pockets of this country where that conception of what being a man is can fester and become corrupted due to a lack of accountability. In The Hunted it’s taken to the extreme. “

“That’s not to say I’m adopting a roundly critical view of your quintessential Aussie bloke,” he adds. Frank also embodies such an archetype – rough, taciturn and stubbornly self-sufficient – and he is “maybe the most decent character in the book”.

Still, like Maggie, Frank is a natural-born killer. When they must, both know how to take a life. It comes easy. For the anti-hero Maggie, there is even relish in this, a vengeful triumph that can unnerve.

“What I find fascinating about Maggie is that her capacity for violence is kind of like her superpower,” says Bergmoser. “She is fuelled by rage and an almost animalistic killer instinct that she’s constantly fighting to keep down. But when backed into a corner, she’ll unleash it in a heartbeat. Almost like she’s just looking for an excuse.

“Does that make her a monster? It certainly makes her someone who has a lot to work through if she’s ever going to find anything like peace.”

“In the end, Frank and Maggie were both forged by violence but what differentiates them is that they haven’t succumbed to it in quite the same way as the hunters.”

Bergmoser is an “unabashed” fan of horror, with Jaws, Psycho and The Silence of the Lambs his top-rated movies and Red Dragon his favourite book. “I regularly bore friends to tears discussing the minutiae of the Nightmare of Elm Street, Exorcist, Omen and Ring franchises,” he writes.

“It does kind of beg the question of why it took me so long to write something that was at least in the territory of the genre,” he admits. “But the truth is that I think horror is at its best when it has something to say, something that makes it more than just jump scares and gory deaths. It was imperative to me that The Hunted fulfilled that mandate and despite having the idea for years I didn’t start writing until I knew what the book was thematically going to be about.”

The Hunted began as a film treatment – then a short story, then a novella – and finally this August, a novel. It will come full circle again as a joint film production between Stampede Ventures and Vertigo Entertainment. While the two are LA-based companies, the shoot will take place in Australia.

“For the most part [it] will be pretty faithful to the book, but there are some big changes that will surprise people – including a couple I wish I’d thought of while writing the novel,” says Bergmoser.

“The thing is, what works on the page doesn’t necessarily work on the screen and vice versa; it’s why I never understand Harry Potter fans getting mad at the films cutting stuff from the books. It’s a completely different medium, and if the adaptation is done well you basically get two alternate versions of the same story that hopefully complement, rather than contradict, each other. I think that’ll be the case with The Hunted but it’s way too early to tell.

“What I will say is that the attached director has been a brilliant collaborator and he loves this story if possible more than I do. I can’t wait to see it.”

Bergmoser is not waiting idly however. Currently, he is working on several TV shows, a few new plays, a web series, and is contracted to write three more books for Harper Collins. Two of these are young adult novels (The True Colour of a Little White Lie comes out in March next year).

The third is a sequel to The Hunted.

The Hunted by Gabriel Bergmoser is available at Roaring Stories Bookshop from 31 July. Read more about the book.