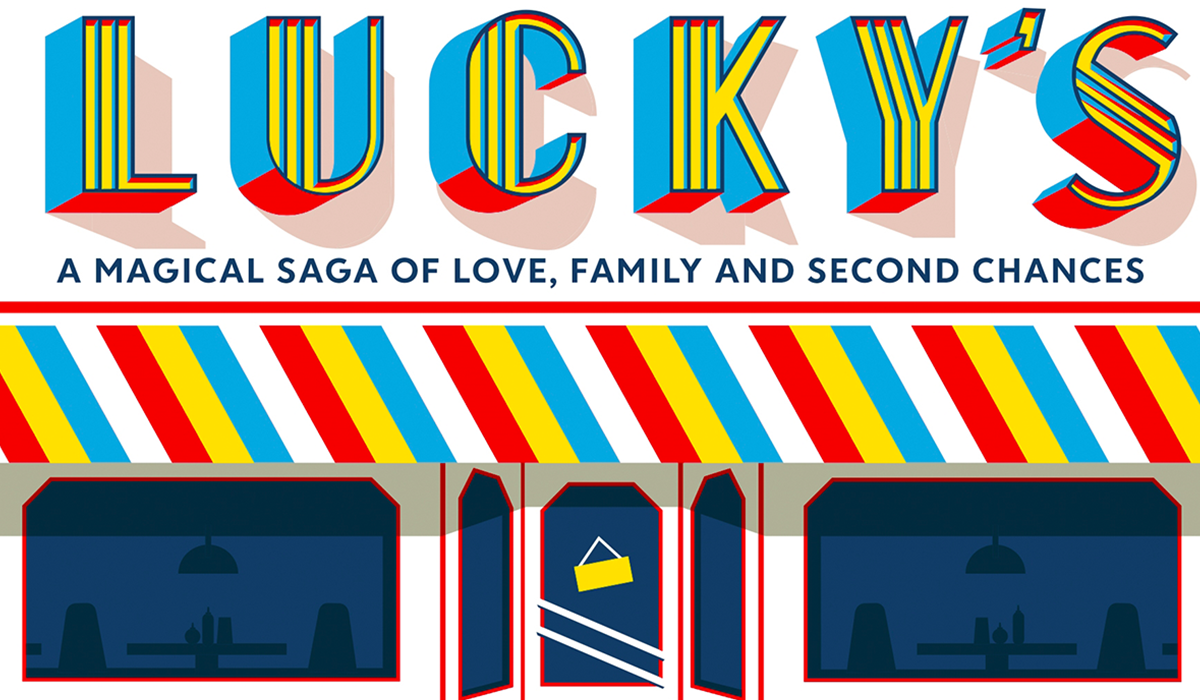 Bright, fresh and bold, the cover design of Andrew Pippos’ Lucky’s is a fitting match to this brand new voice in Australian publishing. It is Pippos’ debut novel, a charming, multilayered tragicomic family saga about an American immigrant of Greek heritage nicknamed Lucky, and the rise – and fall – of his restaurant franchise.

Pippos himself is a child of the lost era of family run Greek diners: his grandparents had their own in Brewarrina, a town in the north-west of Sydney. Like the fictional Lucky, their menu was assimilationist rather than authentic. Instead of pastitsada and kleftiko, there were soda fountains and familiar, American inspired fare. It was a business necessity: the Australian palate was too culturally suspicious to swallow anything with a foreign sounding name. As Pippos told the Guardian: “My grandmother and my uncle were best at cooking Greek food, but that was something private. It was the best food, and it was hidden.”

Lucky’s celebrates this culture, hidden but flourishing among diasporic communities. Spanning almost a century, hopping back and forth decades and perspectives, it is also an exploration in the quest for self-realisation – how it can undo us, deceive us, and ripple into consequences we can never have imagined. For all characters, the struggle to become who they wish to be conspires with other impulses: like greed, violence and self-interest. And then, of course, there are other forces at work beyond their control, like bigotry, sexism, family responsibilities, and the treacherous hand of fortune.

Full of unforgettable characters, and rich in warmth and humour, this novel is one to devour. Take it with you to Sofie’s or Greek Door on Darling Street, and savour it with a dish you’ve never tried – they serve Horta, Kleftiko, Moussaka, Spetsofai and more.

Below, find an extract from the book, in which we meet the character Achilles.

The Cafe Achillion played a precursor role in the story of Lucky’s restaurants: it was the prototype from which Lucky worked; it was the home he corrected. His restaurant franchise reproduced the architecture of the Achillion and its colours, the style of silverware, the window displays, the oval plates and menu. Even the idea of a franchise did not begin with Lucky. That dream—a proliferation of Achillions—first belonged to Achilles Asproyerakas, whose destiny warrants description. The regulars called him ‘Mad Achilles’, though never to his face, never within earshot. To some customers, Achilles functioned as a bogeyman, a child-frightener, the devil’s substitute in the suburb of Bardwell Park, Sydney. Parents told naughty children that if their behaviour did not improve quick smart they would be sent down to the cafe, where Mad Achilles would punish them in the terrible ways that people suffered in myths and fairytales.

Achilles had left the island of Ithaka at the age of sixteen, carrying his father’s amber worry beads in his pocket. His uncle, a Sydney fishmonger, offered to sponsor the boy as long as he lied about his age to immigration officials. Achilles’ father explained that the offer amounted to peonage, that the first few months in Sydney might be harsh. He was a fisherman and each month went further and further out into the Ionian Sea: on the boat he spoke broken Italian in an attempt to fool the fish into thinking he was bad at his trade. ‘The sea is a secret underneath,’ his father said. ‘Much better to work in a fish shop than to ever be a fisherman.’ Achilles’ mother, who agreed, told her son that he must stay unmarried, pay off the debt to his uncle, succeed in Sydney, and come home to remove his parents from the peasantry.

When Achilles did return to Ithaka, twelve years later, on a second-class passage, he was class IV bald like his father. His worsted suit had been purchased with money made cutting cane on sugar plantations in southern Queensland, where Achilles worked after quitting the fishmongers in Sydney, tired of being exploited by casually cruel blood relatives. Most important, he brought back a large opal ring he thought might impress someone—somebody who wouldn’t realise or mind how desolate he was inside. Achilles wanted two things: a wife, and money to build a cafe. He hadn’t bothered to bring back presents for his family. In a paper shop in Circular Quay he’d looked at postcards and considered these as gifts, but thought better of it. Did anyone in Ithaka send him cards? Did anyone anywhere? By now his parents had long ceased to harbour expectations of Achilles as a provider in their old age. Whole years had passed in which he did not write to them, and they thought he was out of reach, his life itinerant. At times they feared he was no longer alive.

If the village of Vathi had changed much, Achilles could not tell. He did not care. His parents’ home was a square building of whitewashed walls with a pitched roof and a yellow front door that faced Mount Neriton. He sat down and told his mother and father what he’d been meaning to say for a long time: they sent him away too young. He wanted them to look guilty and squirm; he would have thanked God for the sight of his parents sobbing. They did not weep.

Sitting at their dining table, a felt hat hooked over his knee, Achilles made little effort to hide his disapproval of everything (their table was unsteady, his coffee not sweet enough), and it occurred to his mother that Achilles might have been angry with them on a day-by-day basis, year after year, when they’d spent that same time in various degrees of worry and regret over him. Now this was the result. The three of them could hardly have a conversation. To Achilles, the rain on the village and the dark condemning sky approximated his feelings and offered him a kind of support.

‘You should be ashamed of sending me away,’ he said. ‘We wouldn’t have done it if we’d known you’d be this unhappy,’ his mother replied. ‘But you’re here now. Why don’t you make a life in Ithaka or even Kefalonia?’

By this time Achilles had acquired the heated, brisk tone of voice that would characterise him for the rest of his life. A marriage was quickly arranged with Eleftheria, the artistically minded daughter of the village tailor, and they were wedded on 22 August at The Chapel of the Transfiguration of the Saviour in Vathi.  The combination of her dowry and his savings would give them enough money to start their own cafe in Sydney. Achilles already had the spot picked out.

Lucky’s by Andrew Pippos was published in October 2020 by Pan Macmillon. Signed copies available in store.

Gabriel Bergmoser on his fast-paced new Australian thriller, The Hunted.