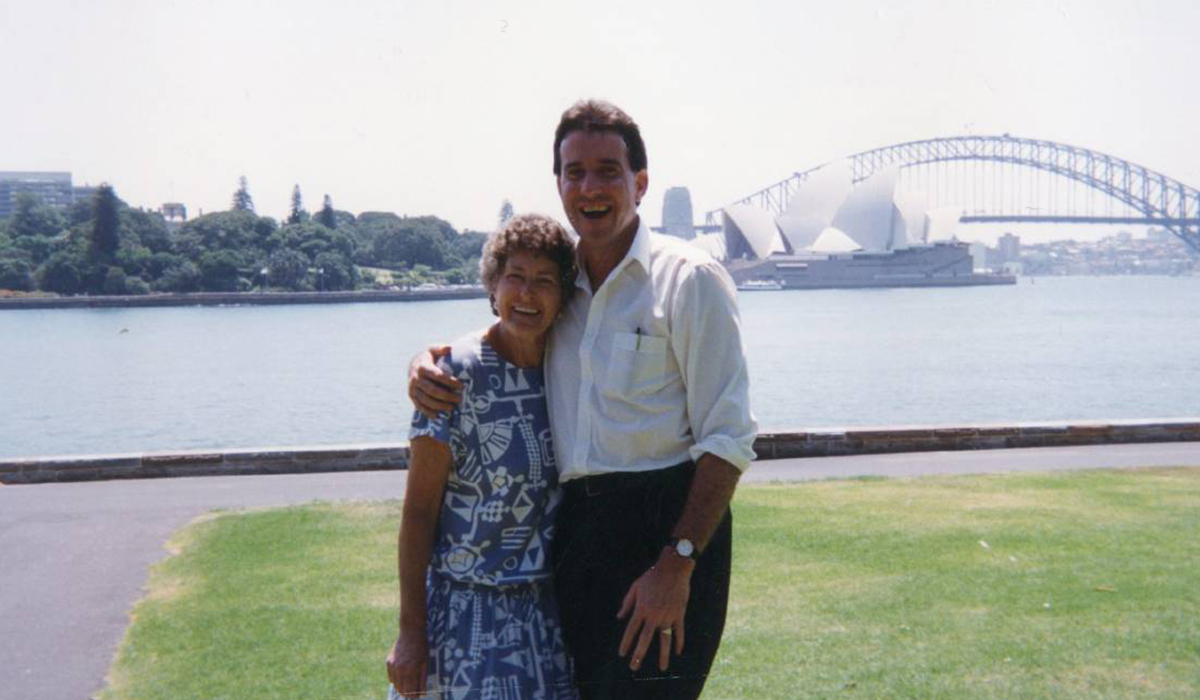 In the mid nineties, Robert Tickner was working a hundred hours a week as an Australian Federal Minister. His public life was one of intense pressure and turbulence, in which the responsibilities of public office pressed against him every day. At the same time, something very momentous was happening in his private life which very few people knew about. For the first time, he was about to meet his birth mother.

Robert Tickner is just one of thousands of Australian children forced up for adoption in the mid 20th century by a system built on  profound sexism and prejudice against single mothers. It was a fluke of good fortune that placed him in an adopted family of love and privilege. For this mother Maida, however, the shame-filled sacrifice was a life-shattering event, from which she would never recover.

Ten Doors Down is the story of the late reunion between a parent and child, and a repudiation of the state-sanctioned processes which forced them apart. A deeply personal account written with tender honesty and replete with uncanny coincidences, it is utterly unlike most novels published by former politicians.

Before the virus closed the shutters of our city’s cafes, Tickner, a Balmain local, sat down with Roaring Stories at Casual Mondays to talk about the book.

Ten Doors Down is about the love of not just one family, but multiple families. Tell me a little bit about your experiences being raised as a young country boy by your adoptive parents.

It was just a tiny little town in lots of ways. I lived five houses from my primary school. I’d jump on my push bike and ride about three blocks to my high school where I joined the Scouts. That was on the opposite corner to my house. I took piano lessons on the other corner. I had a great love of the surf and surfed the beach called Pebbly Beach and immersed myself in surfing culture.

I worked hard at school and just was showered in love by my parents, Gwen and Bert. Really I’ve had a wonderfully privileged life. Many others have had very different lives – sometimes tragically, a very unhappy or even mistreated life. I won the lotto. I had the mum and dad who just loved me to bits. Though I always knew I was adopted, I never worried about it. I was completely comfortable in my skin.

When the law changed in the nineties, and I was able to seek out my birth parents, I didn’t. I had lived a lot by then. I had become a government minister. My adoptive dad had passed away but my mum was still alive, and I had a fierce loyalty to them. They had given me everything. I’m embarrassed to say, I didn’t really appreciate that out there in the wider world was a person in the form of my mother who was grieving every day of her life. It was the birth of my son Jack that was the transformative thing that caused me to lift the contact veto.

You were 41 years old when you were reunited with your birth mother. What was that encounter like?

Magical really. Surreal. We met on the Opera House steps. It was a mixture of emotions. At one stage I was terrified like a little kid, then I felt as powerful as a bulldozer, bullet proof and able to do anything.

I’m a little bit tentative in talking about it. I honestly believe that no bloke, no male, could really understand the grief of a mother who has given a child up for adoption. My mother’s pain was palpable when I met her and really, she wasn’t ready to have this massive intrusion into her life.

She had worked 27 years for a Paramatta Council on the front counter, taking complaints from customers. She was a Liberal-voting woman living in a house in Lansdowne Street, Maryland, a street I knew so well, and all of a sudden comes this whole other world. I was living life in the fast lane. I was very different in every way. My work, my values.

It wasn’t just our politics that were different. It was an enormous shock to her to find out not only that she had a son, she had a grandson. She was fragile, and fragile to the extent that she was very much on the edge. She needed to take it step by step. She’d had one conversation with her husband, Greg, who became my stepdad. One conversation about the adoption in all those 37 years. It was like walking on eggshells at first.

There’s an extraordinary and quite distressing story behind the title of your book, Ten Doors Down. Can you tell me about that?

The coincidences were almost beyond comprehension. Without knowing her name, without knowing where she was, I wrote a letter to my mother as an introductory letter. I took photographs from the Tickner photograph album at random to send too. One of the ‘at random’ photographs I chose was a photo of me at my adopted grandmother’s house at 18 Lansdowne Street, Maryland. So I put that on the back of the photo,”Me with my grandmother at 18 Lansdowne Street, Maryland”. When my mother gets this letter, she’s living 10 houses away – ten doors down – from that address, and has lived there since 1957.

This was like a body blow. A destructive revelation, leaving her trying to fathom how on earth this could have happened. Trying to remember if she saw me in the street as a small child.

She did know my grandmother. She remembers her vividly sitting on the verandah. She knew my auntie who lived at Number 6 Lansdowne Street. She knew the Italian lady in the street who I used to call “Miss Ezzy”. How freaky is that? We took quite a while to get over it.

The next photo that I enclosed in the same letter was even stranger than fiction. It was a photo of me on Santa’s lap in 1955. My mother sees it, and finds it similar to a photo she thinks she has. She goes to her photograph album and she finds a photograph taken of her twin sister’s son Darryl, in exactly the same year, with exactly the same Santa. My mother was present when that photo was taken. It was also taken directly opposite Paramatta City Council – where my mother had worked for years.

When you meet someone who is hugely significant to you and your life but also at the same time a stranger, how do you even begin to explain who you are and what you’ve become?

I just had to reassure my mother right from the beginning that I had a wonderful upbringing. I did that because I wanted her to know I hadn’t suffered.

Nonetheless, I had this other conflicting thought: what if she thinks I had this wonderful, happy life while she was having such a terrible life? Am I punishing her more? Then of course I realised that she was driven absolutely by love for me and my wellbeing, and because I had a good life she was happy. She even put a photograph of my adopted mum and dad, Gwen and Bert Tickner, up on her mantlepiece.

Getting to know each other was a staged process. She was like a babbling brook of revelations, coming up with names and places and family references. I was struggling with all that. It was made easier by Greg, who adored my mother. Because of his generosity of spirit, we just started the relationship, and within a very short period of time she met my son Jack, my then wife Jody, and Jade, who’d become my daughter through marrying Jody. They fitted perfectly.

There were a lot of false steps. When my mother ventured too far, things reminded her of the adoption and she would have a relapse. It took five years before things started to really settle down completely. But I’d already made an absolute decision which I communicated to her: I’m here, I’m not going anywhere.

What is forced adoption, and why can it be so traumatic?

It was another world. Back then, if you were a woman and you had a child out of wedlock, the stigma was extreme. The pressure to give up a child was like a tidal wave of prejudice that was almost impossible to resist.

With that prejudice came a whole adoption industry. The number of people impacted through the fifties to the seventies is estimated at half a million people. It often causes overwhelming grief and suffering for the relinquishing mother and in many, many cases the adopted person too – for one reason or another.

But it also affects the grandmothers, it affects siblings who find out that they have a lost brother or sister out there, it affects the children of the adopted person, because if you don’t know the family links you can’t really place yourself in the family history.

I need to stress that my story is my story. It’s what happened to me. Most people come nowhere near my very fortunate outcome. I not only met my birth mother, but my birth father, and while fraught, these were positive reunions.

Ten Doors Down was published in 2020 by Scribe Publications. Find it at Roaring Stories Bookshop.

A chat with the former ADF chief and Governor-General on his new memoir, You Shouldn’t Have Joined.