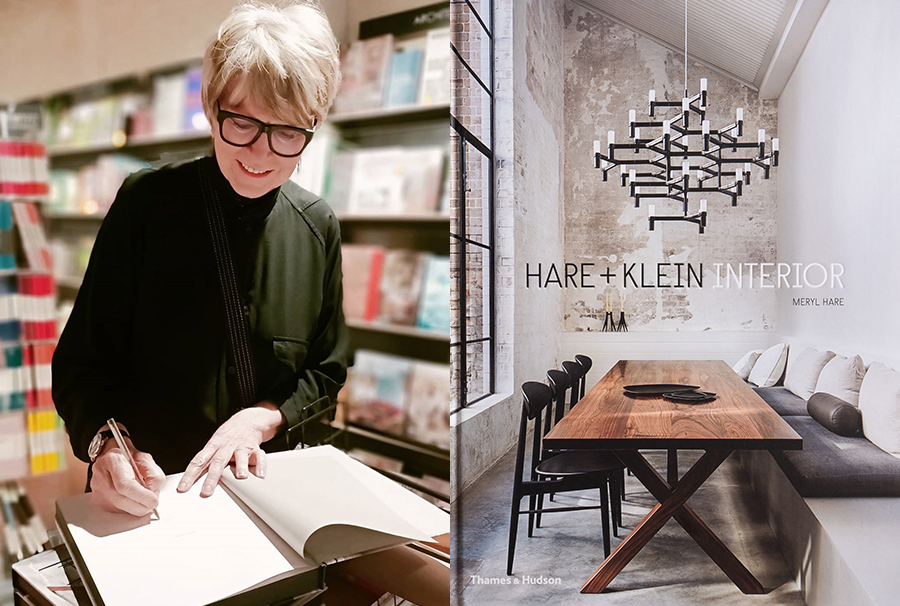 Her company name is synonymous with considered elegance, tasteful function and welcoming grace. On the high ridges of North Sydney, in coastal alcoves and leafied tablelands; in bungalows, apartments, rural cottages and family homes, the nation’s aesthetes inhabit the real estate she has transformed – their domestic movements, routines and pleasures intimately sculpted by the decisions she and her talented team has made.

Yet Meryl Hare’s own home life as a child was not one of aesthetic comfort. The daughter of an Anglo-American mining company man based in Africa, every promotion her father received meant a family uprooting – first in Zambia, then Swaziland.

“We lived in company houses for most of my growing up,” Hare remembers, sitting across from me in the cluttered back room of Roaring Stories Bookshop. “We never stayed anywhere for very long … No, I did not grow up in a beautiful home.” Her mother, a homemaker, hated it. Meryl adapted.

“I think I learnt along the way to create my own environment in each of those transient houses,” she says. “That you could still make your space something special. For me, to be surrounded by beauty, that just lifts my spirits. Even if I wasn’t growing up in a stable home as such, I always made my environment pleasing to me.”

Now living in Sydney, Meryl Hare is one of Australia’s most prestigious interior designers. Founding the award-winning Hare+Klein in 1989 (the second name honouring her late husband) she has earned rank in the DIA Hall of Fame and the Australian House & Garden Hall of Fame. This year, the company released a second work with publisher Thames & Hudson, Hare+Klein Interior. A luxurious and highly collectible volume with black end-papers and glossy colour photographs on almost every page, it is a monument to Hare+Klein’s achievements and a bounty to the reader seeking inspiration. Where the previous book was co-authored with David Clark, former Editor-in-Chief of Vogue Living, in Hare+Klein Interior it is Hare’s voice alone that provides written commentary on each project, giving personal insights and reflections on the journey towards the finished home.

For Hare, the book is far more than a marketable product to showcase the brand. Rather, it is primarily a work of conservation, and a duty honoured to her team. Projects can take five years to complete, and every designer, architect and decorator involved will commit themselves utterly to the task. Hare will see her staff coming into the office haggard following sleepless nights, fretting about some niggling design problem. When they do complete a job, the moment is almost bittersweet. Much like a commercial artist, for a second their creation is their own – and then they must relinquish it, to whatever end.

“Sometimes you’ll finish a job and your client will sell, or somebody dies. Or for whatever reason, it’s not as you intended. You have this little window in time when you can photograph your work … It’s almost the responsibility to the team to print it. Somehow a book is better than a website.”

Hare is design director on each project (for balanced decision-making, a second director always joins her). Enriching lives through design is central to her professional philosophy, and she will immerse herself completely in the intricacies of a home and its elements. Her passion is no more evident than when I ask her the story behind the hand-woven Nepalese rugs that feature recurringly in the homes featured in the book. At the question, her eyes light up, and she begins an animated discussion on the cultural and political history of the trade – which is now the country’s largest foreign export – and of how she came to better understand and appreciate the artisanal work.

The company has two design collections with Designer Rugs (a third has just been announced), and each product takes 20 weeks to arrive in Australia. Chatting with the owner one day, Hare wondered aloud why it took so long. “And he said, ‘’Well why don’t you go and see?’ So I went over with two of the people from Designer Rugs to Kathmandu in Nepal. It was a real eye-opener.”

She visited three manufacturers, and saw the entire process – the weaving, the stretching, the drying, the dyeing – unfold. Everything was done by hand.

The drying happens on the roof of the warehouse, and – her heart in her mouth from the rather flimsy tiles – Hare clambered up. On a rooftop to her left, she saw a mother washing her daughter’s hair. Down below, a wedding was in full swing.

“We walked along the tiles, and I suddenly saw a rug that I’d designed,” she said. “It was the first time I’d seen it made. It was amazing. Just lying in the sun, drying out.” She took a picture of this moment, which made its way into the final print version of the book.

It is an incredibly intimate thing, to change a home. It requires an acutely refined ability not only to listen, but to interpret the ways in which a family or individual chooses to live their private lives. What subtle yet mysteriously profound pleasures can be got from the way the curvature of a corridor draws the eye; the way the morning falls in through a window and breathes light into a room; the painting that presides above the dining table and colours family feasts. How lovely it is for the tones, forms and textures of an owned space to cleave just so to one’s uniquely configured comforts.

“Finding the balance between our aesthetic and our clients’ needs and aspirations is at the core of our ethos of enriching lives through design,” Hare writes in the book. “There are no hard and fast rules about how we go about achieving this, but it’s something we try to practice every day, on every project, and it’s grounded in the belief that the homes we create should be authentic and much more than mere shelters.”

While consultation and collaboration are vital to her work, Hare can get quite creative in her read of a client. She recalls a client in Melbourne; a vivacious woman whose home was brimming with eccentric objects. While the designers were in, the woman popped off to do a bit of shoe shopping, returning some hours later with “the most incredible shoes I’ve seen,” says Hare. The luxury heels were made of red silk, with a clear perspex base. Shimmering inside the transparent casing was an enormous jewel.

“I’m sorry but you’re not wearing those,” Klein had said with a mock firmness. And she placed them in a display nook. The client was pleased, and not at all put out that her heels had become an art piece. (She did return to the store for a pair she could actually wear out.)

While she is not beyond the vagaries of her industry – nobody can be – Hare is not one to slavishly follow trends. She has figures she respects – the late French designer Christian Liaigre is one, Patricia Urquiola another. But “I think we paddle our own canoe,” she says. “You work instinctively with what you’ve got. You start with a brief and certain criteria and out of that you make hopefully something that’s pleasing.”

If there is a signature aesthetic to Hare+Klein, it is attention to detail. For this reason, Hare made the professional decision to eschew the piecemeal early on in her career. Her company specialises almost exclusively in large-scale projects – ambitious renovations and new architecture – which envisions a home as a composite, unified and harmonious whole.

“It’s not because we think we’re grand or too clever,” says Hare. “When you take on a project, it’s the most important part of it is the concept. All the creativeness comes out of that. Then you follow through and create a design language that runs through the whole project. It’s very hard to do just a room, or advise somebody ‘I think you should paint your door black’.

As we speak, Hare has a particularly personal design project ahead of her. She has recently downsized, relocating to Cammary in Sydney’s north. “I was beginning to feel trapped,” she says. A number of her furniture items will make their way into Sydney’s auction houses. But – like the beaked African mask she acquired on a cycling trip overseas – she will be holding onto her most prized collector’s items.

She has known from a young age, after all, how to make her lived environment her own.

Hare+Klein Interior by Meryl Hare was published by Thames & Hudson in July 2020. Signed copies are available at Roaring Stories Bookshop.