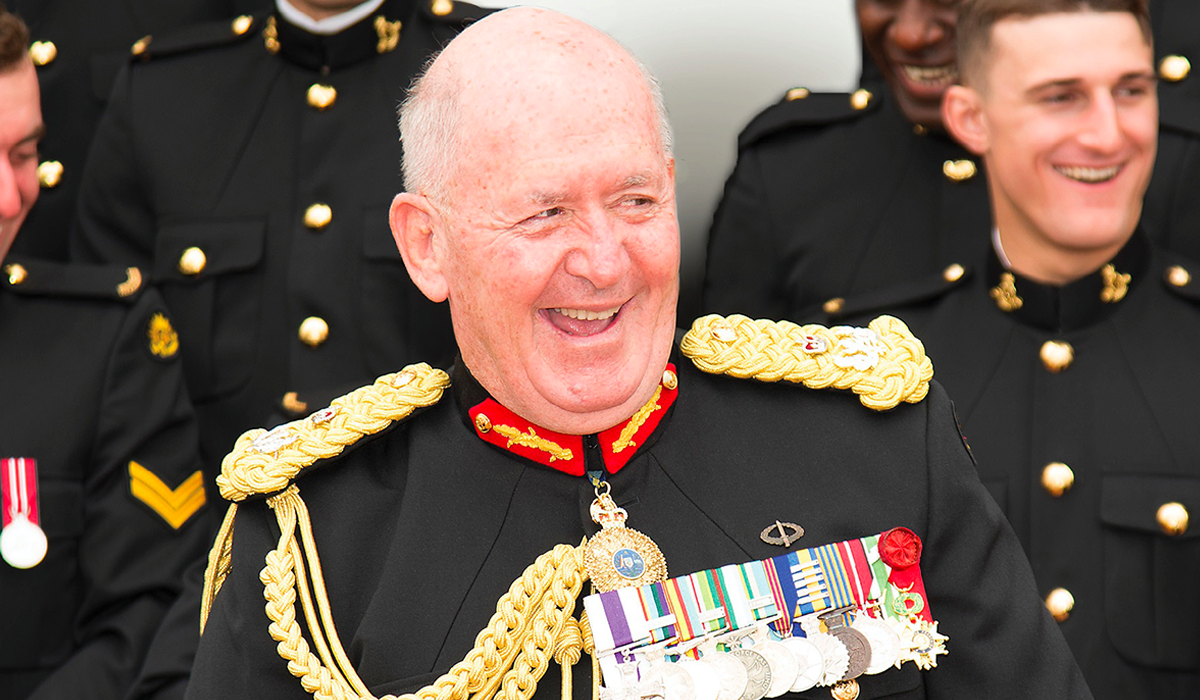 “Excuse me, I’m looking for some books by AA Milne,” said the woman to the former Governor-General and Chief of the Defence Force. She had mistaken General Sir Peter Cosgrove, who had just finished signing copies of his new memoir, for a Roaring Stories bookseller. Store owner Daniel Jordon rushed in to assist, and lead the woman down to the children’s book section.

He was still helping with her enquiries on Pooh when Cosgrove walked past for our interview at the back of the store.

“Found it alright?” he asked amiably.
“Oh yes!” said the woman. The books, she explained, were for her five-year-old grandchild.
“Advanced for her age?” asked Cosgrove.
“She is, very!”
“She’ll be Governor-General one day!” Cosgrove chortled. A mischievous grin flashed on the 73-year-old’s face as he strode away.
“Oh!” exclaimed the woman, floundering in the wake of such a claim.

It wasn’t until some time later that she realised the joke. She turned, we were told, red as a beetroot.

This exchange is a perfect sketch of a man who – despite his many laurels and high-ranking roles – has maintained an everyman charm and a lively sense of humour. He has commanded the army and the defence force, held the nation’s most powerful mantle as vice-regal representative, earned a knighthood and been made Australian of the Year. Yet he still very much identifies as a bloke from Paddo who rose up in life through a series of extraordinary opportunities.

Through and through, for all the pomp of the Governor-General office, he remains a people’s man. One could argue part of this comes from that uniquely Australian aversion to anything snobbish or aloof. Cosgrove also believes it has a lot to do with his time in the military. While they seem to be a bit of a “closed order” and are skilled in a very specialised discipline, military men and women are just ordinary Australians, he says. “Talk to them and they barrack for Hawthorn, the Roosters, the Broncos. They worry about their mortgage.” They also pay taxes, he says.

“Something that used to bug me when I bumped into people, they’d say: you guys get free housing and you pay no tax! I wish!”

Politicians, who he had to deal with a lot – as their executor of military power and their boss – are yet another class of ordinary Australians. Nobody, it seems, is above or below his regard. As evidenced earlier in the store, it makes him highly approachable.

His sense of humour has also remained intact. It’s why his new memoir is called You Shouldn’t Have Joined…  – it’s the first half of an old military saying. The second line is revealed in the book’s front pages: You shouldn’t have joined if you can’t take a joke.

“I had forty years in the military,” he explains. “I was imbued with the ethos of ‘just get on and do the job, and enjoy every moment of it’.”

This is his second memoir, following the bestselling My Story published in 2006. While the second does cover some of the same decades (“you can’t assume everybody’s read the first’, his publicist told him gently’”), it’s not a rehashing, with different anecdotes, details and insights disclosed. You Shouldn’t Have Joined… devotes chapters to entirely new experiences and matters, too, including one on whether Australia should be a Republic. (Perhaps he hopes it will stop asking him the question – hundreds have badgered him with it over the years.)

“After a lifelong period in the army, I found I had all these yarns to tell,” he says of his first memoir. “It was bursting to get out. After My Story, I really thought that was it. Then a few things happened. I was on a raft of boards. Some of them, like Qantas, had some really interesting stuff happen in the nine years I was on board. Then there was a disaster relief operation, where people in far north Queensland had been smashed by Cyclone Larry. I was asked to take over the recovery coordination.

“The other thing is, I found that the majority of Australians only have a vague idea what the Governor-General does. So there was another story wanting to get out. I thought: Oh well! Here I go again!”

Four hundred pages apiece, both of Cosgrove’s books were written with barely a key tapped his end. Instead, with a little pad of notes beside him as a guide, he’d sit down and spend hours dictating it all out to an attentive speech to text software program.

“I love it,” he says. “It converts your ideas straight onto the screen. It gives the narration a vernacular style, which I think is quite important.”

Being able to engage people through words has been a vital skill in his career in the military and in public office.

“I have a love of language – English was my best subject at school, my best subject when I was studying to be an army officer. Then it became my major tool in commanding people. You have to use language to explain and to mobilise and inspire them.”

I reflected this seems a good case for Humanities funding. Silently, though. A more salient topic awaited. The Brereton Report, which alleges the murder of 39 Afghani citizens by an ADF special operations task force, had just been published. As a senior member of the ex-service community, Cosgrove had already made several public statements on the inquiry, including a spot on 7.30.

“We’re writhing,” says Cosgrove when I broach the subject at last. “People from my background are just so mortified this has apparently occurred. Like all Australians, we are insistent this be investigated to the nth degree, and charges laid where necessary.

“The repeated tours might be a stressor. But nothing should mitigate these gross crimes that have been alleged. We want people to be ferocious in their application of military power. But we don’t want them to cross the line. That is the dilemma, but the absolute requirement.”

He feels a great deal of compassion for the soldiers who served honourably and are dealing with the reputational fallout.

“The men and women in the defence force are very proud. A vast number of them who served overseas in a very difficult environment in Afghanistan have behaved properly. And they feel tainted. Until this is brought to light in a definitive way, if necessary to the courts, everybody’s waiting around in the innuendo and suspicion of ‘are you involved’.”

While Cosgrove officially retired last year in July, now living by the northern end of the Sydney Harbour Bridge, he hasn’t just been watching the news “with mild interest rather than professional need” as he asserts in the book’s introduction. Six months after bowing out of the Queen’s service, he was back serving the community, heading up the Business Council’s bushfire recovery program which helps deliver quick relief to businesses affected by January’s terrible flames.

“I do miss the opportunity to bowl into communities all over Australian and say ‘Hi I’m the Governor-General, how are you going?’ – and then stand around listening for a while,” he admits.

Yet after five years and 4,200 events as Governor-General, Cosgrove is embracing his less demanding lifestyle. It means he can spend more time with his wife Lynne, who he writes adoringly of in his book, and his grandkids. He missed a bit of their growing up when he came out of his first retirement. With his third grandchild just born, he’s looking forward to devoting more of his time to being a granddad – playing, caring and laughing with them. Perhaps reading them Winnie the Pooh.

You Shouldn’t Have Joined by Sir General Peter Cosgrove was published in November 2020 by Allen & Unwin. Signed copies are available at Roaring Stories.

The former Labor politician and author talks on his new book ‘What Is To Be Done: Political Engagement and Saving the Planet’.