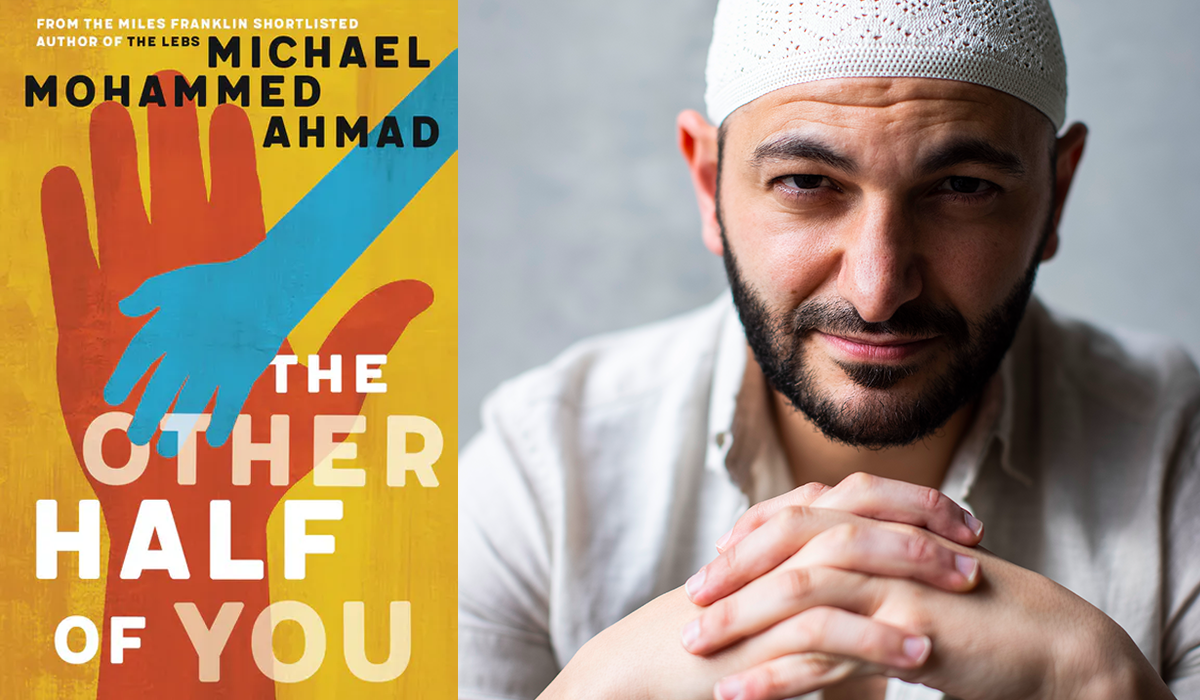 In any comprehensive discussion on contemporary Australian literature, the name Michael Mohammed Ahmad cannot be overlooked. In 2019, Ahmad was shortlisted for the Miles Franklin award for his novel, The Lebs – the second in an semi-autobiographical trilogy on growing up Lebanese Muslim in one of Australia’s most ethnically and culturally diverse regions in an increasingly hostile post-9/11 landscape. He is the founding director of Sweatshop, a movement dedicated towards empowering CALD Western Sydney writers, which includes the authors Evelyn Araluen, Maryam Azam and Annie Zhang. This year, Sweatshop co-published and Ahmad edited After Australia, a speculative fiction anthology in which twelve Indigenous writers and writers of colour imagine what living in this nation in 2050 could look like.

In May, Ahmad’s final book in the ‘House of Adam’ trilogy was published. The Other Half of You finds protagonist Bani Adam as a new father addressing his son, Khalil, a child of an interfaith marriage, and telling him the story of how his existence was not only possible, but destined. Bani’s journey towards the birth of his son is a monumental crucible, however – a battering of both visceral and physic violence, of self-sabotage and ugly prejudice, an incredible tearing of self-will against systems, traditions, assumptions and hypocrisies. Vibrating with Ahmad’s unapologetic voice, by turns gentle and searing in its rendered images and implications, the book is always piercingly wry and alive to the lived realities of ‘multiculturalism’ for non-white families, and the messy frailty of man. Reading the first two books of the trilogy is not necessary to The Other Half of You, but recommended.

We talked with Ahmad about the book and his writing.

The Other Half of You is a story which grapples with how different faiths and cultures see themselves, and each other, and how the stakes of what is important to identity can sometimes be misplaced and harmful. Talk to me a little about these tensions, hypocrisies and stereotypes as you represent them in modern-day Australia, particularly as they relate to Lebanese Muslims.

I studied at Punchbowl Boys High School between the years 1998 and 2004. Though it was a public school, ninety-five percent of the student body identified as Arab and Muslim. During this time, Punchbowl Boys was surrounded by barbed wires and cameras and was regularly appearing on the front pages of newspapers in relation to gangs, drive-bys, drug dealings, sexual assaults and terrorist conspiracies. Too often, I witnessed young men in my school and our broader community committing violent crimes against each other, including shootings and stabbings, and against young women, including sexually predatory behaviour. In the aftermath of the 2000 Skaf Gang Rapes, the 2001 September 11 attacks on New York City, and the 2005 Cronulla Riots, my ‘Leb’ friends and I were routinely harassed by journalists, police officers, politicians and everyday members of the White Australian public.

It has been my life’s work as a writer, editor and community arts worker to try and understand how and why the young men and women of my generation found themselves in such a toxic environment, and to empower the next generation to do better. Sometimes it feels like my efforts have been a complete waste of time, but every morning, while I am walking my son to school, we both stop, close our eyes, and feel the winter sun of the western suburbs on our faces, and I think to myself: There’s nowhere else in this world I’d rather raise my child.

Though it contains a great deal of suffering of all kinds, The Other Half of You is a very optimistic book, in which there are no monsters, just flawed humans doing their best from what they know. Even the ugliest character, the racist white uncle, is more pitiable and pathetic than an object of hate. What’s behind this approach to character?

The name of my protagonist, who you might call my ‘autobiographical alter ego’, is named Bani Adam. However, in Arabic, this isn’t really a person’s name, rather it is a concept: ‘Bani Adam’ literally translates to ‘Child of Adam’, and it is how Arabs generally refer to humankind.

As a creative writer, I always do my best to find the humanity in each of my characters, attempting to portray them as complex and three dimensional – flawed and tragic and hilarious and beautiful and ignorant and wise all at once.

This book completes a trilogy in which we follow Bani from a young boy to a father – The Tribe and the Miles Franklin finalist The Lebs being the prequels. Did you always have a good idea of how the series arc would form? Does it really end here, or could there be more books to come from this world you have brought to literature?

I had no idea how the arc would play out because my life literally had to happen in order for me to write these books. I remember the night my son was born – his mother was asleep in her hospital bed while I sat in the darkness in front of her. I had Kahlil in my right arm while I began writing the very first scenes of The Other Half of You on my phone in my left hand.

As for the question of whether it ends here: Well, let’s just wait and see what happens in my life next before I give a definitive answer…

How did you develop the voice of your narrator Bani Adam, and has his voice evolved over the course of the trilogy? What were some of the decisions you had to think about when it came to representing his speech and thoughts on the page?

Thank you for asking this question – one of the most painful and exhausting aspects of being a professional writer is helping people understand that what we do is a skill and a craft that takes decades of research, training and education to master, which is completely separate from having a compelling story to tell.

Rather than tooting my own horn, I think it’s always best to let the literary critics examine what I am trying to do and if it has any value, but I will share one aspect about writing this book that was new for me: While The Other Half of You continues the first-person narration of Bani Adam that you’ll find in The Tribe and The Lebs, this is the first time in my writing that I also activate the second-person perspective, the ‘you’, because throughout the entire novel Bani is directly addressing his son, Kahlil.

I knew this was a risky path to take – in my opinion, there are very few books out there that successfully pull off the second-person perspective. The most common examples of second-person novels are those terrible ‘Choose Your Own Adventure’ Goosebumps books. And I’m no R. L. Stine!

While you’ve described your novels as autobiographical fiction, Bani’s voice and identity is of course separate to yours. How did you come into your own literary voice?

Through a combination of ten years studying at university and thirty-five years living among wogs, thousands of crazy wogs.

The book is addressed to Bani’s son, Kahlil, named after the Lebanese writer and poet Kahlil Gibran. Your own son I believe is named Kahlil. Two part question: why did you choose this form of narration, and why did you decide that Bani’s and your son would share the name?

Because I can deal with every aspect of my life being called ‘fiction’ except for one: My Kahlil.

There is a scene in the book in which the father of Bani’s white girlfriend says something about making sure his daughter isn’t the only one making sacrifices for his culture. And he hits back with, “do you want to ask that question again in my language”? The obliviousness of white privilege is a devastating and derisive refrain throughout the book. Do you think the white Australian imagination of ‘Lebs’ has changed since you published The Tribe?

MMA: I don’t ever see any point in attacking White people, or anyone else for that matter, for their ignorance, prejudice and obliviousness (I’m not on social media and have no interest in ‘cancel culture’). Instead, I have always attempted to tell stories that invite and welcome Black, Brown and White Australians into the mind and the soul of my community – to show my reader the world through different eyes.

It’s very hard to know if the White imagination of ‘Lebs’ has changed in Australia since I published The Tribe, but what I will say is that our best chance for any kind of redemptive change in Australia and around the world always begins with literature.

If you want to know us, read us!

Who are some of the CALD writers who have published books recently that you’d recommend?

For every half-decent Arab-Muslim man on this earth, there are ten incredible Arab-Muslim women. Three of them have books out this year which should be required reading for all Australians: Coming of Age in the War on Terror by Randa Abdel-Fattah, Muddy People by Sara El Sayed, and The Mother Wound by Amani Haydar.

The Other Half of You by Michael Mohammed Ahmad was published in May 2021 by Hachette, and is available now at Roaring Stories Bookshop Balmain.

Getting in sync with the wilder world: Q&A with Claire Dunn

Ahead of our July 19 author event with Dunn, we asked the eco-activist a few questions about her new book.