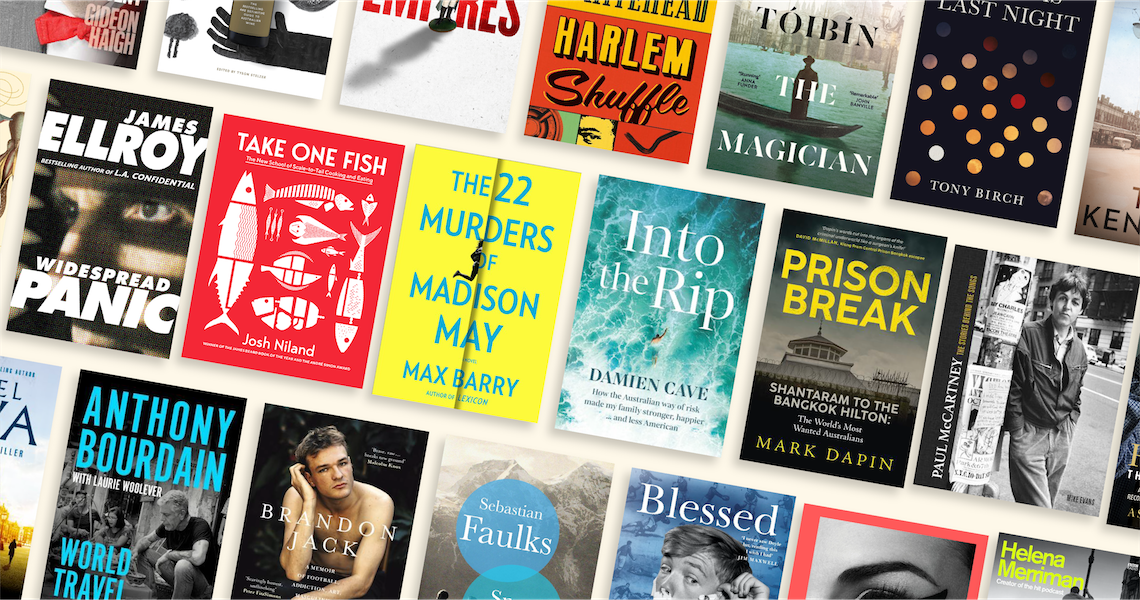 Our top picks for Father’s Day

There are a lot of dads who probably need a big show of love and appreciation right now – and a good book can be a great gift. For Father’s Day (that’s next Sunday, September 5!), we’ve curated a list of books we reckon dads will enjoy – from crime fiction, to memoir, to wine guides and more.

To order these or more books, puzzles, journals or other items from our store, phone us or email us, and we can sort you out with curbside collection or home delivery. Ask us about our free gift wrapping, too! Typically, for this service we’d ask for a gold coin donation to the Indigenous Literacy Foundation. Since you can’t physically drop a coin in the jar at the moment, you can choose to donate to the ILF directly through this link, or by donating in-store when we see you next.

Harlem Shuffle by Colson Whitehead | $32.99 (in stock 1 September)
A family saga masquerading as a crime novel, a hilarious morality play, a social novel about race and power, and ultimately a love letter to 1960s Harlem.

The Magician by Colm Toibin | $32.99 (in stock 31 August)
A masterful and imaginative dramatisation of the public and private life of the author Thomas Mann during the Great War. ‘Mann himself, one feels certain, would approve.’ – John Banville

Dark as Last Night by Tony Birch | $29.99
A powerful short story collection from a great Australian writer, where we witness two teenagers clumsily getting to know one another by way of a shared love of music, and a man mourning the death of his younger brother, while beset by memories and regrets from their shared past, and tales of human connection.

Empires by Nick Earls | $32.99 (In store 31 August)
A masterful novel in five parts with boys and men at its heart. Spanning centuries and crossing continents, it explores the empires we build, the way we see ourselves, the narratives we construct and the interconnectedness of all things. This is Nick Earls at his finest.

Corporal Hitler’s Pistol by Tom Keneally | $32.99
How did Corporal Hitler’s Luger from the First World War end up being the weapon that killed an IRA turncoat in Kempsey, New South Wales, in 1933? Rural communities have always been a melting pot and many are happy to accept a diverse bunch … as long as they don’t overstep. Set in a town he knows very well, in this novel Tom Keneally tells a compelling story of the interactions and relationships between black and white Australians in early twentieth-century Australia.

Snow Country by Sebastian Faulks | $32.99
1914: Young Anton Heideck has arrived in Vienna, eager to make his name as a journalist. While working part-time as a private tutor, he encounters Delphine, a woman who mixes startling candour with deep reserve. Entranced by the light of first love, Anton feels himself blessed. Until his country declares war on hers. An epic new love story from master storyteller Sebastian Faulks, spanning the lives of many.

The 22 Murders of Madison May by Max Barry | $32.99
From the critically acclaimed author of Jennifer Government and Lexicon comes a mind-bending speculative psychological suspense about a serial killer pursuing his victim across time and space, and the woman who is determined to stop him, even if it upends her own reality.

Widespread Panic by James Ellroy | $32.99
From The Modern Master of Noir comes a novel about the malevolent monarch of the 1950s Hollywood underground – a tale of pervasive paranoia teeming with communist conspiracies, FBI finks, celebrity smut films and strange bedfellows.

The Enemy Within by Tim Ayliffe | $32.99
Someone wants to stop Bailey doing what he does best – exposing the truth. He has been investigating the rise of a global white supremacist group and suspects that a notorious neo-Nazi in the United States has been directing deadly racist attacks on Sydney’s streets. When the body of one of his key sources washes up on a nearby beach, it’s clear Bailey and anyone helping him have become targets. Bailey reaches out to a ruthless old friend – CIA veteran, Ronnie Johnson – to lure the enemy from the shadows.

Sweet Jimmy by Bryan Brown | $29.99 (in stock 31 August)
Taut and crackling with character, these gritty, raw and sometimes very funny stories from Australian great Bryan Brown are Aussie Noir at its best. ‘My friend Bryan Brown, quite apart from his other manifold talents, turns out to be an excellent writer. An authentic voice; highly imaginative yet completely believable, with a flair for fully realised characters and a gripping narrative … a great story teller. This is utterly baffling. I’m furious.’ – Sam Neill

Blessed: The Breakout Year of Rampaging Roy Slaven by John Doyle | $32.99
Who is Rampaging Roy Slaven? An Australian icon, a raconteur, an athlete of unsurpassable – and some may say improbable – sporting feats. John Doyle, the man who knows him best, delves into the early years of the master of midfield mayhem.

28 by Brandon Jack | $29.99
Continually told he was born with footballing blood, Brandon Jack has spent his life uncertain of the relationship he holds with the games he’s played. Now a writer and musician, he sits in his apartment and reflects upon the years spent pursuing what felt like an inevitability – the footballing life.

Neil Harvey: The Last Invincible by Ashley Mallett | $39.99
The first major biography of Australian cricketer Neil Harvey, the last living member of Donald Bradman’s 1948 Invincibles. Mallett draws not only on Harvey’s own recollections but those of Australian and international cricketers, commentators and officials to bring to life his remarkable story.

Into the Rip by Damien Cave | $32.99
When Damien Cave brought his young family to Sydney to set up the New York Times’ Australian Bureau, they encountered the local pursuits of Nippers and surfing – and a completely different approach to risk that changed the way they lived their lives.

Tongerlongeter: First Nations Leader and Tasmanian War Hero by Henry Reynolds, Nicholas Clements | $34.99
Australia has no war hero more impressive than Tongerlongeter. Leader of the Oyster Bay nation of south-east Tasmania in the 1820s and ’30s, he and his allies led the most effective frontier resistance ever mounted on Australian soil. An epic story of resistance, suffering and survival. Tongerlongeter resurrects a once-in-a-generation leader all Australians can admire.

The Brilliant Boy: Doc Evatt and the Great Australian Dissent by Gideon Haigh | $34.99
A feat of remarkable historical perception, deep research and masterful storytelling, The Brilliant Boy confirms Gideon Haigh as one of our finest writers of non-fiction. It shows Australia in a rare light, as a genuinely clever country prepared to contest big ideas and face the future confidently.

THE ART OF ENJOYING LIFE

Take One Fish by Josh Niland | $55.00
There are no rules when it comes to cooking fish according to James Beard award winning chef Josh Niland, only an endless world of possibilities. With 60 mind-blowing recipes from just 15 global varieties of fish, this cookbook will take you on a gustatory journey – from elaborate to easy, small to large and – always – scale to tail.

Recipe for a Kinder Life by Annie Smithers | $32.99
Annie Smithers shares a private masterclass on her practical and philosophical approach to sustainable living and wellness. ‘This is a deeply honest and personal story of a love of the land and food. Annie takes us, warts and all, on her sustainable journey of cultivation and cooking. Her respect for the land is evident by the barrowload.’ – Paul Bangay OAM

Halliday Wine Companion 2022 by James Halliday | $39.99
the go-to guide for wine ratings, regions, best varietals, winery reviews and a curated selection of the best wines in Australia. The 2022 edition has been completely revised to bring readers up-to-the-minute information.

Paul McCartney by Mike Evans | $49.99
Taking 50 key songs from his five-decade career, each includes full session details, personnel lists and chart data and is described in detail, from original inspiration to the final release. Quotes from session musicians and studio personnel – and star guests such as Stevie Wonder, Elvis Costello and Kanye West – bring the making of every song to life, alongside a wealth of related photographs in and out of the studio.

The Listening Party: Artists, Bands And Fans Reflect On 100 Favourite Albums by Tim Burgess | $49.99
Relive 100 of the most memorable listening parties here with stories from bands and fans, rarely seen backstage images, and unique insider info from those who created these iconic albums.

Amy Winehouse: Beyond Black by Naomi Parry | $60.00
Ten years after her untimely death, this affectionate and evocative visual celebration tells the definitive story of the life and career of Amy Winehouse.

Two Afternoons in the Kabul Stadium by Tim Bonyhady | $34.99
From photographs of unveiled women to an image of horror—the execution of a kneeling woman known as Zarmeena, videoed covertly by one of the few watching women. This remarkable book provides a history of Afghanistan through the visual.

Tunnel 29 by Helena Merriman | $34.99
He’s just escaped from one of the world’s most brutal regimes. Now, he decides to tunnel back in. It’s summer, 1962, and Joachim Rudolph, a student, is digging a tunnel under the Berlin Wall. Waiting on the other side in East Berlin – dozens of men, women and children; all willing to risk everything to escape. The true story of the most remarkable escape tunnel under the Berlin Wall.

Prison Break by Mark Dapin | $32.99
With unprecedented access to ex-prisoners, prison officers and police, as well as ASIO files and witnesses, Mark Dapin brings to life a hidden criminal world of prison brutality, courage and legend. Prison Break tells the real story behind Australia’s most audacious prison escapes and proves that sometimes the truth is even more compelling than the myth.

World Travel: An Irreverent Guide by Anthony Bourdain, Laurie Woolever | $29.99
A guide to some of the world’s most fascinating places, as seen and experienced by writer, television host, and relentlessly curious traveler Anthony Bourdain. For veteran travelers, armchair enthusiasts, and those in between.

Worlds in Shadow: Submerged Lands in Science, Memory and Myth by Patrick Nunn | $29.99
The traces of much of human history – and that which preceded it – lie beneath the ocean surface; broken up, dispersed, often buried and always mysterious. Nunn sifts the facts from the fiction, using the most up-to-date research to work out which submerged places may have actually existed versus those that probably only exist in myth.

Sentient by Jackie Higgins | $34.99
Sentient assembles a menagerie of creatures – from land, air, sea and all four corners of the globe – to understand what it means to be human. Through their eyes, ears, skins, tongues and noses, the furred, finned and feathered reveal how we sense and make sense of the world, as well as the untold scientific revolution stirring in the field of human perception.