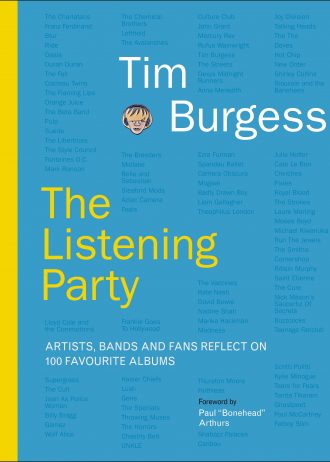 The Charlatans’ Tim Burgess invites you to the greatest listening party of all time.
In 2020 when the world was forced to hit pause on live in-person gigs, Tim Burgess found an ingenious way to bring people together by inviting artists and bands, from Paul McCartney and New Order to Michael Kiwanuka and Kylie, to host real-time album playbacks via Twitter.
Relive 100 of the most memorable listening parties here with stories from bands and fans, rarely seen backstage images,
and unique insider info from those who created these iconic albums.
“Hey Twitter, let’s all say a big thanks to Tim for these brilliant events this year! We really needed them. So much great music being talked about.'” – Sir Paul McCartney
Contact us to order 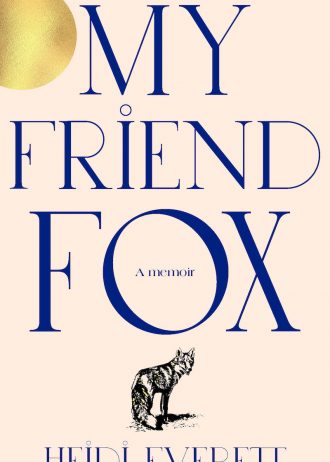 The fox sits on the outer waiting for me to discover him because at the moment, I am on the outer too. He watches me. Can you see him? He’s clever at hiding.
Just like fox, Heidi has lived on the outer. The ‘official record’ of her life has been her mental health record: Primary diagnosis – Schizoaffective; Comorbidity – Major depression, juvenile autism, and not her own memories. This is the living, breathing version of Heidi’s mental health file that psych wards, doctors, mental health staff or rehab workers know little about or worse, use as evidence of diagnoses. This is Heidi’s account of what happened, shadowed by the story of a fox who knows he’ll never belong.

Part parable, part memoir, My Friend Fox is a story that might be familiar to some – searching everywhere to finally feel at home. With fox as her guide, Heidi comes to know how to live authentically, and venture into a future of her own making.
Alongside Heidi’s beautifully lyrical words are her exquisite line drawings, making My Friend Fox a book to be read, treasured, and gifted.
Contact us to order 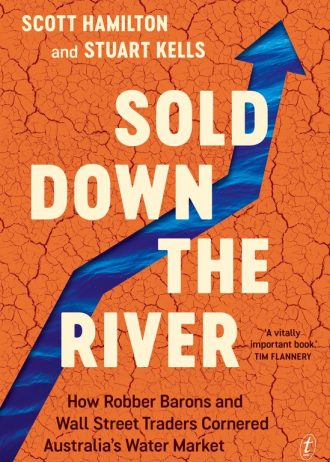 Sold Down the River

The Murray–Darling Basin is Australia’s greatest environmental asset. The story of water in Australia is written into its ancient rivers, creeks and wetlands. It’s home to more than forty Indigenous nations, and it covers an area bigger than France. It is the beating heart of our regions and sustains 40 per cent of our food production.
In 2012 Australia signed up to the Murray–Darling Basin Plan, a scheme designed to create a market for the Basin’s water and to safeguard the environment.
But the Plan has gone horribly wrong. It has sold our farmers and rural communities down the river. It has contributed to appalling environmental damage on the planet’s driest inhabited continent. It has allowed a ruthless market to form, exploited by traders who buy and sell water as if it were a currency like Bitcoin.
Scott Hamilton and Stuart Kells, both experts in public policy, have interviewed irrigators, farmers, Traditional Custodians and water traders to tell this disastrous story. In doing so, they bring to light how we have failed to protect our most precious natural resource.
You can’t understand Australia without understanding water. Sold Down the River is compulsory reading for all of us.
Contact us to order 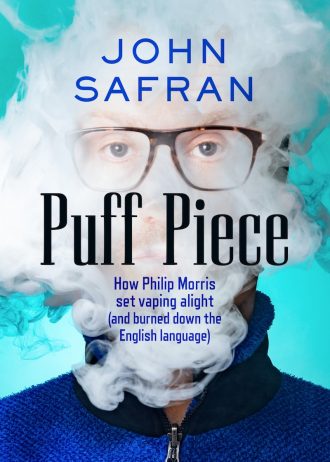 The folks that bring you Marlboro – Philip Morris – are wheezing, slowly dying. Cigarettes are out of favour with everyone, from world governments and investors to, increasingly, smokers. So, what’s their plan?
Prepare to be dazzled. Or, at the very least, befuddled.
Philip Morris has announced they will shut down as a cigarette company, and relaunch as a health enterprise, dedicated to convincing the one billion smokers of the world to quit.
The ever-curious John Safran leaves his apartment to find out what on God’s green earth is going on. As he starts digging away he discovers a company up to brand new shenanigans, wangling their way into unexpected places, desperately trying to keep their tobacco business alive by brandishing a mysterious new doohickey called an IQOS.v
And not only that, now they’re upending language itself, changing the meaning of words. Will they slip past bans by convincing governments they don’t sell ‘cigarettes’ but rather ‘HeatSticks’, and that these don’t emit ‘smoke’ but ‘aerosol’? Can John get the real story out of them without his life catching fire?
Wild, hilarious and thought-provoking, Puff Piece is a probing look into Big Tobacco and the vaping industry, and how words can be literally a matter of life and death.
Contact us to order 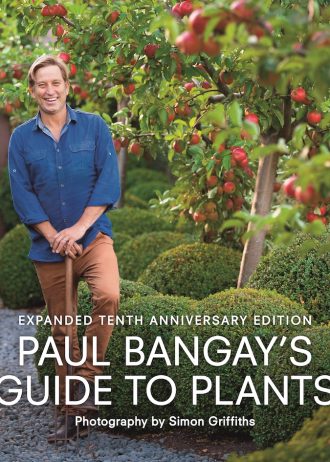 Paul Bangay’s practical and bestselling guide to plants, now expanded and updated for its tenth anniversary
Gardens designed by Paul Bangay are renowned for their elegant proportions, careful use of materials and inspired choice of plants. In one garden, precise box hedging will frame billowing beds of perennials; while in another, olive trees emerge from an undergrowth of rosemary against a dramatic coastal landscape. In a Paul Bangay garden, you can be sure that every plant has been carefully selected to achieve a particular purpose at a specific site.
This comprehensive and informative guide is the perfect companion to Paul Bangay’s Garden Design Handbook, which revealed Paul’s insights into successful garden design and construction, and answers the question: what do I plant and where? Rich with anecdotes about what has worked best over the years, and with a special focus on plants for our changing climate, the collection showcases Paul’s A-list plants with photography from the best in the business, Simon Griffiths.
Whether you’re creating a garden for an inner-city courtyard or a rambling rural estate, this book contains the practical advice readers need to give their own patch of green the Paul Bangay look. 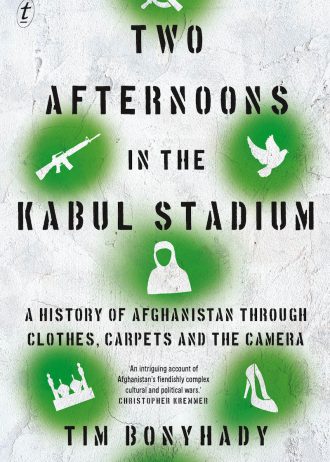 Two Afternoons in the Kabul Stadium

From the complete coverage of chadaris to mini-skirts, and back again. From ancient carpet designs to woven depictions of tanks and Kalashnikovs. From photographs of unveiled women to an image of horror—the execution of a kneeling woman known as Zarmeena, videoed covertly by one of the few watching women. This remarkable book provides a history of Afghanistan through the visual.
The Kabul Stadium looms large because it was there, one afternoon in August 1959, that women first appeared in western dress at a celebration of Afghanistan’s independence—a turning point, not only for women in Afghanistan’s cities but also for the country itself, symbolising its embrace of the modern. It was also there, one afternoon in November 1999, that the Taliban killed Zarmeena.
Two Afternoons in the Kabul Stadium offers both a new way of seeing Afghanistan and a new way of understanding it.
Tim Bonyhady’s books include the award-winning Good Living Street, The Colonial Earth and The Enchantment of the Long-haired Rat. He has curated two landmark exhibitions of Afghan war rugs. 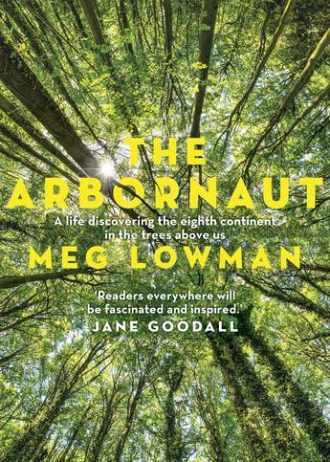 Nicknamed the ‘Real-Life Lorax’ by National Geographic, the botanist and conservationist Meg Lowman takes us on an adventure into the eighth continent of the world’s treetops, along her journey as a scientist, and into climate action.
One of the world’s first tree-top scientists, Meg Lowman is as innovative as MacGuyver and as can-do as the Unsinkable Molly Brown. A pioneer in her field?she invented one of the first treetop walkways?she is a tireless advocate for the earth and has spent decades educating citizens across the globe. In a voice as infectious in its enthusiasm as in its practical optimism, The Arbornaut chronicles her irresistible story.
From climbing solo hundreds of feet into Australia’s rainforests to measuring tree growth in the northeastern United States, from searching the redwoods of the Pacific coast for new life to studying leaf-eaters in Scotland’s Highlands, from a bioblitz in Malaysia to conservation planning in India to collaborating with priests in Ethiopia’s last forests?Lowman launches us into the life and work of a field scientist and ecologist. She also offers hope, specific plans, and recommendations for action; despite devastation across the world, we can still make an immediate and lasting impact against climate change. A blend of memoir and fieldwork, The Arbornaut is for fans of Hope Jahren’s Lab Girl and the work of E. O. Wilson, Jane Goodall, Robert MacFarlane, and Helen MacDonald.
Come live among scientists and travel the world (even in a hot-air balloon)! The Arbornaut is the engrossing story of how a nerdy tree climber and the only girl at the science fair grew into an inspiring innovator and international leader. 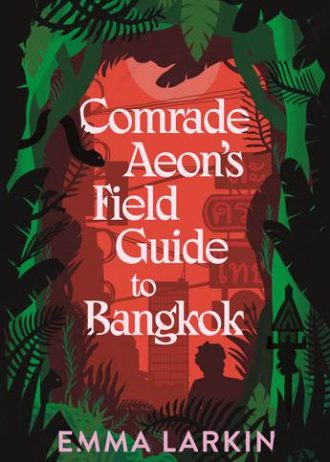 The secrets hidden in an overgrown plot of land in the centre of Bangkok reveal the politics, society and culture of contemporary Thailand; in an authentic and luminous debut novel for readers of Jennifer Egan and Jonathan Coe.
In Bangkok, a plot of land behind a city slum resonates with the hopes, dreams and fears of the local community. For Comrade Aeon, a homeless insurgent who fled to the jungle after a military crackdown on student protestors in 1976, it’s a verdant refuge and the place from which he documents the underbelly of the city. For Ida Barnes, an ex-pat whose husband may be cheating on her, it’s an inviting retreat. For Witty, an urbane property developer married to one of the city’s most famous movie stars, it’s a ‘Bangkok Unicorn’ – that rare chance to make his mark on the Bangkok skyline. But the slum-dwelling spirits who guard its secrets know that it holds a much darker history, that it masks the silent politics at the heart of Thai culture.
Written with a tender compassion for Bangkok’s people and customs, Comrade Aeon’s Field Guide to Bangkok is a masterful, propulsive debut which introduces a fresh new talent in fiction. 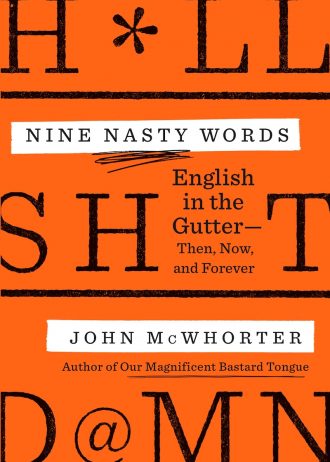 One of the preeminent linguists of our time examines the realms of language that are considered shocking and taboo in order to understand what imbues curse words with such power–and why we love them so much.
Profanity has always been a deliciously vibrant part of our lexicon, an integral part of being human. In fact, our ability to curse comes from a different part of the brain than other parts of speech–the urgency with which we say “f&*k!” is instead related to the instinct that tells us to flee from danger.
Language evolves with time, and so does what we consider profane or unspeakable. Nine Nasty Words is a rollicking examination of profanity, explored from every angle: historical, sociological, political, linguistic. In a particularly coarse moment, when the public discourse is shaped in part by once-shocking words, nothing could be timelier.