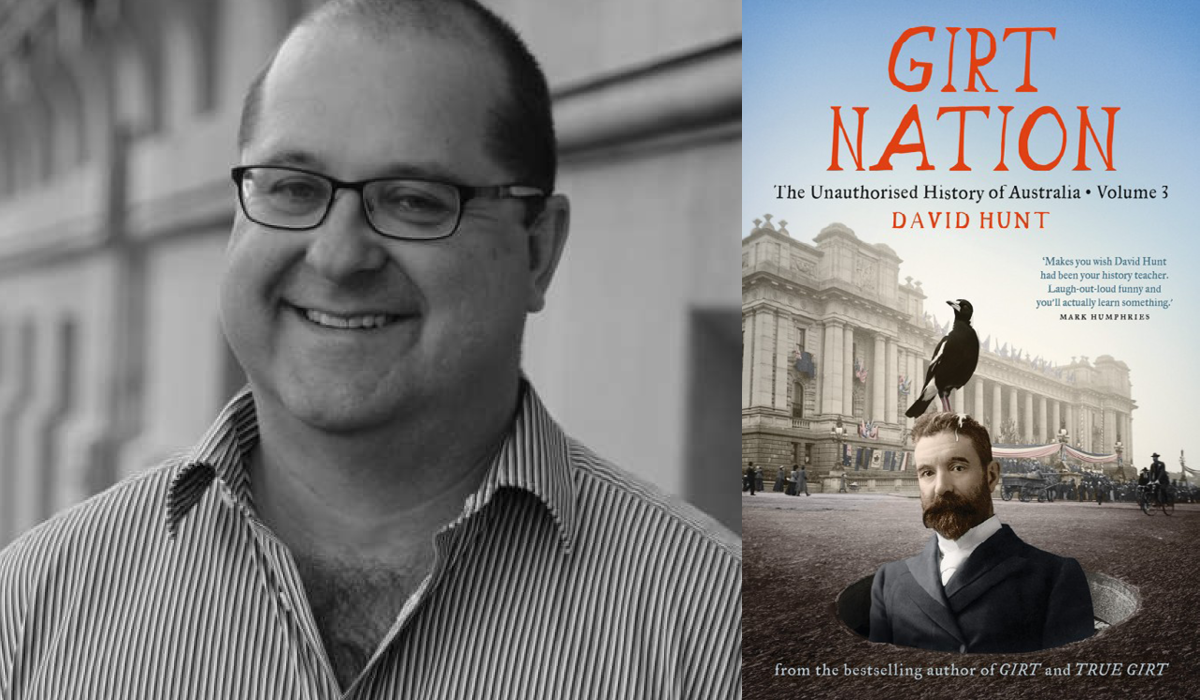 Nobody romps with quite as much twinkly-eyed mischief through Australian history as David Hunt. Pricking the hyper-inflated dignity of long-dead politicians, scorching the grand narratives that overwhelmingly make it seem that nobody but white men ever existed, and displaying with abundant generosity, wit and fascination the coincidences, cruelties and melee of characters that shaped our past, Hunt is the history teacher you might have actually looked forward to having class with.

Following the success of his bestsellers Girt and Girt Nation, the historian, satirist and author has this month published the third volume in the series, Girt Nation. In it, we learn about Alfred Deakin’s fascination with ectoplasm, self-combusting ballerinas, fiery feminists, goat testicle injections, Jandamarra’s uprising against colonisation, and the unexpected jihadist writings of a younger Banjo Paterson. Even more fascinating asides are tumbled into footnotes, which happily thumb their noses at propriety on almost every page.

Before his visit to our store for a book signing, we spoke with Hunt about the Girt trilogy.

This is the third instalment in the ‘Girt’ books, and it is as cheerily subversive and deliciously entertaining as the last two. Of all the things that you could have expertly flung your satirical spear at, why Australian history?

I am an accidental historian. Girt has its origins in a sketch comedy show about Australian history that I worked on with Charles Firth of The Chaser. Thankfully, it never went into production, because it soon became apparent to me that the real history of Australia was funny and dark at the same time, and that a sketch approach would only divert attention from the amazing truths of our past.

French philosopher and lexicographer Pierre Bayle wrote in 1697, ‘If an historian were to relate truthfully all the crimes, weaknesses and disorders of mankind, his readers would take his work for satire rather than history’ (except he wrote it in French). Bayle was spot on, and the Girt books wallow in the crimes, weaknesses and disorders of humanity, which Australia has enjoyed in abundance.

What was your own experience learning history in the classroom as a kid?

I was a sword and sandals student. I was up for anything with a toga or well-oiled Persian beard. I remember little of Australian history at school – there were convicts, sheep, rum, sheep, explorers leaving little dotted lines on maps, sheep, gold, some black people who were insufficiently into sheep to waste much time on, not many women (ewes don’t count), and sheep. I also made a replica of the Endeavour out of an egg carton, paddle pop sticks, cotton and paper – I liked that bit. Australian history is much better taught today.

Who, out of all the colourful individuals that you feature in the book did you find most fascinating?

In researching Girt Nation, the two characters who impressed me the most were Catherine Helen Spence and Alfred Deakin.

Spence was Australia’s first female journalist and the first woman to set a novel in Australia; a leading suffragist; the first Australian woman to seek election to public office; a towering intellect who gave Australians foster care, equal education for girls (if they were bright and lived in Adelaide), proportional representation, and superannuation; a futuristic novelist who promoted sexual equality, premarital sex, coeducational schooling, ‘easy divorce’, republicanism and, less attractively, euthanasing ‘idiot children’ at birth, and immigration restrictions to prevent ‘Chinese coming to destroy all we have struggled for!’

Alfred Deakin, the central character in Girt Nation, was the most effective and principled advocate of Australian Federation, although he did not let his personal admiration for the Asian races prevent him from championing White Australia and using racism to foster nationalism.  More than any other person, he shaped the institutions and principles that underpin our modern Australian democracy. He was a radical reformer who was riddled with self-doubt and Australia’s greatest Liberal prime minister and necromancer.  He was a prime mover, shaker and rapper on the Australian spiritualist scene, and the advice he took from the dead undoubtedly made Australia a better place for the living.

I imagine there must be a small mountain of things that you found out in your research that you couldn’t include in the book due to considerations of space. What is one of the juiciest morsels that you had to leave out?

I have a policy of never discarding a juicy morsel. If I have left any morsels out of my books, my readers may be assured that they were entirely juiceless. Who knew the ceremonial mace used to open the Victorian parliament was employed as a sex toy by some of the colony’s more enterprising politicians? Or that Banjo Paterson’s first poem was a call to jihad against New South Wales’ troops in Sudan (written under a pen name borrowed from the world’s most notorious hardcore Islamist cleric)? Or that in 1971, the year of my birth, Aboriginal students could be excluded from New South Wales schools if the parents of other students objected to their presence?

How would you characterise Australia’s relationship to its history? (Particularly White Australia’s.)

Comfortable or conflicted, depending on your taste in armband.

In 1996, then prime minister John Howard told us we should feel ‘comfortable and relaxed about our past, as the balance sheet of our history is one of heroic achievement’. Australians have had more than their fair share of heroic achievement, but this ‘Bex, a cuppa and a good lie down’ approach to Australian history was designed to gloss over the catastrophic impact colonisation had on First Nation peoples.

Federal education minister Alan Tudge is a card-carrying member of the Bing Crosby school of Australian history. In his desire to ‘accentuate the positive, eliminate the negative’ in the teaching of our past, he convincingly demonstrates that he has no idea of what education or history are actually about. The idea that history should be ‘authorised’ by politicians is anathema to me, which is why the Girt series is subtitled The Unauthorised History of Australia.

I seek to tell uncomfortable inconvenient truths. Girt Nation explores the mis(treatment) of Aboriginal and Torres Strait Islander peoples, Pacific Islander labourers, and ‘coloured’ people generally. At the turn of the century, White Australia was a given and there were very few dissenters (most of them were parked in reserves or missions, offshore processed to islands off the Queensland coast, or sent back to where they came from). There are also two chapters of the book devoted to the story of women’s rights – an area in which Australia, in spite of strong internal and external opposition, truly led the world in the later nineteenth century.

I take a utilitarian approach to history. Like Cicero, I believe that history ‘provides guidance in daily life’. It’s difficult to avoid the mistakes of the past if you know nothing of them.

You are evidently a huge fan of footnotes. What are the freedoms and pleasures of a footnote?

I am a member of the Terry Pratchett school of footnoting. In Girt, I sought to satirise academic histories, noted for their dry footnotes, by filling my footnotes with asides, diversions, shamelessly biased commentary, and stories about the origins of particular words or phrases. My rule with footnotes is that the facts in them have to be true, or that it needs to be clear that they are the opinion of the author. It also helps if they are funny and many of the best bits of the Girt books can be found in the footnotes. Girt Nation contains my longest footnote to date, a 451-word wokeist treatise on Thomas the Tank Engine. It also introduces the reader to Carl von Ledebur, the nineteenth century sports cheat and Essendon Football Club trainer who injected people with crushed dog, goat and guinea pig testicles – I love how the footnotes enable me to connect the past with the recent present.

Are there more Girt books in the works that us readers can expect?

I have a second and less successful literary career as a children’s picture book writer, and I’d like to try to become more successful at them next. I’m then going to try my hand at (non-historical) crime fiction because I enjoy the genre and want to test my ability to write in a different style. I’ll then think about another history – perhaps Girt World War, as my publisher doesn’t like Girt 4: The Girtening. There’s no accounting for taste.

Girt Nation by David Hunt was published in November 2021 by Black Inc Books. Find a copy in store at Roaring Stories Bookshop Balmain.