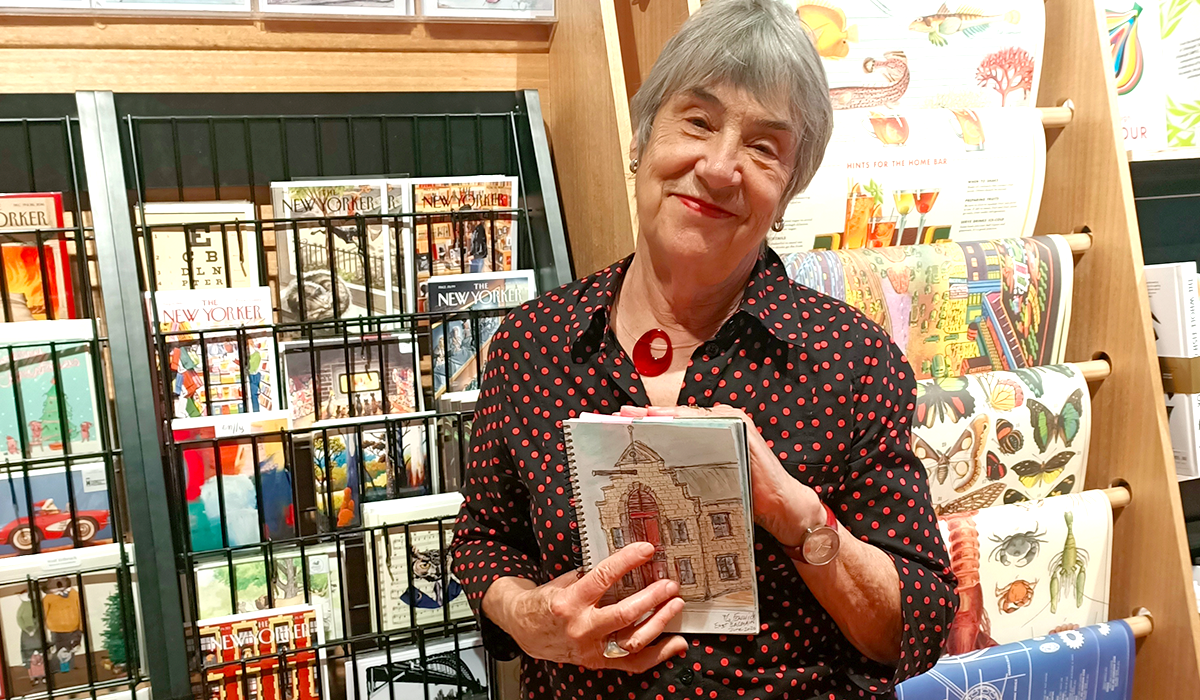 As the realities of the virus set in early last year, and the agency of individuals became ever more circumscribed, the restless Jan Larsen knew that she would have to find a new way to fill her time. A Perth-born woman who has lived in Denmark, Denver, the UK and now Sydney, even in retirement she is not one to sit idle. In the last few years, she has been leading tourists and inquisitive locals around historic tall ship the James Craig and conducting other guided tours on the Harbour as a Sydney Heritage Fleet volunteer. The pandemic soon suspended this activity too.

Yet as any creative will know, it takes but a little imagination to transform a constraint into an opportunity. Refocus your perspective, and suddenly a garden, a room, a street becomes a whole world – the familiar transformed into the exciting unknown, rich in the overlooked and under-observed.

Perhaps you saw her? Jan, perched on a bench or low wall with her small sketchbook, pens and watercolours, somewhere in Ballast Point Park, by the Snail’s Bay Jetty, or opposite the old sandstone terraces along Grove Street. So long as the weather permitted, she would be out every week, discovering anew through colour and line the neighbourhood she has lived in for over 20 years. Building upon the preliminary sketches or photographs in her small upstairs studio – sometimes in watercolour, sometimes acrylic – Jan soon found herself with dozens upon dozens of character-rich vignettes of the inner west peninsula – its chimneys, rooftops, waterways, storefronts and houses.

It was her husband’s niece in Denmark, herself a jewellery artist, who suggested that Jan give her art a more public existence. Today, eight of Jan’s paintings have been given new life as greeting cards, sitting on display at Roaring Stories Bookshop.

“I have been a long-term customer of Roaring Stories and like their collection of cards and the atmosphere of a bookshop as opposed to, say, a newsagent,” says Jan. “I came in and showed some of my images to [owner] Daniel Jordon and he was very encouraging … My neighbour’s daughter, Genevieve French, agreed to help me get them ready for the printer.”

Four of the greeting cards are landscapes in watercolour. Four are rooftop views of chimneys in acrylic. Of the latter series, one is the view from Jan’s own second-storey window.

Though you wouldn’t know it, art is for Jan a childhood passion only reignited in her retirement.

“I’ve loved art since I was very young, in preschool,” she tells me, sitting in the bookstore’s back office. “My best friend’s mother was an artist who loved teaching children. She’d come around to our garage on a Saturday morning with heaps of poster paint and butcher paper. She encouraged us to be free.”

In-between boating on the Swan River on her uncle’s hand-made yacht and enjoying a carefree childhood, the young Jan continued to find joy in her craft. But when she entered senior school, a fork was planted in her path which – while she didn’t know it at the time – would take Jan away from painting for decades. Having to decide between Art and French as a subject, she reasoned that while she could continue art as a hobby, it would be a much harder thing to learn a foreign language on the side.

“But it didn’t work out that way,” Jan reflects. A busy life swept her up and away. After an overseas working holiday to Europe, she returned to Sydney where she met her husband, a Dane, while continuing a career in mineral economic research. Later, after a busy time balancing work and being mother to two daughters, she moved with her husband to Denver, Colorado, where she ended up running the Australian American Chamber of Commerce, meeting folks like Ernie Dingo, Jeannie Little and Tim Winton.

Jan’s interest in art and culture never dimmed though – particularly her love for 20th century modernist art, the exuberant experimentation of artists like Kadinsky and Matisse. Her adventurous, cross-continental lifestyle gave her ample opportunity to encounter great art across the world, too. On business trips and holidays with her husband, and as a resident of the cities she’s lived, she’d wander through galleries and museums, soaking up the work of masters.

She loved the art museums In Taos and Santa Fe, New Mexico, and visited the ghost ranch of Georgia O’Keefe. On the shore of the Øresund Sound in Humlebæk, Denmark, she’d spend many hours in one of her favourite galleries, the Louisiana Museum of Modern Art. In Copenhagen, she would gaze at the “ladies in long white dresses walking along the beach” and other Impressionist paintings of the Hirschsprung Collection. In New York, she’d lose herself in the labyrinth of MoMA, and enjoy the intimate Neue Galerie, where a famous Klimt painting hangs.

“Back home in Sydney, one of my favourite galleries is the SH Ervin Gallery on Observatory Hill,” says Jan. And she can’t visit the Art Gallery of NSW without “saying hello” to the works of Roland Wakelin, Herbert Badham, Roy de Maistre, Norah Heysen, Grace Crowley and more. When she visits her second daughter in Darwin, she loves to visit the latest paintings in the annual Telstra Art Award for Indigenous Art at MAGNT, as well as the small Outstation Gallery, dedicated to contemporary Indigenous art.

Edward Hopper’s work she is particularly drawn to: its detailed realism, its preoccupation with the alienation of modern humans in a wearied metropolis, and his modernist approach of finding beauty in what previous art movements considered ugly or mundane. So too of Australian artist Jeffrey Smart, whose desolate industrial and city landscapes bear the wearied, yellowed tones of TS Eliot, an early influence for Smart.

Walking the streets of the American city with her daughter (back in a time when such a thing was normal), she remembers seeing the scenes from Hopper’s melancholy oil paintings rise up suddenly on corners, outside bars.

As a newly retired but plenty vivacious woman in Sydney, Jan – remembering the joys of that butcher paper and paint, and inspired by her travels – enrolled in art classes at Willoughby Workshop Arts Centre. For ten years she has been enjoying the varied tutelage of Brandt Lewis, trying her hand at life drawing, still life, a little abstract art and more. Like her pre-school friend’s mother, Lewis encourages his students to follow their own creative impulses, and after a few years, Jan began using her time in class to paint scenes from photos taken during her walks and travels.

This February, her work will even be featured in a joint exhibition at Pyrmont’s Accelerator Gallery with two childhood Perth friends, sisters Robin Davies and Jennifer Tucker. Among those on display will be the originals of Jan’s chimneys paintings featured on the cards, as well as a selection of her paintings of wider Sydney.

While she has Hopper’s fascination with the built environment, Jan’s Balmain paintings – particularly her watercolours – evoke none of his sombre alienation and gloom. Instead, they glow with a tender affection to home; small tributes to this beautiful peninsula, and the deepening relationship residents’ have had with their neighbourhoods since March last year.

A final question occurs after we have wrapped up our interview. Has she sent her greeting cards to her children? While Jan was able to visit her Darwin-based daughter when restrictions eased in November, she has not seen her other daughter and grandchildren for a year.

“Yes, I have,” Jan replies. “My daughter Hanne Larsen in New York shared them on her Facebook page and received many nice comments.”

From Balmain to New York: a message of love.

City, Country & Creativity, a joint exhibition featuring Jan Larsen’s work, will be showing at Culture at Work in Pyrmont from 14 – 25 February 2021. See details below.