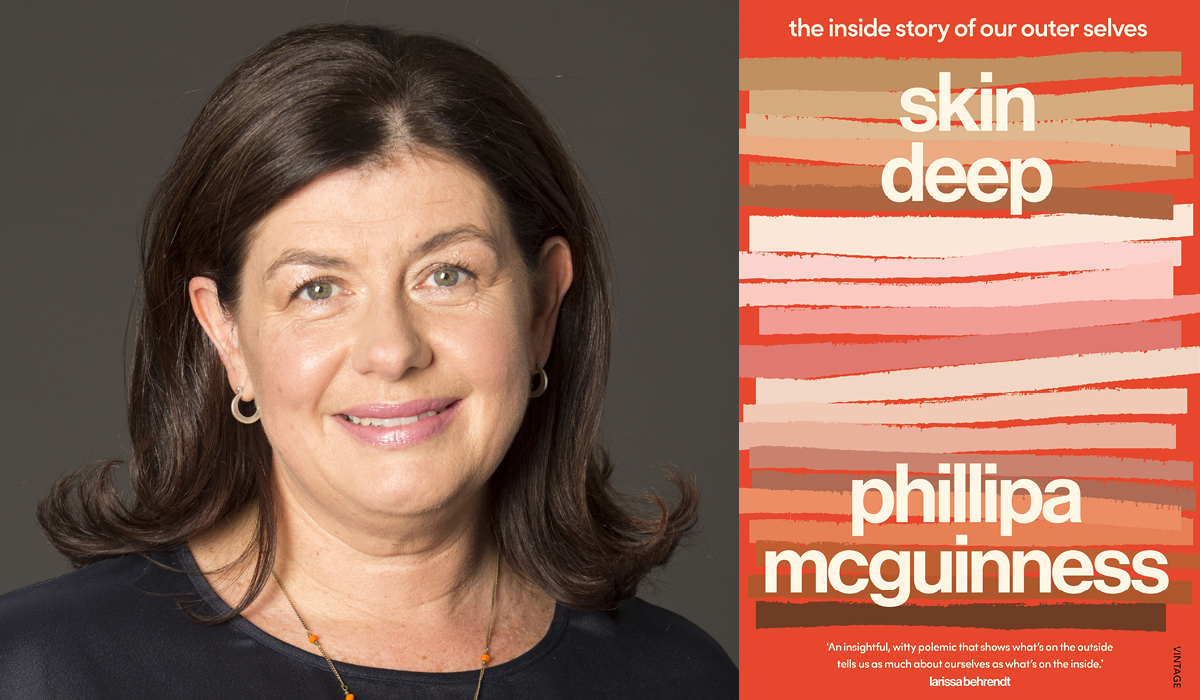 Author Phillipa McGuinness talks with us about her fascinating and wide-ranging book on skin – an accessible read that covers everything from cancer to cosmetics, racism to leprosy, ASMR to the history soap. Skin Deep was also one of Roaring Stories’ nonfiction March release highlights – you can read our mini review of it here.

The origins of your book, and your fascination with skin, began with a health scare. Tell me a little bit about this experience, and how this traumatic episode became a productive impetus for your writing.

This ‘health scare’ is a regular occurrence for me, one that is scheduled in my calendar. Every six months or so, like many Australians – particularly those with a Celtic background like mine – I have a regular skin check with my dermatologist because I have had quite a few non-melanoma skin cancers excised over the years. As a dermatologist put it to me once, ‘Basal and squamous cell carcinomas won’t kill you, but they will make a big mess.’ So I must be vigilant. And, of course, there is the risk of melanoma which, while more treatable than it used to be thanks to immunotherapies, kills around 2,000 Australians a year.

I’m glad that my dermatologist was running late one day a few years back because that gave me a chance to have a good look at my fellow patients in the busy waiting room. I found myself reflecting on why they might be sitting there too and concluded that most were there for the same reason I was: skin cancer. The flipside of Australia’s sun-loving beach culture was playing out before my eyes, and on my own skin. Skin cancer is a widespread problem, but especially for those who were adults or teenagers (as I was) when the Slip! Slop! Slap! public health campaign launched in 1981.

Of course, not everyone in that busy waiting room was a skin cancer patient – there would have been people with all kinds of skin disorders, including eczema, psoriasis or vitiligo, and there were quite a few adolescents who I assumed were there for their acne – one of the cruel things about acne is that it can be so obvious. (This was before we were all wearing masks.) Because this big dermatology practice does cosmetic procedures too, so a few people were there for injectables or laser treatments.

By the time I emerged from my consultation and had paid a not-insignificant sum, I knew that the story of skin was one I wanted to write about in a book.

While your book thrills with the science of skin – its cells and layers, its function as part of the body system as a whole, its physical vulnerabilities and diseases – your book also addresses several significant (and often violent) ways in which culture writes itself upon this most visible organ (i.e. in your chapter on racism). Were these two sides to skin at times difficult to disentangle?

They can’t be disentangled. Especially not by a White writer like me, who has grown up in a country with Whiteness as its default. Even investigating why human beings have evolved with such a broad spectrum of skin tones led to questioning the impact of colonisation, dispossession (done in the name of white superiority, backed up by pseudo-science and eugenics), mass immigration and structural racism.

But one thing that can be disentangled is the fact that race is not a biological fact; it is a cultural fact. Skin colour is often seen as a marker of ‘race’, but skin is not an indicator of anything else, except for eye colour or hair.

Something else that struck me is that not only within dermatology but within medicine in general, illnesses are often misdiagnosed in people with darker skin because doctors are trained to identify and diagnose certain conditions as they present on white skin. Melanoma on people of colour, for example, is often diagnosed later than it is on pale skin, which is significant because early detection can save a life. This default of white skin is changing in medical training, including in medical textbooks. Medical practioners — including dermatologists — are becoming more diverse. But nothing can take away from the shameful fact that colonisation and structural racism mean that health outcomes, skin-related or not, for many people of colour around the world, and Indigenous people in Australia, lag those of white populations.

There is a strange dissonance, I think, in the western world’s skin care regime (especially among the white and wealthied). On the one hand, we spend a horrendous amount of money on cosmetic creams and products which probably deliver very few returns on their extravagant promises. On the other hand, we recklessly expose our bodies to the sun, neglecting the one thing that may prevent premature ageing: sunscreen. Do you think ‘Big Sunscreen’ would do everyone a favour if they pivoted their marketing approach and positioned themselves as an anti-wrinkle product?

That is a genius idea. Let’s make it happen. Your question is on the money, in so many ways. I quote a well-known beauty editor who has seen (and tried) just about every skincare product and lived through many beauty trends for decades. She confirmed that the best anti-ageing strategy for skin, without question, is SPF. But even so, since Skin Deep was published, quite a few people have asked me ‘But what about retinol? What about laser? What about starting with Botox early, what about this or that expensive product or this ‘exciting’ new treatment’ I tell them to avoid sun damage in the first place and every day thereafter. And that’s what I will keep saying.

The short answer, I’m afraid, is no. I think there are a few reasons for this: both patients and other doctors dismiss many of the conditions that dermatologists treat as being superficial, even when they are chronic disorders: severe eczema, for example, may destroy someone’s confidence and sense of self, and make them depressed, but the disease itself will not jeopardise their life. And it can be messy to treat. A lot of very real suffering gets dismissed in a way that I don’t think happens with other chronic conditions.

One other complication arises because many dermatologists perform cosmetic treatments alongside the medical work they were trained to do. Even when they bring high levels of skill and expertise to these treatments, or oversee them to ensure basic clinical hygiene is maintained, or are on-hand should something go wrong, these treatments are rarely essential for the patient in a medical sense. But they are lucrative for the doctor. Non-dermatologists and non-plastic surgeons do this work too, including cosmetic surgeons who have far less training, and whose work and qualifications are far less regulated. Nurses and beauty therapists in suburban clinics offer many of the same treatments, injectables and laser for example, at lower prices. It is understandable that many people conflate the various kinds of doctors, including GPs, doing this work. This damages the reputations of genuine skin specialists and perhaps trivialises the importance of skin overall, suggesting that it’s somehow ‘superficial’.

It’s clear that a substantial and wide-ranging degree of research went into Skin Deep – conducting interviews with scientists, specialists and citizens; reading journal articles alongside novels like The English Patient (with the protagonist’s scorched skin); analysing shows like The Singing Detective (with the protagonist’s devastating psoriasis). By the end, while you have covered much ground, is seems as though – excuse the pun – you have just scratched the surface on skin. A very satisfying scratch that produces an itch in this reader to know more! For you, has your fascination with skin outlasted your book’s final draft?

I did lots of research, that is true, and enjoyed it very much. I am pleased to say my interest has not waned. I keep coming across literary references to skin that, had I read them a few years earlier, would probably have ended up in the book. I hope to do some more research and writing about the skin microbiome that takes in Australian sources, not for another book, but for a more general article. It is a really fascinating area that experts are just starting to understand.

I would also like to talk to some people with psoriasis whose condition has been transformed by the various treatments known as ‘biologics’ which, for some people with the disease, have been genuinely miraculous. And I find myself monitoring the rise and fall, though mainly the former, of many skin clinics. I probably pay more attention to beauty and skincare products now, but no-one could possibly keep track of everything. But I continue to be bemused by their outlandish promises.

You looked through probably thousands of close-up images of skin diseases. Is there anything you wish you hadn’t seen? Or some particular insight into skin that now haunts you?

I recall sitting in on a dermatology webinar that a researcher, who was not a clinician, was contributing to. In other words, he was someone who I expect spent his days in a lab, not seeing patients. He didn’t realise his mic was still on and when one of his co-presenters put up a slide of one of her patients with badly ulcerated legs caused by untreated skin cancers he gasped. Everyone could here him. Then he said, ‘How the f*** did people let it get so bad?’ That, to me, seemed like a reasonable response to a shocking image of terrible suffering. One of the dermatologists on the panel basically said this is what happens when skin conditions get dismissed as being trivial, only on the surface.

How has your relationship with your own skin – from how you care for it, to how you perceive it – changed after writing this book?

After I had the expensive facial that I write about the book, a mild retinol cream (a form of vitamin A that supposedly speeds up the turnover of skin cells) has become part of my skincare routine. Who knows if it has made any difference, but lots of people seem to think it helps the appearance of ageing skin. Having said that, my skincare regimen is nothing to write home about. I have always been fastidious about applying SPF, but I think I’ve gone through more tubes of it than I might have had I never launched into writing Skin Deep.

I knew that BCCs were a very common skin cancer, but somehow learning of the true extent of them made me realise I was in good company at least. But having had 5 by 55 does make me worry about my dermal future. But for now, I’m happy in my own skin.

Skin Deep by Phillipa McGuinness was published by Penguin in March 2022. Signed copies are available at Roaring Stories Bookshop Balmain.