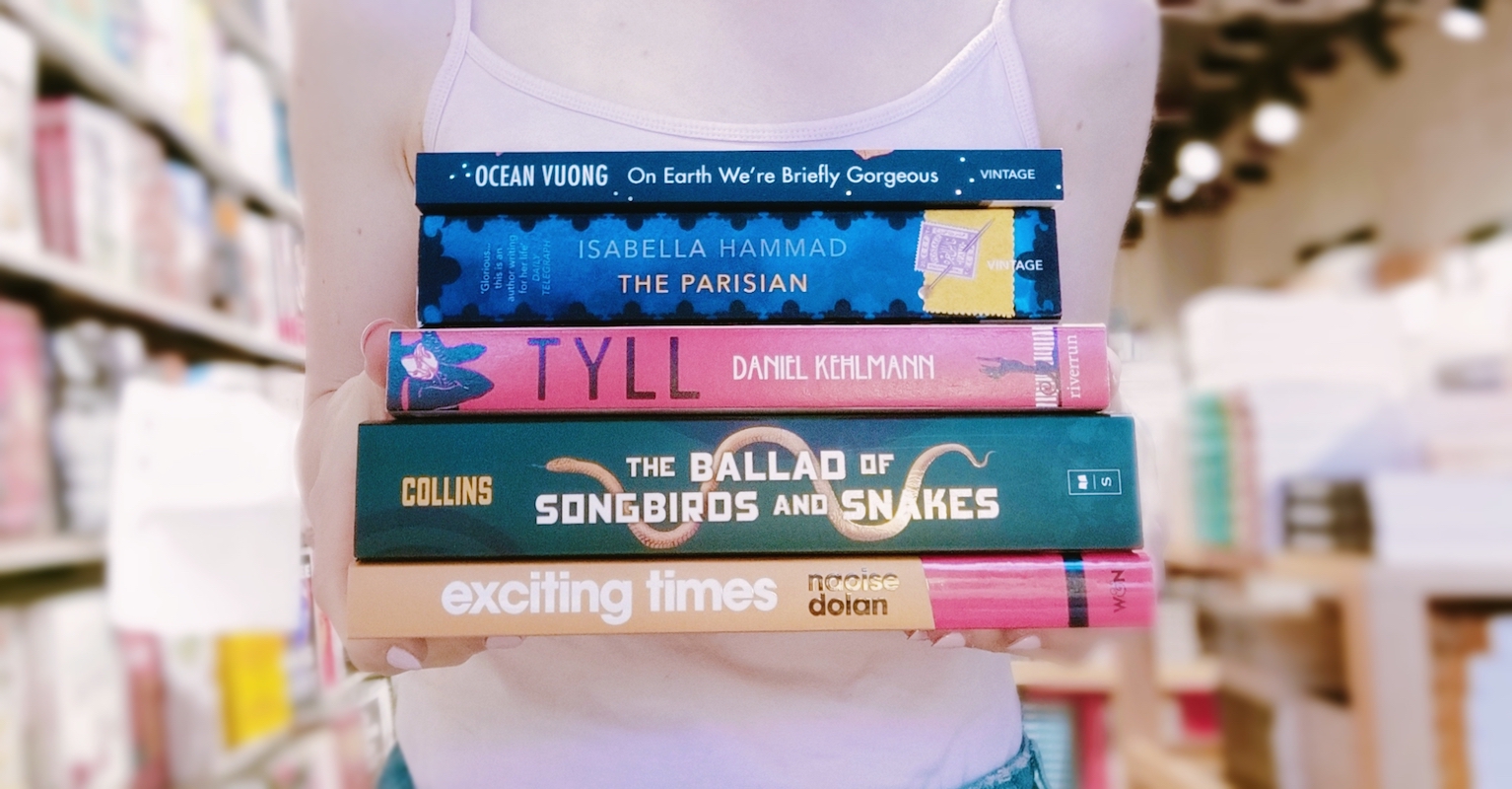 They were there for us when we most needed them, spiriting us away to worlds other than this. Here, the Roaring Stories staff reveal their favourite reads of 2020.

My favourite and best read for 2020 is The Parisian by Isabella Hammad.

Hammad has created an incredibly immersive story about a fascinating period in history (the end of the Ottoman Empire and the growing unrest in the Levant area between WWI & WWII), all told from a Palestinian point of view. She has used a traditional, classic style of storytelling which suits this time period perfectly.

Hammad’s writing is just lovely and Midhat’s story, utterly absorbing. It’s hard to believe this historically rich, self-assured novel is a debut. Midhat is loosely based on Hammad’s own great-grandfather, Midhat, who went to Paris to train to be a doctor during WWI. On his return to Nablus, he continued to affect a Parisian air much to the amusement of his family, who teased him about his Parisian ways for the remainder of his life. These are the stories that Hammad grew up listening to. Her grandmother, Ghada (who features briefly as a young girl towards the end of the book) was the main source of these stories about this gentle, sensitive man who happened to live his life during extremely turbulent and ‘interesting times’.

The Parisian is a book worthy of your time. It rewards, delights and informs the reader, in much the same way that a careful read of Dickens or Zola does. I’m very curious to see what Hammad might do next. The Parisian was the winner of the 2019 Palestine Book Awards.

Bron’s highly recommended reads for 2020 are: In Love With George Eliot by Kathy O’Shaughnessy, Girl, Woman, Other by Bernadine Evaristo and Moby-Dick by Herman Melville.

Daniel Kehlmann’s Tyll is an illuminating human portrayal of Europe during wartime, combining elements of fable and fairy tale. As Kehlmann walks his readers through the forests and warring states of 17th century Europe with the trickster character ‘Tyll’ always just around the next bend, I thought of Norman Davies’ fascinating history of forgotten Europe, Vanished Kingdoms. A moving and fascinating novel, I most enjoyed Kehlmann’s ability to make clear through the power of fiction the complicated history of the region during the Thirty Years War.

What most resonated with me, though, is the author’s portrayal of a Europe full of forests and the realm of magic – there to be imagined and persecuted in the name of religion – and these same forests opening to clearings where the stuff of the storyteller is found. I’ve read two of Daniel Kehlmann’s earlier books and when I noticed Tyll on the shelves a few months back, I purchased it in an instant with a sense of anticipation, as if it were a new album by a favourite band.

The Summer Isles by Philip Marsden is a wonderful exploration under sail of the west coast of Ireland and the Inner Hebrides to the upper Summer Isles in Northern Scotland. Equal parts travelogue, exploration of real and imagined places and their links to ancient lore and sailing adventure, Marsden embarks single handedly on this voyage to The Summer Isles in a timber yacht, The Tsambika.

Marsden’s evocative and descriptive writing style on places completely foreign to the eastern coast of Australia, coupled with recollections of anecdotes and encounters with people along the way, makes The Summer Isles one of the finest travel books I have read in a long time. This wonderful book resonates on multiple levels however his detailed descriptions of the passage sailing experience in these waters are brilliantly observed. I will now be hunting down other Philip Marsden titles.

Shanti loved…
The Ballad of Songbirds and Snakes

I loved this book! It was so much fun jumping back into the Hunger Games universe with amazing new (and old) characters. Suzanne Collins really does a wonderful job of bringing the world to life with meticulous detail, creating a solid foundation for the events of the main series to occur. It was refreshing to have less focus on the life-or-death battle the characters must ultimately face, and instead explore the interpersonal relationships, social standings, and long-term effects The Hunger Games have had on these children. I love worldbuilding, and this book expertly delivers everything you want to know and more, leaving you turning the pages over and over until the end.

I’ve read such a great bunch o’ books this year that it felt rude picking just one favourite, but I’m going to go with Exciting Times by Naoise Dolan.

With Dolan being a witty Irish millennial writing an emotionally intelligent novel about millennial relationships, I am legally required to bring up Sally Rooney* (*I am not legally required to bring up Sally Rooney) but I think it’s an actually valid and mutually complimentary comparison. If you liked Normal People, Exciting Times could be its more acidic step-sibling, though it absolutely has a hyperarticulate, incisive, vinegar-hilarious voice and vision of its own.

Dolan’s protagonist Ava is a Dubliner adrift in Hong Kong, falling in first with emotionally distant banker Julian and then earnest, affectionate lawyer Edith. She spends most of her time engaging in brilliantly sardonic introspection and analysis of the emotional dynamics and power nuances within relationships­; of “the personal and financial transactions that make up a life” (a neat phrase I’ve filched from the blurb). Super engaging reading. Loved it. What a time. An exciting time!!! (anyone??)

One of my favourite books from this year is On Earth We’re Briefly Gorgeous by Ocean Vuong. Vuong’s debut novel begins as a letter from a son to his mother, exploring their family’s history in Vietnam during the war, and the impacts this has on their lives and relationships after moving to America. It consists of fragments and memories of the narrator, only ever referred to as ‘Little Dog’, coming together in a story of culture, family, loss, and identity all written in Vuong’s poignant and lyrical voice.

It’s not a recent release (it came out in 1986), but my absolute favourite book I read this year has to be Mary Oliver’s Dream Work. From the first poem in this collection, I was immediately enveloped in the Pulitzer Prize winner’s otherworldly imagery and style. Bits and pieces of this book kept resurfacing in my head in the weeks after I read it, and there are many poems from Dream Work that I’ll revisit again and again.

Dream Work explores a lot of Oliver’s fascination with our connection to the natural world and, by extension, each other. Her poems are all so wonderfully unique and introspective, there’s something in this book for everyone. In such a tumultuous year, each poem in this classic collection is a moving read.

I love the fantasy genre for taking me away to different worlds, and Astrid Scholte has this nailed. The Vanishing Deep is set on a planet where land has been almost swallowed up by the oceans, and people have learned to live on the sea. Drowning is a sad fact of life, but new science allows victims to be revived for 24 hours to say a final goodbye to their loved ones. This is the goal that 17-year-old Tempe has been saving towards for years, not to say goodbye to her older sister Elysea, but to yell at her and demand answers – why didn’t you tell me our parents aren’t actually dead, and where are they really?

The story weaves together themes of romance, sci-fi, mystery, morality and especially family, with realistically complicated characters put into difficult situations. Scholte is a master at creating the atmosphere of a place that engulfs the reader from the start, making you feel like you’ve lived in Tempe and Elysea’s world your whole life, laughing with their friends when they celebrate and losing yourself in the music when Elysea dances. I put this book down aching with feeling, grief and joy and sadness, for the people and places I became invested in between the covers. I can’t wait to see what she writes next.

Honourable mentions also go to: Hollowpox by Jessica Townsend, The Rúin by Dervla McTiernan and Death Leaves the Station by Alexander Thorpe.

Katerina Bryant’s debut work Hysteria is a must-read for any woman who has experienced chronic illness. It follows Bryant’s journey of mental illness, with a large focus on her chronic seizures – with Bryant herself, as well as the doctors in her life trying to figure out if what she’s experiencing is epilepsy or something psychological.

In her memoir, Bryant explores these seizures in searching ways. She links them to past treatments of women with hysteria and current thought on de-personalisation. She questions medical norms as well as current understandings of mental health and therapy. At the end, she notes that writing the book healed her of her “fear of being sick forever”.

I found reading Hysteria to be cathartic – prompting me to question my own medical journeys and chronic conditions, and learning to make places to accept my difference rather than fear it.

Okay so I have already gushed my adoration of my chosen book in another Roaring Stories post published earlier this year. I have little more to add to that review except to testify that my reverence for debut literary fiction author Shubhangi Swarup, and my memory of her sweeping, intoxicating chronicle, has found a permanent place in the bookshelf of my heart. I gushed, and I continue to gush with longing for another to come along equal to Latitudes of Longing’s fertile majesty.

This year was the first in which I have owned, as an #independentwoman, an actual television. This gleaming, moving entertainment vortex has mounted many battles against my shelves this year, and won more than I care to admit. Despite this, I think I have read more books in 2020 than any previous year, excepting that period in junior school in which it is quite easy to power through books of large print, a preponderance of dialogue and often less than 150 pages long.

Among the faves: I discovered [Sic], an electric literary memoir from Scott Kelly, who as a New York artist writes to work through an illness that threatens his life – it’s quite possibly neck and neck with Swarup’s book as top 2020 read, along with Nicholas Shakespeare’s The Dancer Upstairs. I finally opened Educated, a gift from my mum, another incredible memoir which has received far more renown. I loved the subtleties of race relations and white hypocrisy as depicted in Kiley Reid’s darkly funny Such a Fun Age. Goaded by the Netflix film directed by Charlie Kaufman, I read the slender surreal masterpiece, I’m Thinking of Ending Things by Iain Reid. I still can’t get over the images of locomotive violence in Zola’s The Beast Within.

Besides the purchase of my first TV, I own this year my first ever couch – a blue velvet beauty, overhung with an IKEA lamp. There’s always a pile of books near its feet or on its shoulder. It’s been my mode of transport to many worlds.