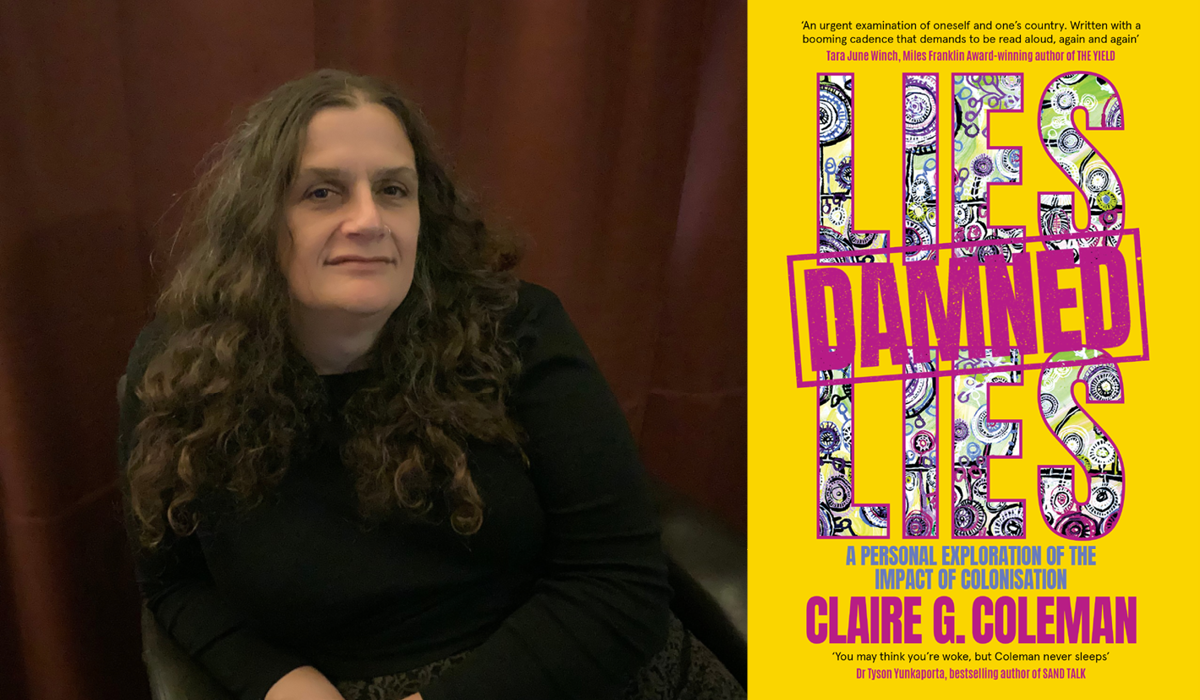 ‘The first step is truth-telling’: Q&A with Claire G. Coleman

Lies, Damned Lies by Noongar woman Claire G. Coleman is, writes Tara June Winch, a work that ‘demands to be read aloud, again and again’. A deeply personal and searing rebuttal to the egregious historical myths created and perpetuated by this land’s colonisers, it journeys to the rotten heart of the continent and lays down undeniable truths. We spoke with the award-winning author about the book, out this month with Ultimo Press.

In Lies, Damned Lies you call out and call bullshit on some of the most outrageous and perniciously persistent settler colonial myths that our nation is founded on, has developed from, and continues to monstrously grow on. Why, when they appear to be so flagrant, have those lies endured so stubbornly in the white imagination?

White people benefit from the lies, when a lie is upheld we can work out why, in most cases, by looking at who is benefitting. In the case of Australia it’s non-Indigenous people, settlers and colonisers, who benefit. The lies persist because they want them to.

You and your family have been hugely impacted by the genocidal project of settler colonialism, in a way which wasn’t fully known to you until you were an adult. Can you tell me a little bit about this terrible revelation?

There were two revelations that followed each other closely. The first was the discovery that we were Noongar, which was a powerful and beautiful thing to discover. I am so proud of being a woman of this continent, I am proud of my ancestry and I am proud of my family who sacrificed everything so that I might have a life.

The second revelation was the terrible one. My family have been directly affected by the colonisation. We had a massacre in the town where my grandfather was born, on Country, we lost our land and our culture. I am furious about what has been done to my family, and that fury drives a lot of my work as a writer.

As you write in the book, colonisation is a process that is ongoing, not an event that happened in the distant past. Is a fully decolonised nation possible? What could this place look like?

I would like to say decolonisation is possible but it might not take the shape other people might expect. We can’t decolonise by going back to before 1788, we must decolonise by creating a post-colonial world. I don’t know what that will look like, it’s hard to see it from here, in the middle of a colonial genocide, but I can see some steps that might lead us there.

Firstly, colonisation being a process we need to first stop the process before the genocide is complete. Secondly, non-Indigenous people need to become people of this land, need to stop being “British”. Australia needs to stop trying to be the white nation it never was and admit what it is, a multicultural colony on stolen black people’s land.

Are you hopeful that you will see substantive and meaningful steps towards decolonisation in your lifetime? What could just one of them be?

I think the first step is truth-telling. Most decolonised places and places in the process of decolonisation are aware of that. Take South Africa, for example. They have problems there, that much is clear, but they, at least, have started a truth and reconciliation process. In Australia the white people demand “reconciliation” without “truth”, which is impossible.

The historical amnesia of White Australia when it comes to our own past is staggering. Just one example you give in the book is how our own current prime minister thought that Captain Cook circumnavigated Australia, and was planning to “recreate” this fictitious voyage in 2020 with taxpayer money – and few people realised the whole enterprise would have been a farce. Is the education system broken, or is it working exactly as it was intended to continue the myths of terra nullius?

The education system is like it is by design, because it was built and intended that way. In reality, the truth, the real history of Australia does not shore up the myth. It continues, with Education Minister Alan Tudge directly attacking truth-telling and re-examinations of Australia’s history. Our current government has shown a determination to support a European-centric view of history, to look back rather than accept that the way we view history has changed. The easiest way to understand this push is through the lens of seeing them as white nationalists.

This is your first work of nonfiction after publishing the spec fic dystopian bestseller Terra Nullius in 2017 and The Old Lie last year. How does writing fiction feel different to writing nonfiction, and do they feel similar in any way?

I have tried to maintain my style and voice in this new work so in that way it’s the same.  However, non-fiction is different in so many ways, no matter what style and language I use I still have to get everything right. The criticism of non-fiction can be a lot more harsh, the editing is therefore more serious.

Your publisher Ultimo Press told me that you’re in Alice Springs! What brought you there? Tell me what it’s like being on this land for you.

We were traveling on one of our almost legendary long road trips, taking in Aboriginal art and culture events, when the rolling outbreaks and border closures started messing with our plans. In the end we ran for Mparntwe, because we had friends here, and there had never been a COVID outbreak here. Once we got here our car broke down.

I love Mparntwe, the desert country is beautiful and the culture of the people here is powerful. This place exerts a magnetism and seems to pull Indigenous people into its orbit. It has been particularly amazing during the Desert Mob art festival last week.

Lies, Damned Lies by Claire G. Coleman was published by Ultimo Press in September 2021. To order a copy from Roaring Stories, get in touch.