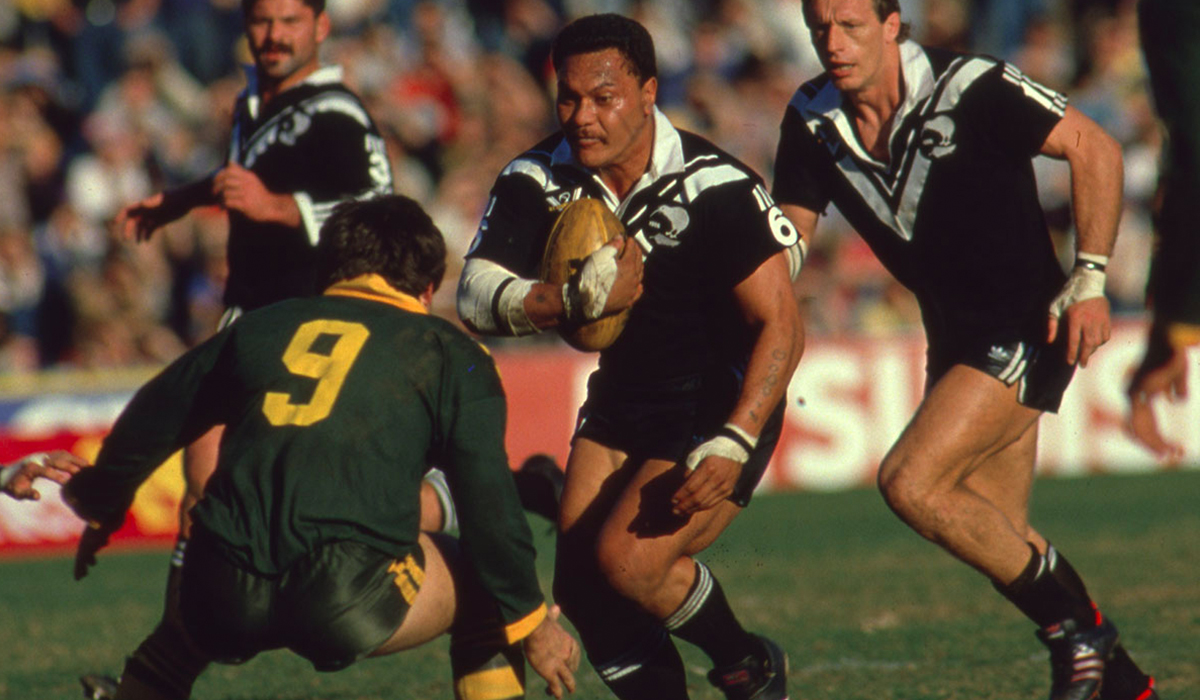 When he slammed into his doomed mark, the hill went quiet. When the ball appeared in his hands, floating beneath that huge, ever-present grin, people stood up. He was an excitement machine, an unstoppable force when in form. The Galloping Garbo, they called him. Archie, for his ‘Archie Bumper’ technique of driving over the competition. The Big O. He represented his home country for the Kiwis and won Man of the Match, and is an exalted hero in the NZ Legends of League Hall of Fame.

Yet for much of his premiership career in Australian rugby league, Olsen Filipaina was left to stagnate. There was treachery from teammates and open racism from fans. Media branded him ‘The Enigma’ – not because he was a mystery, but because there was an ignorance-enabling, deeply entrenched will not to understand the Polynesian culture that made him a different kind of player and a different kind of man. He resisted the training that punished his heavyset body, and was jeered lazy. He was gentle-spirited, and some mistook him soft.

The immense asset Olsen was to the Balmain Tigers over five seasons was squandered, as coaches bullied him to conform to a regime that removed his individualism and erased his history. For months-long stretches, he was shunted to reserve grade, the dogs of depression rounding in.

For all his incredible feats, when Olsen retired in ‘87, he slipped almost soundlessly into anonymity. He was always elusive. To this day, he continues as a garbage collector around his home suburb of Ryde – a job he’s had since he was walloping Wally Lewis.

“The era was the villain,” says Patrick Skene. A sports writer and chief officer at a multicultural marketing agency, he’s been an Olsen fan since boyhood.

“I remember when I was nine, seeing his footy card and the seashells around his neck,” he says. “He was just different. And that’s what you’re looking for, as a young boy, some kind of point difference to attach yourself to. Olsen had a lot of variables that made him stand out.”

When Skene was commissioned to write a series on forgotten sporting heroes for Guardian Australia, he immediately thought of his old role model. When published, Olsen’s story blew up. It became the most clicked-on story for Guardian Sports that year, shared hundreds of times from both sides of the water. From these rumblings of redemption, The Big O was born: a biography of Olsen which tells the story of a Pacific Revolution pioneer, the folly and the tragedy of cultural incompetence, the action-packed triumphs on the field, and the man who bravely carried it all. Skene relays the saga through a throng of voices, including players like Wayne Pearce and Steve Roach, league icons like Graham Lowe, Sir Peter Leitch and Arthur Beetson and sporting heavyweights – some literal, like the Samoan-born boxer David Tua.

And of course, Olsen himself. Not that getting him to talk was particularly easy. This is a man who used to hide in the player’s bathrooms to avoid a media ambush. Notoriously shy of attention, he is a big-hearted man of few words. How on earth did Skene – a ‘cultural outsider’ what’s more – get past his line of defence?

“He took me to a really nice restaurant,” Olsen says, chuckling. A Greek one he’d heard good things about up in Sydney’s north. Skene plied him with lamb chops. Olsen listened. When Skene assured him it wouldn’t cost him a cent, that sealed the deal. Skene also promised him an even split of whatever profit the book makes.

“It’s like my mum says. Go with the flow,” says Olsen, and laughs again. He doesn’t like to leave Ryde much these days, where he’s still recognised on the collection route. But he can’t wait to get back to New Zealand. His son is expected to be released from jail this year, and Olsen was hoping this would open up the chance to return home after all these decades. Sydney hasn’t exactly been kind to him: this, the book makes devastatingly clear. But the virus has scuppered his plans – as well as much of the book signing tour.

It did take 12 months of strategic cajoling on Skene’s behalf to build up the trust needed to make the book work. Olsen’s wife Leslie was “instrumental” in this, says the author. After a time, Olsen did choose to talk with atypical candour about what he went through. The book reveals the violence he and his mother suffered under the blows of his alcoholic father (who he still sent most of his earnings to without fail); the struggles with mental health during his low points; the ostracisation and abuse he endured. What Olsen doesn’t share are the names of his racist abusers. This was also his choice.

None of his folks back home were aware of what he was going through – until they read the book. “They had their own problems to worry about,” Olsen shrugs.

Skene didn’t only seek Olsen’s permission to write The Big O. At a big gathering on the Gold Coast, he sat down with Olsen’s family and told them his plans, and that what he wrote would likely bring up some confronting details from the past.

Before the book went to print, he also got the book culturally checked with experts. In the end, the biggest resistance he got to the book was from Olsen’s old coach Frank Stanton, who does not come off well. (It took Skene a year to work up the guts to make the phone call to Stanton, now in his eighties. “Part of me says I should send him a copy. The other part says just leave him alone.”)

Today, Australian rugby league is a sport which boasts a powerful contingent of Maori and Polynesian players. Coaching styles have changed to be more inclusive and flexible. The stands still have their toxic elements, but there’s a greater diversity among spectators, too. Olsen was the trailblazer to this new future.

“Olsen knew what was coming,” says Skene. “He wasn’t some kind of ‘right place, right time’ Forrest Gump. He knew what was bubbling over in Auckland, that the game was suited to Polynesians.”

Though still as humble and down-to-earth as anything, Olsen wears the title of ‘pacific revolution pioneer’ proudly. He accepts the recognition, belated though it may be, last month appearing on ABC’s 7.30.

And despite everything? If he was a young, fit player in his twenties again, it’d be the Balmain Tigers that would be his team of choice.

“They stuck together,” he says. Plus, there’s nothing like that atmosphere on Leichhardt Oval.

The Big O by Patrick Skene was published in May 2020 by Upstart Press. Signed copies are available at Roaring Stories Bookshop Balmain. (The perfect Father’s Day gift for the league-loving dad?)