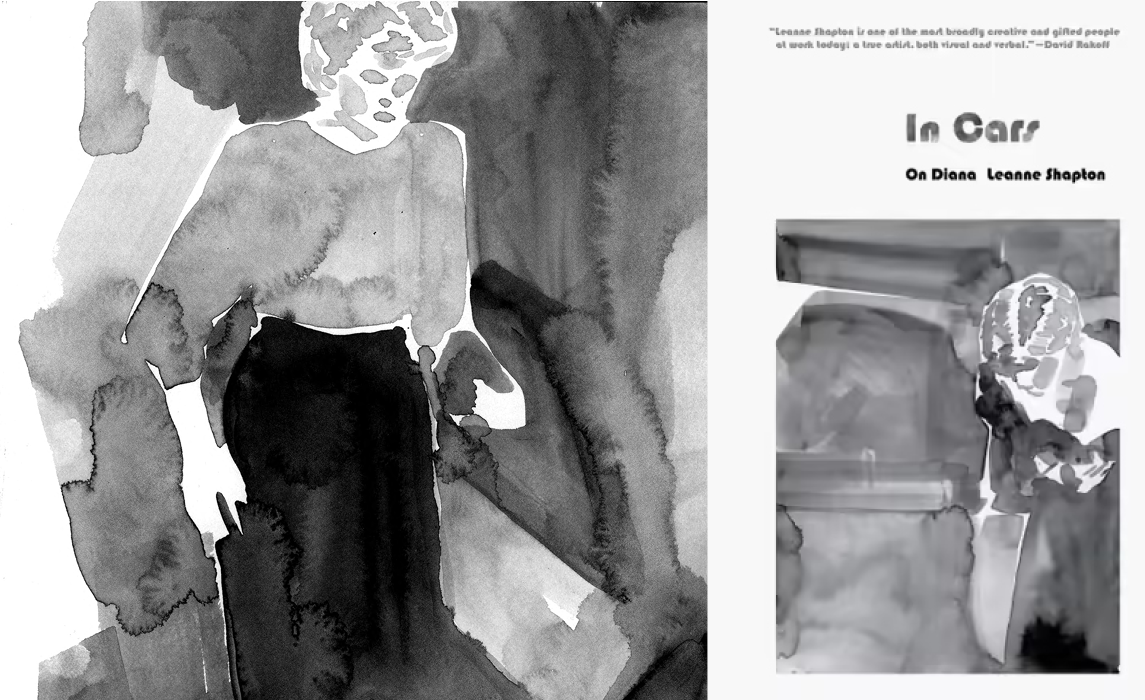 Her watercolours have appeared on the covers of books by Alice Munro and Thomas Bernard; illustrated Roberto Bolaño’s fiction in the Paris Review, run in a New York Times series called ‘Thursday Nights Out’, and featured the New York Review of Books, where she holds the position of arts editor. A Canadian based in New York, Leanne Shapton is more than an artist though. She is the author of several books, including the award-winning Swimming Studies, and is the co-founder of a small and exclusive nonprofit press J&L Books, which publishes two to five artist’s books a year.

Much of her work has an obsessive, curious and conceptual quality, which evolves gently through repetitions of a theme. In her latest book, In Cars, her fascination is with the image of Princess Diana getting out of cars. There are thousands upon thousands of paparazzi shots taken of the mythologised celebrity royal in this threshold position – half in the private space of the vehicle (signifying for her both safety, freedom, movement and death), half out in the public space, where her identity becomes something fought over, exploded into media sensation. In page after page of her slim new book – part poem, part visual essay – Shapton has created anew some of these photos in her idiosyncratic art style, producing a meditative, graceful and quietly subversive work.

Read our Q&A with Shapton below.

What do you recall about the impulse that led you to paint in watercolor the first paparazzi shot of Diana? Was it something about the photograph itself? Where did you come across this photo, and – of all the thousands of images of Diana – which ones were you subsequently drawn to most?

I can’t recall the first one I did. I was drawn to the number of pictures there are of Diana getting out of cars. I paint from old media, reference books, reference photography, and look for patterns and shapes that appeal to me. I was drawn to what I felt was the very uncomposed modern choreography of a person getting out of the backseat of a car, and how and why this awkward movement was replicated and became this portrait of a woman. I liked the images that felt a bit awkward, mid-stride, mid-motion.

The book is a study in repetition, and what repetition can yield, and what it cannot. Your other books, too, have this preoccupation – some would say obsession. What drives this recursion?

I tried to write about this in my book Swimming Studies. I think it comes back to my swimming practice, I believe that repetition is training, that it is study, that it will transform with pattern/contrast, comparison. I also like to change photographic images, which are built to be repeated, back to single, discreet original pieces. I try to slow down how I see pictures.

Your book reminded me of a passage from Roland Barthes’ Camera Lucida: ‘The person or thing photographed is the target, the referent, a kind of little simulacrum, any eidolon emitted by the object, which I should like to call the Spectrum of the Photograph, because this word retains, through its root, a relation to ‘spectacle’ and adds to it that rather terrible thing which is there in every photograph: the return of the dead.’ When painting the images in your book, how did you conceive of those two modern machines which figured so significantly in Diana’s life (and the lives of celebrities) and her death – the car and the camera?

I think both cars and cameras vitrine people and bodies. They sort of defy space and time, and our reliance on them is huge. I think at its heart, photography tries to – as Barthes says – return the dead. This series is another one of my ghost stories I suppose.

Dozens of your paintings precede the writing. When those clearly delineated lines of text appear, very late in the book – after such a hypnotic, blurred sequence of facsimiles of the same threshold moment – it is almost shocking. What was the intention behind this structural relationship between the images and the text in the book?

I think we’ve become very sophisticated readers of images, and with books, sometimes frontloading a foreword or intro or essay can inflect the reading of the images that follow. I wanted the text to sort of seep into the reading of the images. It started as more of a straightforward essay, and I played with the form of couplets to try to measure out the reading. I’m not sure how successful it is. But it was fun.

You’ve now painted hundreds of photographs of Princess Diana getting out of cars. In the process, have you uncovered anything you did not expect about the person, or what she represented? Has she become clearer in your imagination, or more elusive?

This isn’t a book about Diana the person. I’m not very interested in the Royal family, but I am interested about their iconography, the formal images, as a Canadian, that I grew up with, and the informal ones I painted. I’m very interested in what she did to the history of photography and sovereignty. How her informal image was prized, valued, scrutinised.

Your book seems to propose that photography can perform a kind of violence to the living person, fixing them in a glamorised stasis so that they become more significant as a product of mass ownership and consumption than their flesh and blood self. Does art have the ability to restore grace and dignity to a person?

I think art can offer another perspective. I don’t know if these images restore dignity. I was not trying to paint likenesses of Diana, but her body language became beautiful to me, how she struggled with and made certain gestures almost a dance. In the back of my head I kept thinking of how the choreographer Martha Graham transformed Michelangelo’s pieta.

With the smartphone and the rise of Instagram, the photograph is more ubiquitous than ever as a way of capturing, ‘consuming’ and conceptualising the self and others. How do you feel about this?

Wary. I don’t like how much I turn to photography for proof, truth, reality. I want to have more innocence, I want the real thing.

In Cars: On Diana by Leanne Shapton was published by Tablo Tales in April 2022. Find copies at Roaring Stories Bookshop Balmain.