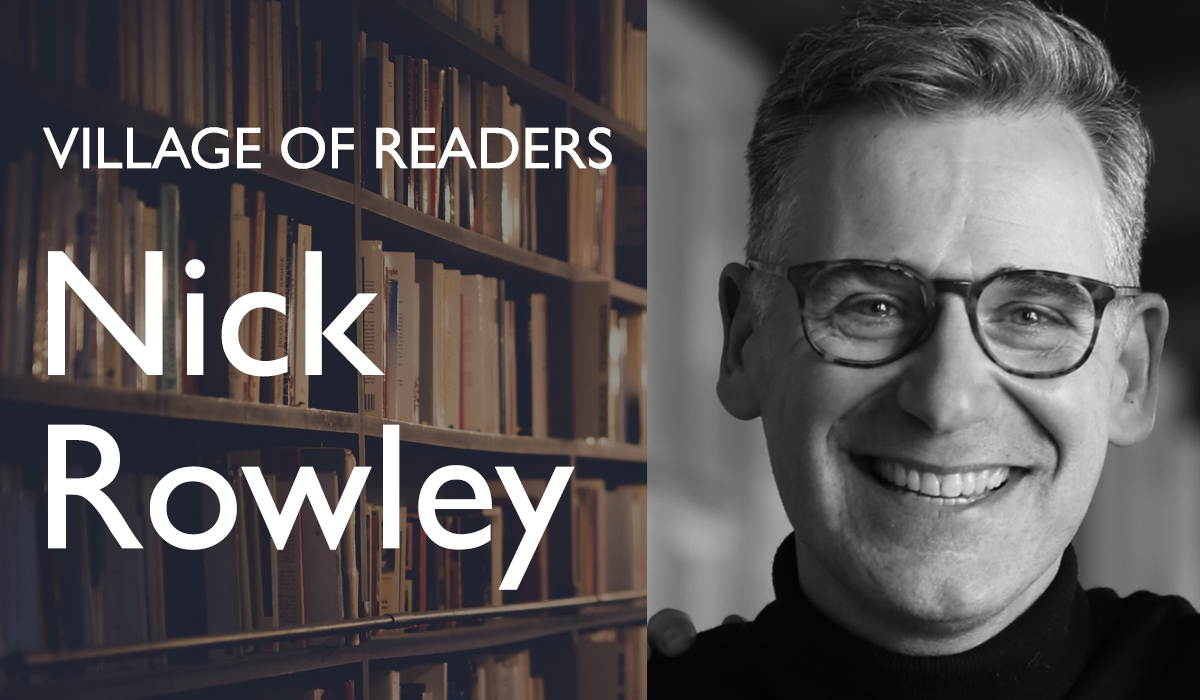 Nick Rowley has been a purveyor of literature at our Darling St shop for decades. Originally from the UK, this father of three has behind him (and very likely in front of him, too) a storied career. In his former and current home on this beautiful peninsula, he has worked as an adviser to Bob Carr, a chaperone to Gore Vidal, an initiator of the Stern Review under Tony Blair, and a Strategic Director of the Copenhagen Climate Council with Tim Flannery. You may have seen him on The Drum, talking Brexit and climate change; you may have sat in one of his public policy lectures at the University of Sydney; or you may have watched him sailing by on this blue bicycle, a fresh new read tucked inside a front basket hand-made in Copenhagen. Here, as our second Village Reader in Roaring Stories’ new series, Nick shares his reading histories, preferences and loves.

What are you reading right now?

Say Yes to Life In Spite of Everything by Vicktor Frankl: a series of lectures previously unpublished in English, delivered following his survival after time in four concentration camps, the murder of his parents and the killing of his wife and unborn child. As in his seminal work Man’s Search for Meaning, Frankl explores ‘how to be’. His insights remain enormously powerful, useful and uplifting.

But there are always a few books ‘on the go’. Not enough fiction. Looking at the pile, Hannah Arendt’s truly amazing The Human Condition and the incredibly useful Australian Birds of Prey in Flight Photographic Guide by Seaton, Gilfedder, and Debus.

Luckily, we can still see a few raptors on and around the Balmain peninsula.

Was there anyone in your life who inspired a love of reading?

I was lucky to grow up in a house where there were a lot of books on the shelves, by the bed and next to a chair or sofa. But more than my parents, two English teachers (particularly Mrs Airey) at my North London school were enormously encouraging.

My family was very verbal. With opinions flying off the walls, I soon wanted to understand whether that was right or true or as compelling as it sounded. It was books, and still is books, where the answer, or a new perspective, is to be discovered.

You’ve been visiting Roaring Stories (formerly Brays) for many years now. Do you remember any of the first titles you purchased at the store?

For a few years Philip established the kids’ bookshop further up Darling Street. This was perfect timing for my wife, myself and our three children. Of all the wonderful children’s literature on the shelves, whenever a new John Burningham book would appear, I would be there. More than books ‘for’ children, they are books with a lightness of touch and a powerful beauty which speaks to us all. Burningham died at the age of 82 last year. His obituary in The Guardian referred to his genius lying in “an ability to communicate in a childlike but never childish visual language and in his understanding of the mutually exclusive worlds of childhood and adulthood”.

If any young parents want a treat, do just go and ask Bronwyn or Tim to order in Courtney. He is a very special dog . . .

In Australia and overseas, you have had some extraordinary and influential roles. How do you make time for reading with your busy professional life, and do you gravitate towards any authors or genres during times of stress?

In times of stress I don’t gravitate towards books. I might play some music, go for a walk, contact a friend or try and find a bird. Birds are always living in the present. I may also think about some of the people I know, or knew and consider ‘how would he / she choose to be in this situation?”

I am almost certain my professional life is no busier than anyone else’s. Most likely considerably less busy! But I wish I read more. I have never been a fast reader and still annotate almost everything I read. I am not sure if it is a good or bad thing, but my curiosity and interest means much of my reading is my ‘work’. Whether it is a book on the psychology of climate change denial, or on ‘hyper-partisanship’ in politics, social psychology, leadership, management or avian intelligence (!) they are all the mental equivalent of a delicious, varied, meal.

You are an advocate for action on climate change. What are some books – fiction or nonfiction – you find most powerful in depicting the global crisis?

There are others in Australia and globally who are much better at advocacy than I am. I hope we need less advocates in the coming years and have more people working on the ‘how’ – not the ‘what’ – questions.

I was fortunate to know the first Head of the Intergovernmental Panel on Climate Change Sir John Houghton. Although his Global Warming – the complete briefing is now out of print, it provides the clearest grounding in the basic science. Mark Maslin’s Global Warming – A Very Short Introduction in the excellent Oxford University Press series is also very fine.

Nick Stern’s latest Why Are We Waiting – The Logic, Urgency, and Promise of Tackling Climate Change is every bit as brilliant as his seminal 2007 review. It is here that he makes the powerful ethical and moral case for acting to reduce the risk of global climate change. Naomi Klein’s This Changes Everything is brilliant on the diagnosis but less good on the necessary prescription. But she writes so compellingly and gets to the heart of much.

If you could pick three books to take with you on a desert island, what would they be?

Roaring Stories patrons: do you want to feature as a Village Reader? Email marketing@roaringstories.com.au, or put your name forward at the store.