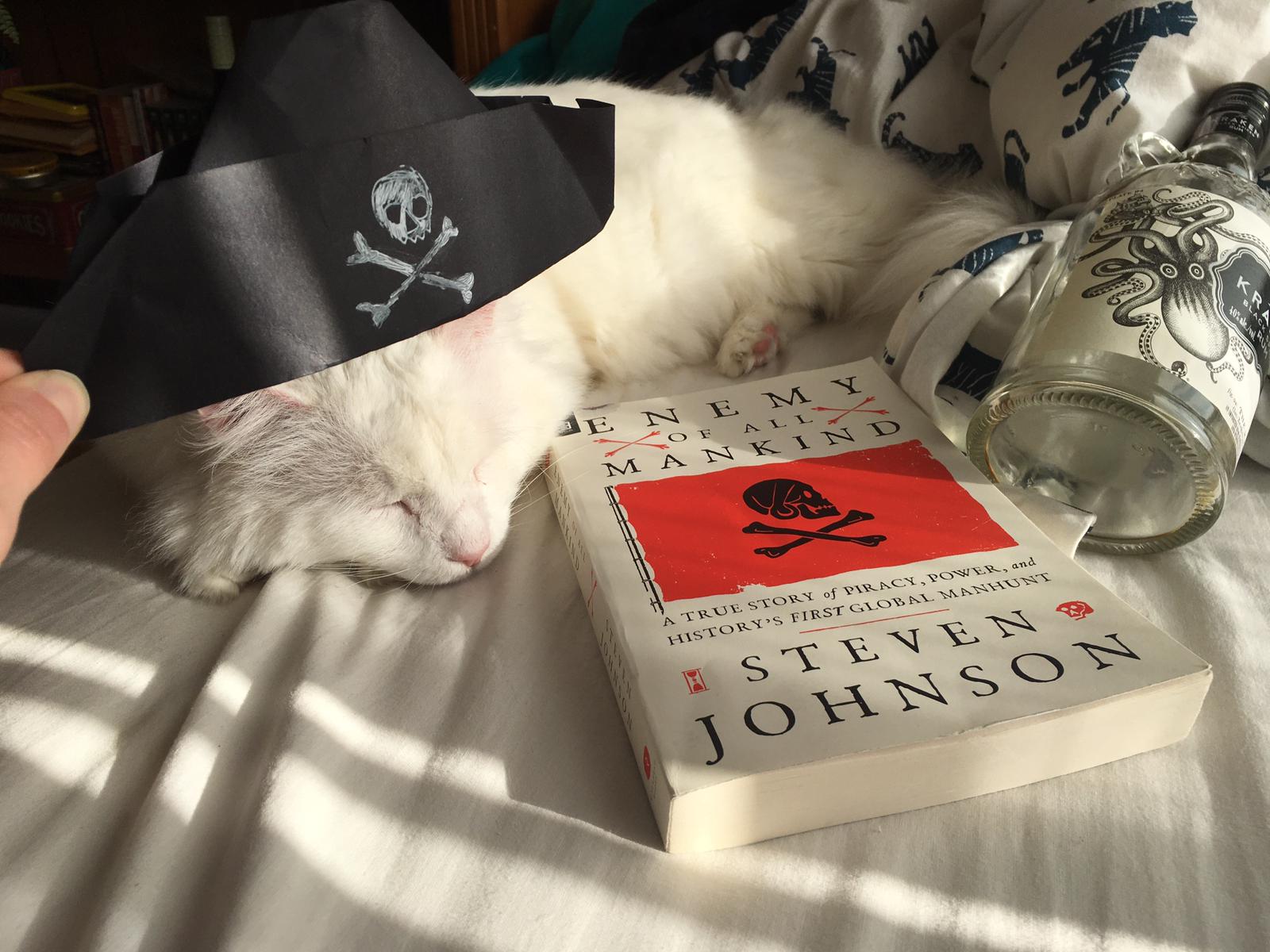 What We’re Reading in August

A peek inside the current reading lives of our Balmain bookshop staff.

Not to be smug, but thanks to a period like two years ago when I got my wisdom teeth removed and did nothing but sit in bed and watch all of Black Sails and then also obsessively research pirates: I already know a lot of solid pirate trivia.

This expertise includes, but is not limited to, knowledge of: the fact pirate bedtime was 8pm; the workplace injury insurance policies that were a norm among pirate crews; and the radically egalitarian and thoroughly democratic nature of pirate ships as self-governing communities, an avant-garde to revolutionary political ideas outlining more equitable systems of distributing wealth and power. So, some of what’s covered in Enemy of All Mankind was familiar ground.

The scope of Steven Johnson’s scholarship, however, extends quite a ways beyond pirate bedtime. In his freewheeling narrative history, Johnson illustrates the crucial significance of a single, specific act of piracy to the origins of modern-day geopolitics and global capitalism. In 1695, by freakish fluke, the crew of Captain Henry Every captured a ship belonging to the richest ruler in the world, Aurangzeb, the Grand Mughal of India. Their looting and brutal abuse of the ship’s passengers set in motion an international furore, from which emerged  the dynamics of foreign policy that would facilitate the cancerous ascendancy of the British Empire via the East India Company.

To borrow an image from Johnson’s own endnotes – the book’s structure is not unlike one of those crazy-walls with the red string that detectives are always making to catch serial killers.  He dips into various subjects – Mughal dynastic fueds, historic applications of terrorism, the structure of the East India Company – collaging together an illuminating tapestry of context for tracking the ramifications of Henry Every’s actions.

Johnson is an enthusiastic narrator, obviously very into the drama of the whole situation, which makes for engaging reading. Simultaneously, he’s mindful of not romanticising Every – his crew were, after all, a gang of violent, racist criminals, sexual predators and slave traders. He cultivates a bit of a vintage true-crime podcast flavour while being conscious of presenting pretty responsible historical reportage. As a reader, I appreciated that the word swashbuckling was soberly avoided throughout.

Sylvia Bozym is a bookseller at Roaring Stories Bookshop. She is the owner of the pirate hat-wearing cat. His name is Ernest.

I love reading books from the perspective of kids. For a spell, through that magical portal that literature opens up, I travel back to a time when I didn’t feel so coated with all the stagnant muck that adulthood seems to have accrued. That sad slime, a compote of cynicism and shames remembered and existential crises condensed. From a child’s eyes, things feel fresh, innocent, aglow with immanent and limitless opportunity.

This made me a perfectly feckless reader in the first few chapters of Sofie Laguna’s Infinite Splendours. This Miles Franklin-winning author ushers us into the bright and brimming world of Lawrence, a ten-year-old boy living with his mother and brother beneath a mountain in rural Victoria. In art, he is particularly gifted – his teacher is always gliding up behind him in class and saying “oh Lawrence” in a hushed tone, eyes bulging at some magnificent watercolour he has miracled up.

A lost father figure enters their lives: with gifts, worldly charm and the words of encouragement unsaid by a mother who cannot give the affection her boys crave. Then, a shattering betrayal, manifested as a shadow approaching from a bedroom door. Gifted Lawrence, responsible Lawrence, is lost forever. His unreconciled trauma becomes a lifelong stutter; and the horrors he endured don’t just malform him: they threaten to reproduce in him their monstrosity.

Infinite Splendours is not an easy book to read. For the most, it grips your guts with horrible unease and deep sadness. Told with compassion and beautiful prose, it insists upon keeping the reader sensitive to the silent and perverse agonies and passions Lawrence undergoes as he grows into an old man, living now alone beneath his mountain, whose ever-changing nature he reproduces in art. The distresses of the outhouse. The grace of light upon landscape. The little boy who moves in next door and he sees playing through a gap in the fence.

Provocative and devastating, this is my first (I know) Laguna book, and I can’t wait to go into her back catalogue. Infinite Splendours is forthcoming in October.

I’m also reading, starting to read, or piecemeal reading: Paul Kelly (did you catch our livestream with author Stuart Coupe?); The Golden Maze, our book of the month (did you catch that livestream?); Legend of a Suicide (why do I read so many depressing books); I’m Thinking of Ending Things (highly readable surreal little thriller) and … no that’s it. I’m no Bronwyn.

What I can’t wait to get into: Loner, Why Visit America and The Lotus Eaters. Juicy personal link behind that one. Stay tuned for next month’s What We’re Reading to find out why…

Kate Prendergast is a content strategist at Roaring Stories. She writes these blogs, mans the socials and wears an enormous bobbled beanie all through winter.

I’ve enjoyed reading Mikael Niemi’s To Cook A Bear (in store September 8). Set in northern Sweden in the mid-nineteenth century, it’s a detective story that explores ideas whilst also succeeding in an earthy portrayal of emotional yearning, as the pastor, Lars Levi Laestadius, and his assistant, Jussi, a Sami boy whom the pastor has taken in from a perilous situation, face a series of murders in their community. Whilst the pastor deciphers the landscape, both as detective and lover of wisdom, Jussi learns to read and marvels how the shapes of the alphabet are everywhere in the world. But he also feels gravity in realising that it would take more than a lifetime to read the books on a shelf – something that I and most people I know also often ponder.

We experience the story mainly from Jussi’s perspective and I particularly enjoyed the dance scene where the youth of the region enjoy release from their harsh seasonal lives – for maybe the first time in my life, I felt something of the wonder that folk music and dance must have produced in lives unused to entertainment. There was also a joyful feeling of wandering through lands near to the roof of the world in a time far away yet close. It’s a novel built around the story of the Good Samaritan and it’s this essence that helps the novel shine light and give a narrative that outlives spiritual ecstasy, mob violence and prejudice.

Tim Maloney is a bookseller at Roaring Stories bookshop. He is, like all our staff, exceptionally friendly.