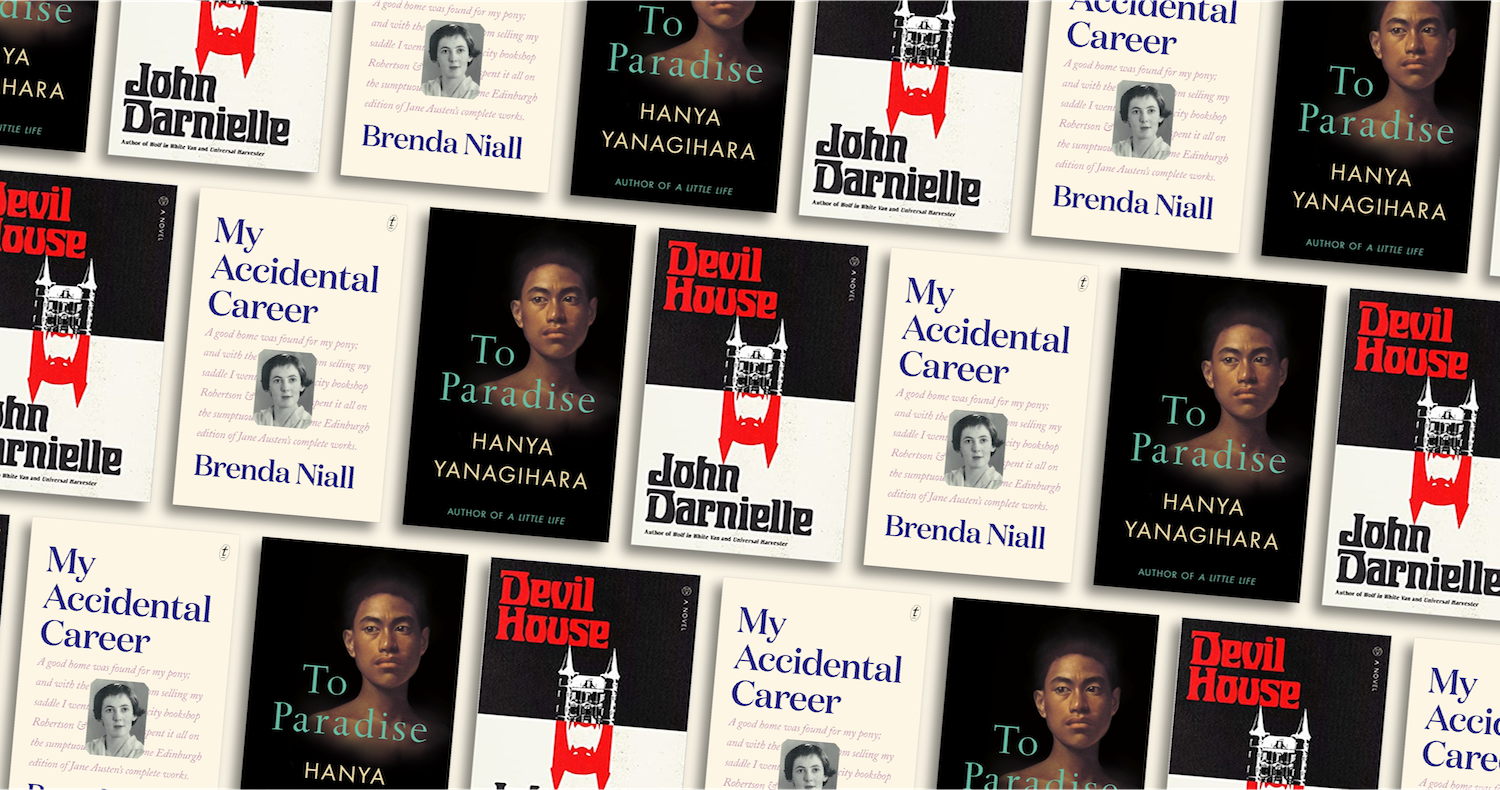 What We’re Reading in February

From an epic and emotional book that took three weeks to get through, to the latest novel from the frontman of American band The Mountain Goats: here’s what our Roaring Stories staff are reading this month.

Bron is reading…
To Paradise

I wasn’t going to read To Paradise. It was too thick (700+ pages!) and I’m still traumatised from my time with Hanya Yanagihara’s previous book, A Little Life! While I was obsessed with reading it at the time, and couldn’t put it down, it left me feeling that fictional trauma was a completely unnecessary device.

That’s the thing with Yanagihara’s books though. Hindsight and reflection may cause you to doubt and question what just happened, but all the while you’re in it, nothing else matters.

To Paradise took me the same way.

It is a book in three parts.

The first section is set in an alternate 1893 where America has divided into various countries and colonies. The Free States allow gay marriage, female suffrage and help slaves to escape from the South (although they don’t encourage them to stay in the Free States but move onto other regions). David’s grandfather has arranged a marriage for him with the very eligible and suitable, but much older, Charles. Meanwhile David falls in love with bad boy Edward.

Book two jumps one hundred years to 1993. This David is living in an AIDS affected New York with his older lover Charles. We then jump back in time to hear his father’s story, another David, living in Hawai’i. This David spent his entire life being enthralled by the very dubious charms of…you guessed it, Edward.

The reader (or at least this reader) spent the entire second section trying to work out what was going on with the whole David, Charles, Edward thing. Were they descendants or archetypes?

Book three is set in Zone Eight, in the former NYC, where the story jumps backwards and forwards fifty years to reveal how the brave new dystopian world of 2093 came to be. Starting at the 360 page mark in the book, part three comprises the bulk of the book.

In 2093 we see the world through young Charlie’s eyes, a survivor of the devastating 2070 virus. Her grandfather, Charles, became her primary caregiver after her father, David was arrested and taken away for being a dissident. Before he too was taken away, her grandfather arranged a marriage for her with a caring, sensitive man who would take care of her – Edward. But then another David turns up, threatening the quiet, carefully constructed life that Charlie had made for herself. Clearly, this section threw my archetype theory out the window. Or did it?

The David’s were the lynchpin of each piece. Not always likeable, they were often confused and suggestible. They struggled to find their place in the world, always searching for something more, something different. The Charles’ were the safe characters. Usually older, wiser, calm, mature and dependable. They were more certain of their place in the world, or at least just got on with the job at hand. The Edward’s represented change. They embodied risk, freedom, adventure or the possibility of a way out of one life into another.

There is obviously a whole lot more to the story than this. The title promises some kind of happiness or at least hope, yet the story centres itself around fractured societies, marginalised groups, disaffected individuals, loss of culture, climate change and the abuses of power.

Yanagihara’s books are an emotional read. Her characters experience both pain and pleasure, and they constantly toy with safety versus danger, tradition versus change. There is nothing particularly subtle about this, but golly, she knows how to take you along for the ride. Her rich, sumptuous language and intricate story-telling make you forget everything else.

I’m glad I read To Paradise, and do not begrudge the time that it took to read (3 weeks with just one book)! There was angst, conflict, death and sickness, but thankfully, no A Little Life-like trauma. Except for one small section in the second part, I was utterly engaged with the story and the storytelling from beginning to end. A compelling, compulsive conversation-starter.

I Only Listen to The Mountain Goats is a podcast, and was for a time edging on a true statement for me, too. John Darnielle is the frontman of this indie alternative rock band based in Durham, California – old friends used to just call him ‘Darnie’, always with an awed affection and fierce loyalty in their voices. For legions of misfits, his status is cult. He writes all his own songs, and the lyrics have a story-like quality; crafted synecdoches of outsiders, and the misunderstandings, violence and absurdity that dogs them, but also the sacred within them and within the communities that keep them alive. His novels, of which there are now three, inhabit the same kind of world as his songs, and evidence his mastery of the written word as well as the sung. I remember seeing him for the first time at the Perth Writers Festival, years ago, and for the second time at the den-like Devilles Pad, singing No Children and This Year and Jenny. Although (as with his most dogged fans) I like his old music better than his new, I can’t wait for him to come to Sydney again.

When I saw that Darnie was releasing a new fiction, I begged Dan (Roaring Stories’ boss) for an advance copy. It didn’t take much persuading – the book is already a bestseller in the US, and was reviewed by the New York Times. ‘John Darnielle lobs his novels in from the margins of American life,’ critic Dwight Garner wrote. ‘They’re lonely books, and they always get to me.’ Same.

Written in Darnielle’s unpretentious and ruminative style, not averse to taking risks, we follow Gage Chandler to a house in Milpitas, California, where an unsolved murder occurred when the property was a recently abandoned porn store. The crime involved kids, real estate, and the occult markings on the walls suggested Satanic sacrifice. Slowly, methodically, Chandler peels back the layers of this Devil House, walks into the invisible shadows, and attempts to parse the truth from the rumours. As we sink deeper, though, it becomes clear this no simple whodunit; no series of revelations as clues are found and deductions drawn. Instead, Chandler’s investigation turns recursively inward to examine his own methods of information-gathering and story-telling. How is it possible to represent a darkness that will always be – at least to an extent – unfathomable? How can any account not mutilate events, or do some form of unforgivable injustice to the alive or the dead? Some chapters into the book, we find ourselves in another decade, reading Chandler’s first true crime release, of a teacher who killed two students. He’d grown up knowing her as the ‘white witch’ in town legend. But there are always more horrors than are contained in the crime itself, and the myth that gets branded in lurid writing on history’s wall.

You always want your idols to do well in their new endeavours, and I am so glad and grateful that Darnie has done that and more with Devil House – a strange, circling, genre-bending and utterly compelling book.

Also reading (I’m halfway): My Accidental Career, by the historian, literary critic and award-winning biographer Brenda Niall. Niall is in her early nineties now, and has lived a challenging yet in many ways charmed life, managing to carve out a reputable position for herself as a writer despite the misogyny and chauvinism that was endemic to the era in which she began finding her way. Her age has far from blunted her wit and ability, and it is fascinating to follow her journey from living on a farm as a child, living as a neighbour to Menzies, to attending then working at universities, and then to her career as a biographer – which would produce portraits of the Boyd family, the Durack sisters, and Archbishop Daniel Mannix, a former neighbour of hers.

Following that? I’m reading the new series of HEAT, Giramondo Publishing’s revived literary magazine. A decade since its last issue went to print: it’s back.