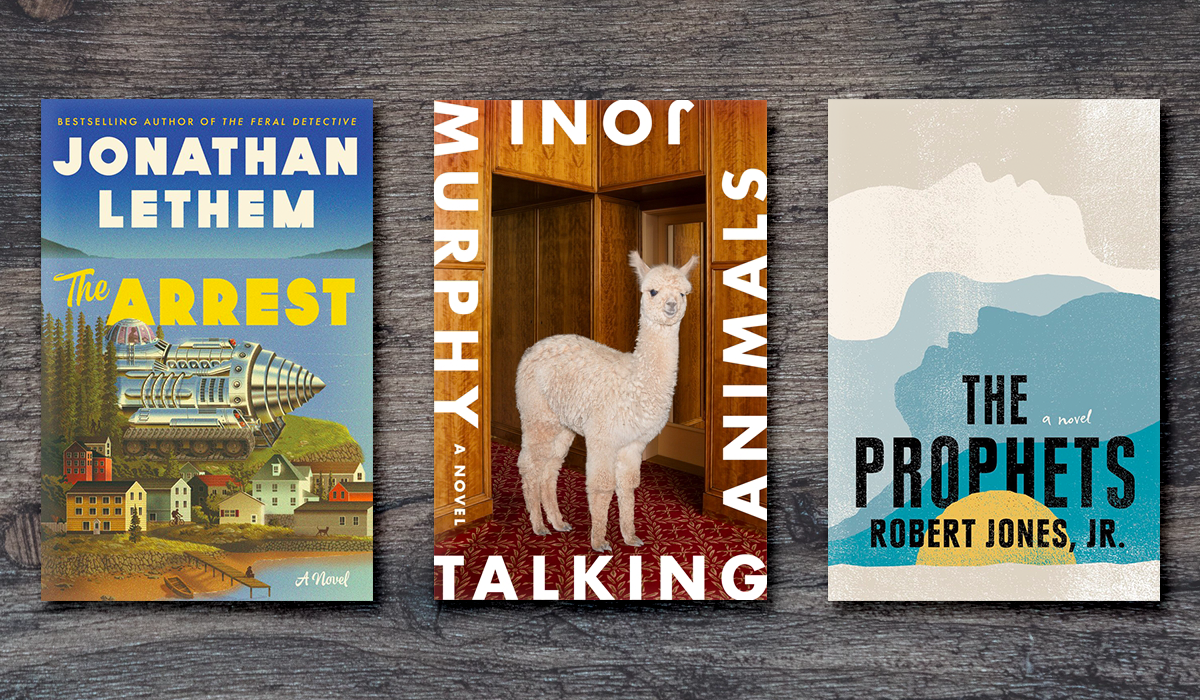 What We’re Reading in February

A speculative sci-fi where technology fails. A literary debut of queer love in an enslaved south. And an allegorical fiction featuring an alpaca by the name of Alfonzo. Here’s what our Balmain bookshop staff are reading this month.

Tim is reading…
The Arrest by Jonathan Letham

The Arrest has sent civilisation haywire. No electricity, no fuel and no guns. Into a small community on the coast of Maine arrives a man, Peter Todbaum, a Hollywood mogul, in a nuclear powered super-vehicle that looks like something out of The Thunderbirds. He’s travelled from Malibu to see his friend, Alexander Duplessis; ‘Journeyman’, a kind of post-apocalypse Uber Eats bike rider; and his sister, Maddie, who most definitely doesn’t want  to see Todbaum again. Todbaum brings news and good coffee but is what he says true? Is anything in the novel’s world true?

From the outset of this science fiction book by Jonathan Lethem, I was reminded of a scene in Crumb, a documentary on the cartoonist Robert Crumb, which shows a succession of illustrations of the same location moving from pristine wilderness to ugly industrial city. The Arrest has perhaps reversed and slowed that process but the same human follies remain. Todbaum’s super-vehicle reminded me of the giant sombrero in Richard Brautigan’s novel Sombrero Fallout: a sombrero falls from the sky and things start to happen. The same happens with the vehicle – it brings tension and conflict.

There are elements of Philip K Dick’s ability to play with our sense of reality here as well as Richard Powers’ ability to develop a deep story within a somewhat naive surface. I admit to being a little bewildered here and there in this novel – a bit like Journeyman – at all ‘the orchestrations’ going on, but now, a week or so after having finished it, I’m glad for the experience. It seems to me that just as Journeyman worked as a script doctor when he worked for Todbaum in Hollywood, that Jonathan Lethem here is offering his readers a novel with built-in, conscious flaws that in a deeper sense kickstarts the reader’s mind and orientates it in the direction of truth.

Nell is reading…
Talking Animals and The Memory Police

After finishing my thesis and critique of the medicalised gendered world, I felt the need to escape back into fiction. However, I still wanted to engage in larger critiques of society and politics. Joni Murphy’s Talking Animals was the perfect read. It follows Alfonzo, a disgruntled Alpaca finishing his own thesis, and his attempts to navigate a corrupt, animal-inhabited New York city. Talking Animals explores the rising tensions in this anthropomorphic city, the capitalist pressures the animals face, the corrupt creatures on the high ends of the social ladder, and the increasing rebellion of the exploited sea creatures.

This is a beautifully written novel. I especially enjoyed the opening chapter, where Murphy explains the foundation of her anthropomorphic city, detailing its brutal beginnings and growth – providing a poetic allegory for the foundations of our own cities. Murphy writes with rage – against capitalism, corruption, and exploitation; it felt as if my own thoughts on society were being properly articulated and explored. Despite the heavy subject matter of much of the book, Murphy still manages to make the book feel quite light and quirky, dotting puns throughout and buoying up the mood through Alfonzo’s relatable laments about power-hungry society and academia.

The other book I’ve been enjoying this month was Yōko Ogawa’s The Memory Police. I have found it to be very addictive. Ogawa is one of Japan’s up-and-coming novelists, and this book was recently translated into English. It takes place on an unnamed island, where memory police roam. In an Orwellian style, objects begin to disappear: boats, perfume, ribbons… However, some people are still able to recall these objects and those people begin to disappear as well. A young writer realises that her editor is in danger of disappearing, and decides to hide him within her house. While I have not yet finished this book, I have been thoroughly enjoying it and it’s exploration of government surveillance as well as its discussions on grief and loss for things we cannot even name.

Kate is reading…
The Prophets by Robert Jones Jr.

With early critical reviews invoking Toni Morrison, and the author himself going under the Twitter handle @SonofBaldwin, The Prophets was a book that promised a monumental literary debut for Robert Jones Jr. Set during slavery on a Mississippi plantation called ‘Empty’, it tells of the queer love and abiding bond shared between two young enslaved men, Isiah and Samual – and the betrayal that seeks to destroy them. From an early age, the two were regarded by plantation owner Paul as among his finest ‘stock’, and so placed apart from the others in a barn not far from the main house. Here, instead of picking cotton, they tend to the animals, haul bales of hay and – when they think no eyes are watching – find some small, aching, precious freedom in each others’ bodies. What Paul hopes is that the two become his prime ‘studs’. As with all his chattel, he forces enslaved men and women together in ‘the fucking place’, a dank shed used for the perverse business-like purpose to sustain his workers over generations. When Isiah and Samual defy his plan, another slave, Amos, sees an opportunity to expose them to his own complicated ends. And another – a white man – sees selfish gain in the lovers’ bodies, too.

Calling forth a multitude of voices – some from the land from which they were brutally taken, some of the plantation (white, black and in-between), and some which interject as an ancient chorus – The Prophets is an ambitious, rebellious and virtuosic neo-slavery novel, written with sometimes dizzying lyricism. Elaborately and often, it blurs the edges of the lived and spiritual worlds. Some characters, like the resilient Maggie, are receptive to ancestral presences, which dart into the periphery like flickers of night. Others, like Amos, try to earn favour from by adopting the white man’s religion.

Perhaps it is because I am too overfed on the storytelling techniques of old white men, but I found The Prophets a read which demanded (deservedly) my complete attention. Brimming with figurative language and an idiosyncratic prose, it is a subversive story of love and survival in a time and place which negated all humanity of a stolen people – the legacy of violence and trauma which is undeniable today. To read a review of this book by a queer black writer, I recommend Danez Smith’s in the NYTimes.