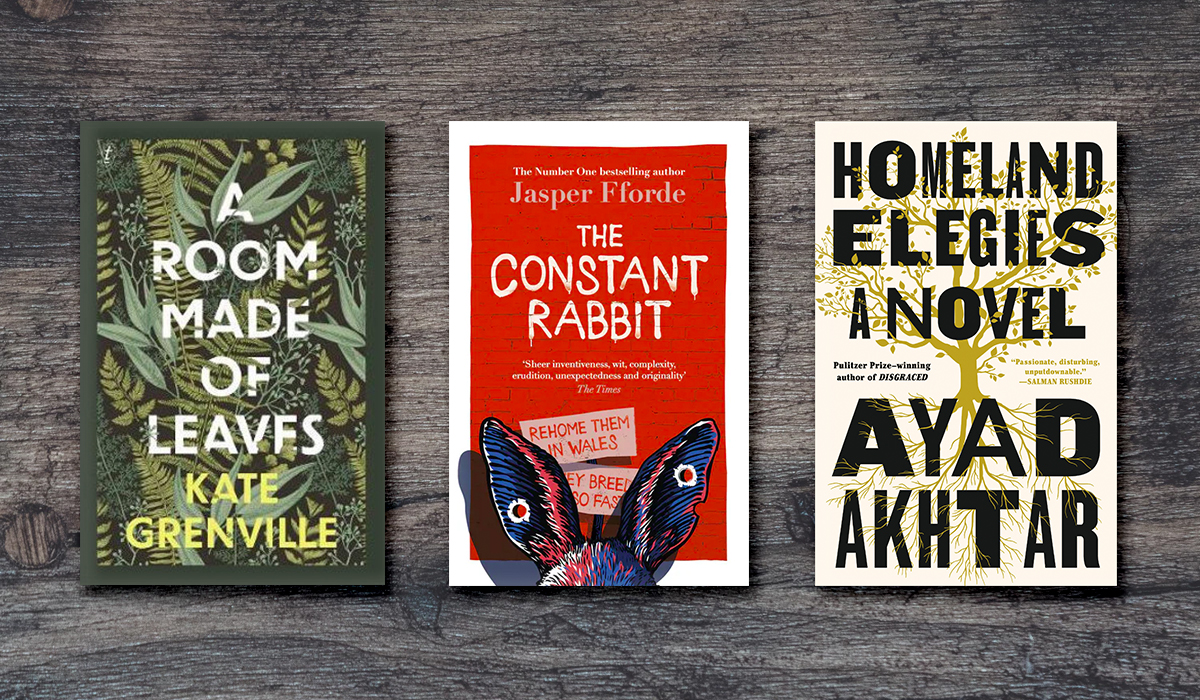 A peek inside the current reading lives of Roaring Stories’ staff.

Kate Grenville’s new novel A Room Made of Leaves is both entertaining and thought-provoking. I found it most exhilarating in those moments when she describes the environment, and felt drawn towards the world that she has created.

In her depiction of wilderness and pasture, the memory of home dances with protagonist Elizabeth Macarthur’s hope for the future. When Elizabeth leaves the familiar paths of colonial Sydney and ventures into the bush sloping towards the harbour, I felt as if I was riding the Big Dipper some centuries later on those same shores, with native flora and fauna rendered in such vivid texture and movement that the immediacy of this wilderness almost came as a shock – a welcoming shock as if the backdrop to a stage had fallen.

At another moment, when Mrs Macarthur sits by a quiet creek at Parramatta and lets the air and foliage settle around her, this novel – which in this age of agitation reads a little like a Georgian-era blog written by a witness/insider to a plot for colonial ascendency – achieves a sense of time and place entirely its own.

Grenville’s feel for the natural world seems to open up dimensions of understanding to examine prominent characters and society, ideas of home and family, distance and memory, in refreshing ways. Parallel to the emerging pastoral economy and the politics of the colony is the undertow of polite society and those survival strategies issuing from an unequal marriage. In this fictional memoir, Elizabeth Macarthur talks with us of the imperatives of gaining and achieving a sense of selfhood in a society determined to deny such a thing, and reminds us it is as urgent and as possible a project as ever.

This month I have been reading eight books.

I started The Parisian by Isabella Hammad the week before the world went pear-shaped with Covid-19. I was really enjoying it, but during lockdown I needed books that comforted me. Then a whole stack of new releases got in the way and I’ve only just got back into it. I’d forgotten how lovely is the writing and how absorbing is Midhat’s story. I’m learning so much about the Levant region circa WWI/WWII as I go. It’s hard to believe this historically rich, self-assured story is a debut.

I just finished Ann Patchett’s The Dutch House last week. It filled me with delight. Patchett writes such wonderful, character-driven stories full of heart and wisdom. This is the story about the kind of stepmother she doesn’t want to be.

Humankind by Rutger Bregman is a non-fiction title that is a timely reminder that human beings generally err on the side of kindness. I’m enjoying the discussion surrounding many of the famous studies, now seriously challenged, in the field of psychology.

Homeland Elegies: A Novel by Ayad Akhtar is an extraordinary blend of fact and fiction. I have no idea where this is going, but I’m loving the ride so far! It’s a September new release.

The Fire This Time edited by Jesmyn Ward is a collection of essays and poems about the issue of race in America. It feels like the right time to be finally reading this book.

I’m a bit of a Katherine Mansfield fan. Many years ago I read and loved one of her short stories anthologies. I now have her entire collection together in one book. The pleasure of being able to dip into it and read one or two stories at a time is a bit like eating a double choc ice-cream in a choc-coated cone! Delicious at every turn.

The Plague by Albert Camus is another one of my timely reads this month. It’s an orange Popular Penguin edition, which means it’s the perfect size for tucking into my coat pocket and taking on a walk to my favourite café. Clearly the term ‘unprecedented’ to describe our current COVID situation is inaccurate. In 1947 Camus was already all over it!

And, in case you were wondering, I’m still plugging away at War and Peace, one chapter at a time.

As I hadn’t read any promotional material for The Constant Rabbit – reviews, summaries, not even the backcover blurb – it took me about a chapter to catch on that Fforde was using actual rabbits as characters in his book, and not just being weirdly laboured with a theme of figurative speech.

An absurd and superbly eccentric satire, this book imagines a world where, sometime in the fifties, an inexplicable event occurred wherein a small number of rabbits (plus a badger, an elephant, some foxes and a few bees) anthropomorphised to take on the physique and character resembling that of humans. While welcomed into society at first, the rapid breeding and spread of the buns in particular caused consternation and then outright hostility in the epicentre of the event, the United Kingdom. With the rise of far-right UKARP (United Kingdom Against Rabbits Party), and the self-preserving complicity of the public, the cotton-tailed and overwhelmingly peaceful minority population turns into chimerical scourge and politically useful scapegoat. Conspiracy theories fester, taskforces work to control and contain the flopsies, and – in Peter Knox’s small parish – villagers wring their hands when a new family hops into their tidy-hedged town. Knox – a public servant for the taskforce who is essentially good-hearted, but primarily cowardly – must decide where his heart and morals lie. And quite possibly his sexuality – he has a thing for the very shapely Constance Rabbit, Bit weird, but it’s easier to just go along with it.

The book’s parallel’s to an increasingly insular and intolerant post-Brexit Britain are pointed. This could’ve come across as a little too clever if the premise wasn’t so absurd and the wit so offbeat. Fforde is a brilliantly engaging writer, who has delivered in The Constant Rabbit a wildly imaginative yet seriously relevant tale. All in all, a thumping good read.

Another book polished off this past month: The Big O by Patrick Skene. I have never watched a game of rugby league, nor could I fathom its aggressive art if I watched one now (probably), but this story of Olsen Filipaina, a trailblazer for the Pacific nations in the sport, is engrossing and often heartbreaking. Look out for an interview with both biographer and subject on the blog soon. And don’t forget: Father’s Day isn’t that far away.