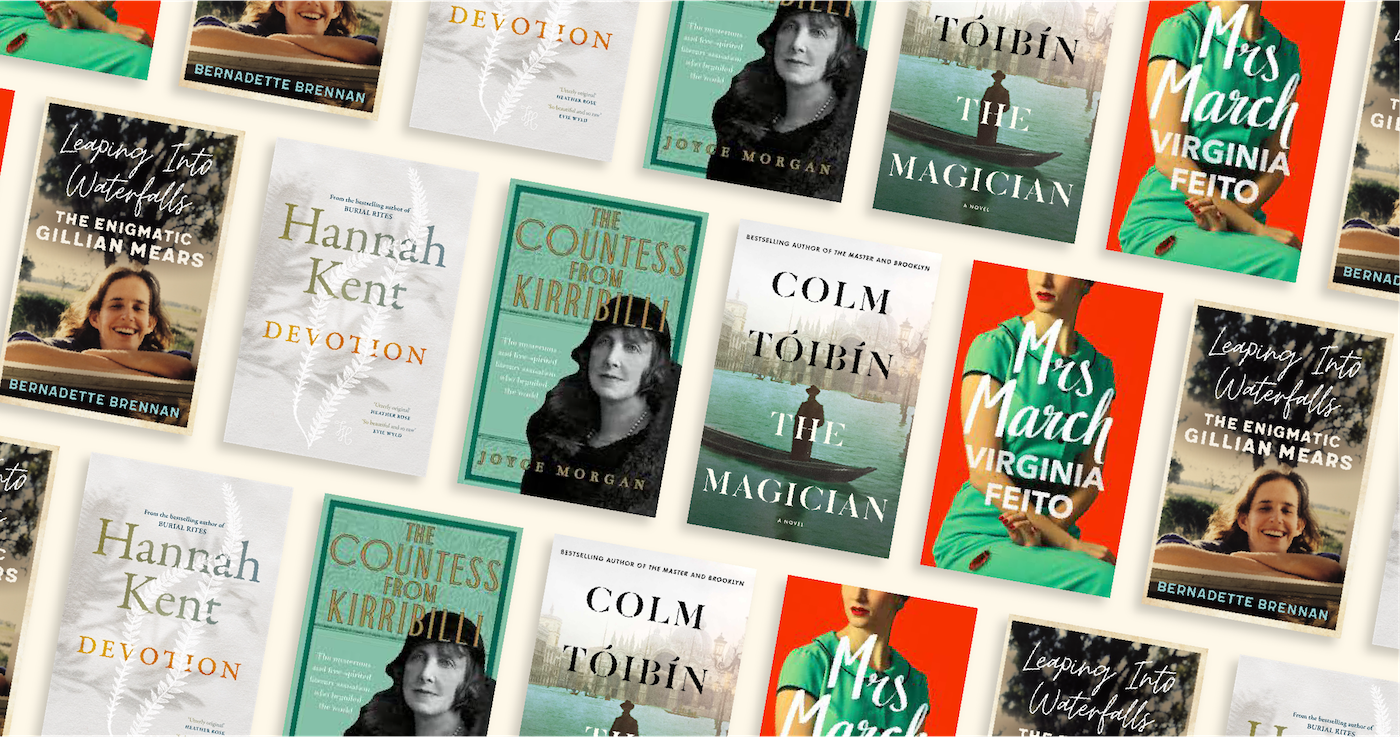 What We’re Reading in November

From Roaring Stories book of the month, to a biography of a bestselling writer who had an affair with H.G. Wells, to what could be Bron’s favourite book this year. Here’s what our Balmain bookshop staff are reading this month.

I’ve been slinking and sidling my way through these unusually rainy November weeks, making mutually baleful eye contact with the hanging plastic skeletons and other forlorn Halloween accoutrements; edging gingerly across slick carpets of jacaranda flowers, muttering darkly to the bees that they ought to go home (‘someone might step on you, someone might fall and bodyslam you–’)

Self-medicating for the gloomy weather has involved huffing on jasmine hedges (even better smelling when damp) and reading Hannah Kent’s Devotion, which is so suffused with golden-hour light and rhapsody that I have been using it as a sunlamp to warm my tired old bones.

Kent’s third novel is set among a group of the Old Lutherans who emigrated from Prussia to South Australia in the 1800s, claiming land belonging to the Peramangk people to establish German-speaking towns around Adelaide. Our narrator Hanne, fitting awkwardly into the scripts for womanhood and worship dictated by her community, has always found a more genuine sense of God in her relationship to nature. Throughout Devotion, she finds also this more genuine sense of transcendence falling in love with her friend Thea.

Kent notes in her introduction that Devotion is something of a departure from her previous work, in its looser relationship to historical record and in its concern less with shadows than with light. This is very palpable; Devotion, both in its narrative arc and the rapturous quality of its prose throws itself into a sense of illumination, incandescence, exultation. Kent’s writing is positively radiant with Hanne’s wonder at a new kind of grace found through queer love and connection with the Australian landscape.

It was a lot, but it was very beautiful.

I’m currently rereading Patricia Lockwood’s poetry book Motherland Fatherland Homelandsexuals, and am about to start Zen Cho’s Black Water Sister, which I think is a Malaysian-set fantasy novel about gods, gangsters and being haunted by your troublemaking grandma.

Bron is reading…
The Countess From Kirribilli, Leaping Into Waterfalls, Mrs March and The Magician

I have read so many fabulous books since last I wrote, it’s hard to know where to start! For now I will limit myself to two non-fiction and two fiction titles, but if you’d like to see the rest, pop into the shop and check out our Staff Favourites shelf to see the rest.

The Countess From Kirribilli by Joyce Morgan is an engaging biography about Elizabeth von Armin, famous for her German Garden and Enchanted April. She was an international bestselling writer, who was born in Sydney in 1866, but went on to marry a Prussian Count, an English Earl and have an affair with a young H. G. Wells. Part of the pleasure found in this biography is the inclusion of many personal details surrounding the creation of each of her novels.

Elizabeth wrote 21 books throughout her lifetime. Each and every one was heavily influenced by what was going on her in her life at the time. Curiously, for someone so protective of her privacy, a huge amount of her personal life was made visible through these stories. The names were changed, but many of the incidents and certainly, the emotional truths behind the story, were often very, very real.

Jump forward a century to Gillian Mears and her biography, Leaping Into Waterfalls by Bernadette Brennan.

Mears left an extraordinary amount of archival information behind after she died in 2016 – a biographer’s dream – except it has taken Brennan three years to go through it all and to interview her family, friends and lovers.

I’m only halfway through her extraordinary life story, but Brennan’s respectful, yet thorough and revealing research is making for an exceptional journey through the literary world of 1980’s & 90’s Australia.

Virginia Feito’s debut book, Mrs March is destined to be one of my best reads of 2021.

It begins with dinner party preparations à la Mrs Dalloway, where we see Mrs March wandering the streets of New York, organising caterers, flowers, decorations and staff. The dinner party is in honour of her husband, George March and his new novel.

This one remark sends Mrs March down a rabbit hole, where the reader is left unsure what to believe. Is she going mad? Or is she right to suspect that Mr March has ulterior motives? Is she being manipulated by those around her? Or is she an unreliable narrator? Completely deranged or a victim of gaslighting?

The build is delicious. Highly recommended for those who love a story which gets under your skin and completely creeps you out.

I did not always like Colm Tóibin’s The Magician as much as I do now. It is a book that grows on you as time goes by.

Thomas Mann had a lot of secrets and it was not easy for Tóibin to find a way in that allowed the reader in too. I felt like I was on the outside looking in through a rather opaque window! However, Tóibin did show us Mann through the eyes of his family and friends, and like me, they often found him wanting. Thomas Mann’s attention was elsewhere for most of his life. Like many writers, it often seemed like he was an observer of life rather than an actively engaged participant.

Thomas and his siblings exhibited a dazzling array of jealousies, competitiveness and family bickering. The children of Thomas also went on to display an extraordinary array of issues and problems. In fact, it is the letter that youngest son, Michael writes to his father on the death of the oldest brother, Klaus in 1949, that is the zinger at the heart of this novel. It’s a letter full of classic sibling rivalry and the bitterness of perceived parental failures.

Tóibin’s earlier novel, The Master was written with the idea that anyone could pick it up and enjoy it without having read any of Henry James’ novels. I felt the same sense of being gently held throughout The Magician. Knowledge of Mann’s novels may have added to the reading experience, but not knowing them didn’t take away anything. I never felt like I was playing catch up or left in the dark.

In the end, The Magician was an epic family tale, spanning two world wars and continents. A book to savour slowly to let it work its magic.