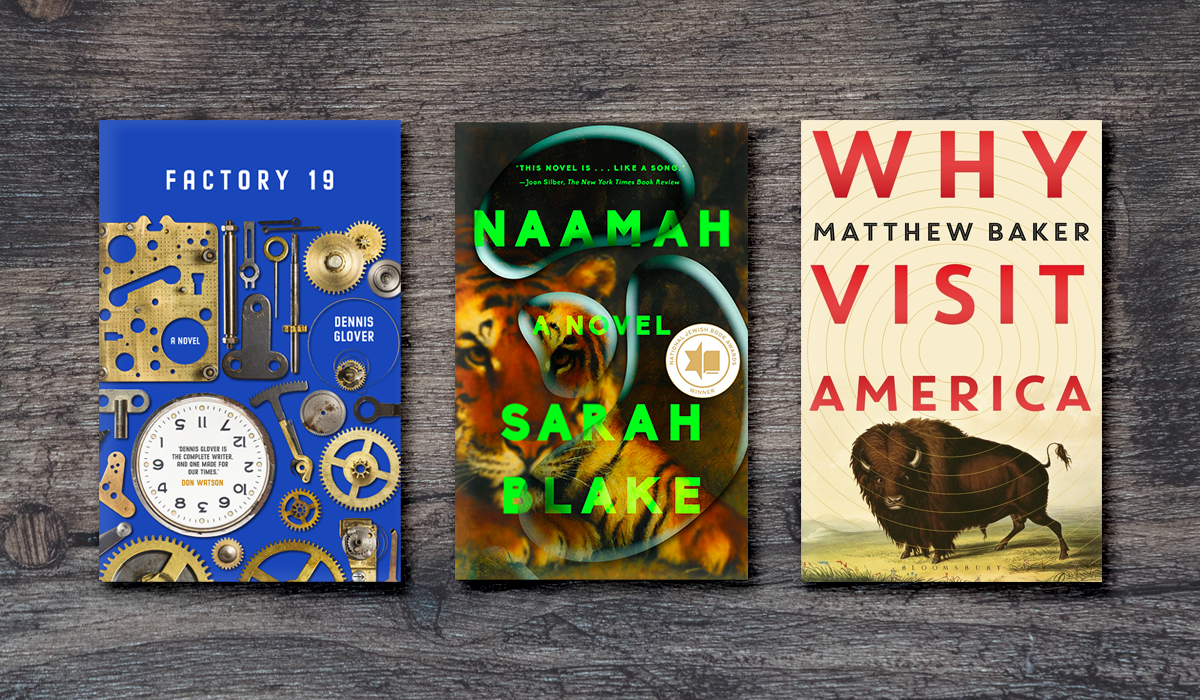 What We’re Reading in November

A peek inside the current reading lives of our Balmain bookshop staff.

The gift in Dennis Glover’s Factory 19 has two components. First, it’s an inventive step away from the all-pervasive digitalisation of society. In a narrative mostly devoid of modern technology, the reader enjoys a multi-layered adventure in an Australia where cultures and communities that have taken centuries to grow have been decimated by the consequences of smart technology taking over minds and taking jobs.

Second, Glover manages a complex yet humorous examination of the role that nostalgia plays in our lives. Factory 19, set in a futuristic Hobart, represents an attempt to return to the year 1948, just before computers became part of everyday life. It’s a micro-society built on its founders’ nostalgia. Still, as it attempts to free people from the digital present and provide full employment, it runs the risk in enforcing nostalgia of becoming a repressive regime.

In his characters’ response to this oppressive, if well-meaning state of affairs, Glover’s writing is fascinating. There were moments where the characters’ interactions and Factory 19’s labyrinthian character reminded me of one of my favourite novels, Kazuo Ishiguro’s The Unconsoled. Workers’ militancy, revolution as theatre, jazz and fashion all play their part in keeping authority guessing as Glover’s characters seek to rise from being words on paper. This gives the humour in the book liberating energy, which I found refreshing.

Tim Maloney is a bookseller at Roaring Stories.

Just a quick one from me this time round, as I’ve been a busy ole bee with moving house (yet again!) this month.

(The occupational hazards of being a bookseller are no joke; I have no idea what the actual number of books in my hoard is, but this weekend I learned, from carrying box after box down the stairs, that I’ve accumulated at least one hundred and twenty kilograms of them.)

Recently, I seem to have struck a rich vein of literature exploring queerness and femininity by way of TIGERS, and I’m very here for it. There was C Pam Zhang’s How Much of These Hills is Gold a while back (you can read my rrrave review here), K-Ming Chang’s Bestiary (published in early November), and I’ve just finished Sarah Blake’s Naamah. I assume that gives us quorum to call this a genre, and gee whiz it’s a good one.

Naamah was fantastic; beautifully written and also bonkers. I loved it. Truly life-giving stuff. Married to Noah (of Noah’s Ark fame), Naamah is given only passing mention in the Bible. In Blake’s novel, however, she unreservedly inhabits her story; drawn with all the vagaries of her grief, desire and doubt as she lives through the calculated drowning of the world.

Blake’s writing is both gorgeously hallucinatory (e.g. Naamah’s travels underwater with a strident and loving cockatoo, arguing about whom is dreaming whom; conversations with God as a moulting vulture) and at other times vividly earthy – or, as one blurb describes it, “blasphemous and carnal,” ha. Blake is indeed very interested in bodies: in the context of sex, but also in the raw reality of physical survival; the muck and blood involved in keeping a floating menagerie of animals alive for months on end; the muck and blood, physical and metaphorical, involved with existing as woman, whatever that even means. (Naamah’s cockatoo friend, for one, has a lot of questions about it.)

Next up is Joni Murphy’s Talking Animals, which I am just so excited to start. It has, objectively, the best cover in the world. I’m hoping it’ll be the satirical alpaca-filled song of my own soul.

Sylvia Bozym is a bookseller at Roaring Stories.

Kate is reading…
Why Visit America

So I will admit (because I am as honest as I am obtuse): when I saw Why Visit America in the new release section of Roaring Stories, I thought it was some travel guide slash apologia that had been published at a very ill-advised moment. This supposition, unreflected upon, persisted for months. Equally persistent was my admiration for the cover of Matthew Baker’s book, which features that shaggy beast of the prehistoric plains, the bison. The illustration shows an upper body of royal hairy proportions, a tiny tiny waist, dainty hooves and great pendulous balls. (Bison are, I believe, the animal kingdom’s equivalent of a motorbike-riding bodybuilder who is also a furry and who, perhaps, dabbles in paganism.)

Finally, I clocked that the book was not in fact filed in the nonfiction section of the bookshop, but in fiction. From this shelf of dreams, the bison’s small eyes bore into me. They contained a mystery, a promise, a threat, a possible ‘come hither’. So I hithered over, and picked up the book.

The bison’s call was true. Why Visit America is a remarkable work of Black Mirror-esque allegory, presenting upside down, inverted and shattered versions of America that is or could be. Through the short story form, it traces with a wildly imaginative energy and excellent prose the strange crenellations of a nation’s increasingly fractured psyche – plotting the paranoid fears and brazen ideals of corporate, institutional and county America to their uneasy conclusions. There is the story of a mother grappling with her son’s wish to be free of his body and “transition” into the cloud. There is the story of a futuristic prison-industrial system, in which criminals ‘do time’ not behind bars, but by having years of their wiped wiped from their memory. There is the story of a society in which suicide past a certain age is mandatory, ritualised and celebrated to mitigate the costs of population growth.

Not every tale is riveting (some are a little silly) but on the whole, I loved this book for its bold, speculative creativity, and the questions it provokes. It reminded me a little of David Foster Wallace’s Oblivions Stories – though the way DFW drives his satirical jackhammer into his subjects is something none can quite match.
Other titles quaffed this final month of spring, along with my dose of 1L of Agrum (no sugar) per day, are Life After Truth (watch our livestream with author Ceridwen Dovey here); Educated, the international bestseller about a Morman woman’s painful liberation from her abusive radicalist family; Lucky’s, a debut novel hit about a Greek Australian restaurant franchise (sample a bite here); and Exciting Times, which Sylvia adored and reviewed in June. Oh, and I also have been dipping in and out of Lynch on Lynch, a long-long-longform Q&A with the auteur. Did you know he also paints (like a demon child) and sings (with a voice uncannily like Kermit)? Also: that he loves mounds of dirt.

Kate Prendergast does the socials and digital content for Roaring Stories.