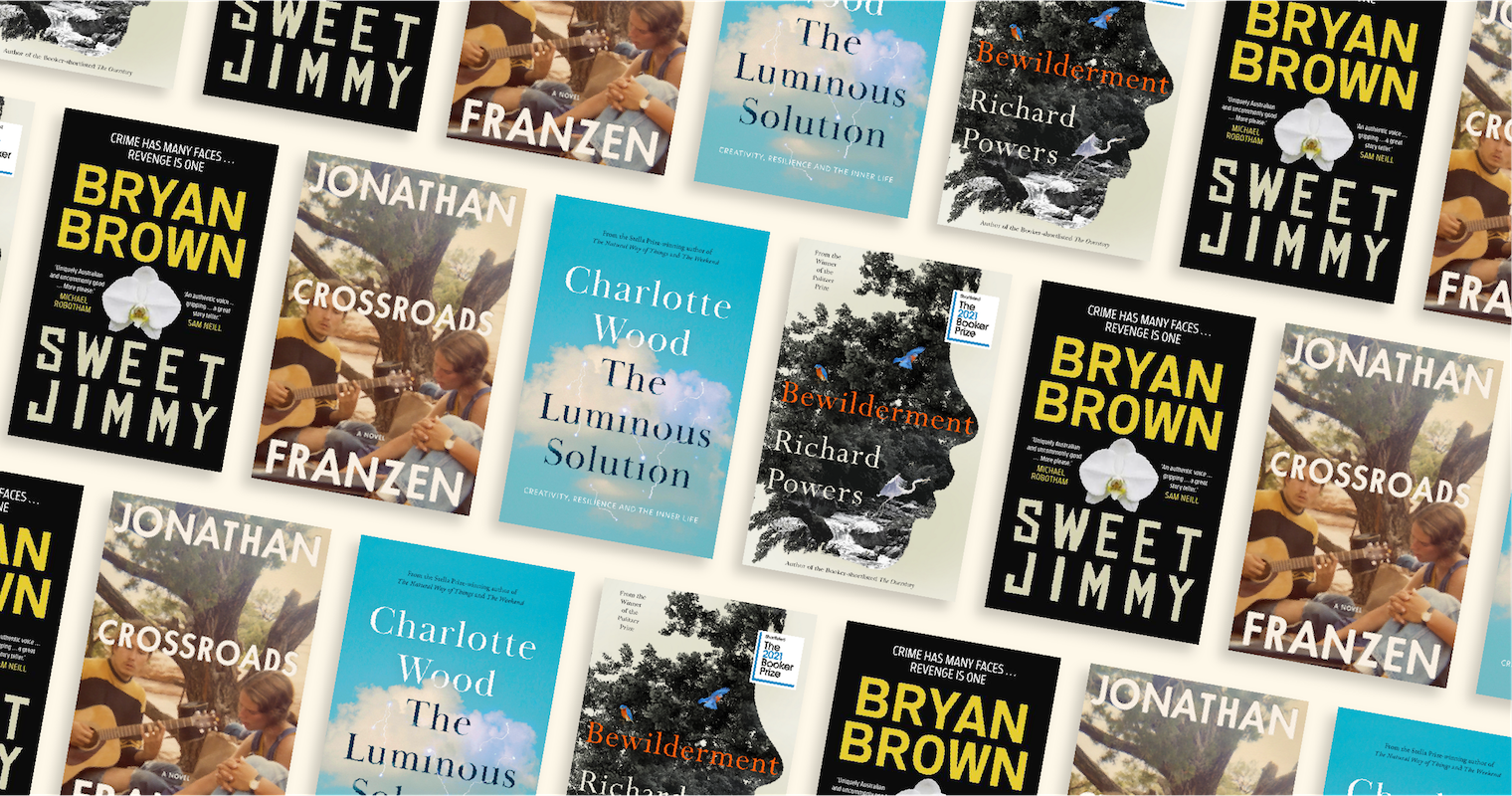 What We’re Reading in October

From Jonathan Franzen’s latest, to local author Bryan Brown’s debut collection, to Charlotte Wood’s insights into the creative process. Here’s what our Balmain bookshop staff are reading this month.

In this lockdown, I’ve tried to keep to one book at a time. For the most part, that’s been successful. In this day and age, with so many media distractions, I’ve found this a refreshing experience, a reminder of how important reading time is and that reading isn’t everything. I’ve worked my way through a few books whilst restructuring my days around the procedures involved in COVID payments and the odd ZOOM catch-up with friends, and have just finished Jonathan Franzen’s novel Crossroads (the first in a trilogy).

I am in awe at the ease with which he involves his readers in the world he’s created. There’s a sense of heightened reality and an eloquence that I can only dream of. I loved all the heart-to-heart moments between his characters in moments where everything is on an edge. The way that his characters communicate makes his writing more than enjoyable. I think there’s a good guide to living in this book and that it’s important. There’s theology and family breakdown and perhaps the best sentence on what being drunk is all about that I’ve read in a long while. These are characters that wonder anxiously about their motivations and actions, and their internal lives are rather interesting and so well observed.

I’ve also read Bryan Brown’s collection of short stories Sweet Jimmy. It struck me as I read these stories that they’re a creative response to the realities of urban life as presented to us on the news and in the papers; where we are confronted with gang wars and deadly feuds between criminal families; assassinations on city streets; stabbings in teenage gatherings and house parties that get out of hand; drug lords who continue to manufacture and import obscene amounts of drugs.

This urban crime, out of control as it seems in depthless ‘news flashes’, Brown turns into stories that are dark yet occasionally humorous, and with a moral core that is fascinating and magnetic. He gives this collection twists and turns, and a sense of local place that returns to us what crime steals. There’s raw, frenetic energy here, empathy for the experience of mourning and an awareness that the paths of criminality are complicated.

I’ve also read Francis Spufford’s Light Perpetual. Spufford is an incredible writer who writes just on the edge of my reading ability so I read his books as lessons in a way. In this alternate reality where children killed in a V2 rocket explosion in late WW2 survive, the storyline involving a newspaper printer’s experience of the Wapping strike was my favourite. His writing on the amazing way a drum n bass track can be assembled on a laptop utilising decades-old samples makes me want to revisit and revise some songs I created on Garageband. I like how authors create sounds on a quiet page.

I’m also reading Kurt Andersen’s Evil Geniuses: The Unmaking of America, which looks at the long campaign that the American Right has staged to keep the money flowing upwards and how they’ve been too successful at this for their own and their country’s good. This book is a useful companion to Nancy MacLean’s Democracy in Chains, Jane Mayer’s Dark Money, Naomi Klein’s The Shock Doctrine and Alex Carey’s Taking the Risk Out of Democracy.

Finally, Quentin Tarantino’s novelisation of his film Once Upon a Time in Hollywood was a revelation. He managed to get me interested in the making of a television western, which I would have thought impossible beforehand.

There are few things more reliable than a recommendation from our bookseller Bron. Every time she mentions a book in glowing terms, I think, oh no (but oh YES!) – another one I must read.

The latest is Bewilderment, a Richard Powers’ novel shortlisted for this year’s Booker Prize. Tenderly, sure-footedly, it tells the story of Leo, a father and astrobiologist, struggling to raise his young son Robin – a bright, sensitive and emotionally volatile boy diagnosed with dozens of disorders by doctors over the years – after the death of his warrior campaigner and eco-activist wife in a car crash. Growing up in a world in which every day peels back more of the insanity, violence and corruption required to support mankind’s ‘progress project’ is a traumatising experience for Robin. His sense of wonder at the natural world is equal to his sense of rage and despair when he learns of the monstrous and intentional acts which are destroying it. A video of the inside of an abattoir will have him banging his head against his bedroom wall. You can read his reactions as emotionally excessive or entirely proportionate to the reality of what is to come.

Father and son manage to escape through visiting faraway, hypothetical planets that Leo conceptualises as part of his job – creating models of other worlds where life might possibly emerge. And, for a while, Robin is offered another kind of escape from his agonised internal turmoil through participating as a test subject in a new, radical clinical trial, in which his moods are mapped and matched against another’s. The lifeboat on which Robin and Leo is such a fragile craft however. The government of the day (clearly Trumpian) is rudely, brutally dismissive of any mindset or enterprise that doesn’t put profit first. Readers are made to feel so prescient of just how brave and isolated the pair are; hope seems like such a fragile, impossible miracle.

Bewilderment is not so much a ‘bleeding heart’ novel (though conservative readers will no doubt read it as such), but a novel with heart, one that beats painfully and counterpoint to what sometimes feels like the death march of earth’s species. This is a surprisingly affecting novel, and singular too in its frequent and elegant use of scientific language; threading in terms and concepts usually reserved for sci fi and comparatively scarce in the rarefied strata of literary fiction.

Another book that has been inspiring and consoling me has been Charlotte Wood’s The Luminous Solution. This is a work about the creative process – its magic, mysteries, myths and theories – for anyone who is or wants to be creative. The Stella Prize-winner is very skilled at articulating what readers may have only sensed or intuited, and is highly convincing in arguing for a more collaborative and courageous place for creativity in culture, workplaces and individual lives.

Other readings of late: Andy Jackon’s Human Looking, a compassionate book of poetry on the varied experiences of disability; Shuggie Bain, which won the Booker Prize last year; and Fidelity, a bestselling Italian novel in translation, soon to become a Netflix series.