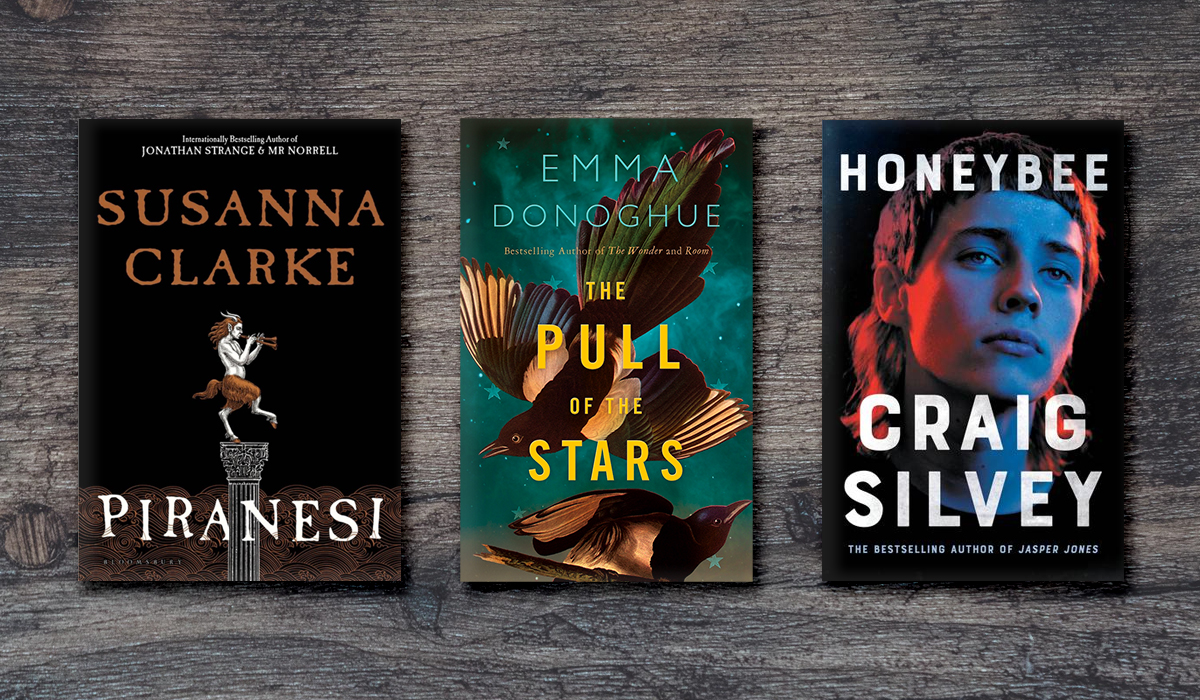 What We’re Reading in October

Plague lit, magical realism with a pardonable deficit in prancing fauns, and long-awaited new fiction from Craig Silvey. Here’s what our Balmain bookshop staff are reading this month.

My review is, in short: *chef’s kiss*

If pressed to elaborate: Chef’s kiss with a sole grievance, that grievance being this book contained less goatmen than the cover initially led me to believe it would. Because it performed well in other categories though, I can forgive this.

The aesthetics of the story alone would be enough to carry the thing. Our protagonist, Piranesi, lives in the House; a byzantine, quasi-animate labyrinth. Tides wash down its staircases and seabirds nest in its halls; its cavernous chambers are filled with countless marble statues, every one of them unique. Piranesi spends his days wandering through this coral-grown, rain-weathered dreamscape, dedicated to observing and documenting the wonders of the world. He is completely alone – apart from the Other, with whom he meets on Tuesdays and Fridays.

Piece by piece, the novel delicately unfolds its mysteries; of the nature of the House, of Piranesi himself and how he came to be there – and why he carries the name of a classical Italian architect famous for his elaborate drawings of imaginary prisons, when he is fairly sure it’s not his real one. Clarke weaves allegory and allusion like this to craft a rich and complex work of philosophical literary fiction, meditating on metaphysics, belief and solitude.

Clarke’s renowned Jonathan Strange and Mr Norrell was glorious in all its footnoted expansiveness; Piranesi sits at the other end, distilled and perfect and gleaming like a lovely shard of seaglass. What a glinting pearrrrl of a novel! Another big chef’s kiss.

Other highlights of the month: Robyn Wall Kimmerer’s Braiding Sweetgrass, a fascinating work which brings together Indigenous and westerns scientific knowledges to a wide-ranging discussion of ecology and philosophy. Kimmerer is a biologist and a member of Oklahoma’s Potawotomi Nation, as well as a poet and artist; her writing is beautiful, discerning and informed. If you enjoyed Tyson Yunkaporta’s Sand Talk, this would be a great accompaniment; it’s a bit more biographic and eclectic, in a way that makes for very engaging (but also soothing) reading.

I’ve just started Helen Macdonald’s essay collection Vesper Flights, which I think  will be in a similar lyrical and insightful memoir/nature-writing vein. I’ve been wildly excited to get my hands on it; her earlier H is for Hawk is one of my favourite books. (The curiosity it piqued in me about falconry would eventually result in my asking a nice man in Mongolia giving an eagle hunting demonstration whether I could sniff said eagle.)

This month I’ve also been bravely making my way through Economics: The User’s Guide by Ha-Joon Chang. This one has elicited some horrified looks when I’ve mentioned it to people, but it’s actually been a really accessible and interesting ride – for example, one of the chapters is called ‘Boris’s Goat Should Drop Dead.’ I’m now just waiting for Keynesian macroeconomic theory to come up in conversation, so that I can pounce on the opportunity to nod sagely.

Sylvia Bozym is a bookseller at Roaring Stories Bookshop. If you saw a store-person wearing a giraffe onesie during Book Week, that was her.

I’ve been reading what is now being called ‘Plague Lit’ in recent months.

The Plague (La Peste) by Albert Camus was my first foray into a fictional plague. This French classic from 1947 presents us with the day to day changes that occurred in a small city in Algeria when the plague suddenly turned up out of the blue, and is based on real-life plague events in the French Algerian town of Oran dating from 1556.

The fictional plague in Oran began with the sighting of one dead rat by Dr Bernard Rieux. It was considered ‘odd’ by the doctor and ‘a practical joke’ by the concierge. Then there were three dead rats. By the next day the papers had picked up the story and the authorities started to talk about ’emergencies measures’.

In the population, some people complained, some were disconcerted, some felt threatened or anxious. People began to accuse the authorities of inaction and others escaped town completely. Rumours spread along with a sense of foreboding. “Surprise gradually gave way to panic.”

As the course and nature of the plague changed and eventually eased, people reacted with a curious mix of excitement and depression. The uncertainty was the hardest thing to live with, yet reserves of hope were always close to the surface. People began to wonder what life would look like after the plague. Would it return to ‘normal’? What had been changed irrevocably?

“The plague would leave its mark, at least on people’s hearts.”

My next choice of plague lit was Emma Donoghue’s new book, The Pull of the Stars – a story set during the 1918-19 influenza that devastated the entire world as WWI was coming to an end.

The book charts three days on the severely understaffed maternity/fever ward in a hospital in Dublin, Ireland, with Nurse Julia Power and her young volunteer, Bridie Sweeney. It was easy to read, even with the rather detailed 1918 midwifery and autopsy scenes that left me gasping and wincing in sympathy.

Donoghue weaves in all the rumours and myths that surrounded the Spanish flu including it being a ‘miasma’ coming off all the dead bodies from the war in France, a religious judgement about said war, the consequence of so many people travelling or “milling about across the globe”, or an alignment or influence of the stars (hence the name of the book).

The Pull of the Stars was a great holiday read (I read it in two days lying on the beach). I learnt probably more than I ever need to know about certain birthing matters and I was curious to learn about the colour phases of the flu’s development – from red to brown, to blue, to black, that Donoghue used to create her chapter headings. Overall, an engaging read with plenty of parallels to our times.

Finally, I also read A Journal of the Plague Year by Daniel Defoe.

I think if I had read this book prior to 2020, I may have found the story a bit difficult to follow and maybe even a bit dull with its attention to detail, death lists, laws and regulations. However, reading it whilst in the middle of a pandemic has been another experience entirely!

Defoe did a brilliant job of bringing to life this time in history. The despair and fear is palpable, the confusion and hopelessness feels real – almost too real, at times. Yet Defoe was determined to show us that it is, in fact, our community and our desire to live a good collective life that can save us all in the end.

One can only imagine what was felt by the good citizens of London to have their year of plague followed by a cataclysmic fire. We can take heart from the fact that those before us have survived and thrived much worse than a year of coronavirus. This too shall pass.

Next up will be Zadie Smith’s six-essay collection, Intimations, which explores her thoughts and feelings during lockdown.

Bronwyn Richens is a bookseller and children’s book expert at Roaring Stories. During Book Week, you may have seen her wearing a fabulous Dr Seuss Cat in the Hat costume.

It’s been over a decade, Silvey. Over a decade since you gave us Jasper Jones. Enough time for it to become a (meh) movie and (excellent) play, and attracting enough brimming-over adoration among readers to make next-release anxiety unavoidable. But at last, in the tail end of The Year of Our Smiting Lord of Pestilence, with Silvey’s publisher breathing a winded, choked-with-emotion ‘at last’, we have Honeybee – a novel about the friendship between a transgender girl and a gruff old widower, who meet as strangers on a bridge’s edge at night, and see tomorrow because of it.

I am by default already positioned slightly in Silvey’s corner, for no other reason than a stubborn fealty to my Western tribe. (Like me, the author grew up in Perth.) That huddled lonely sticks of a city has twisted in my DNA a slightly surly, romanticised underdog complex – I feel like I’m always going to be the mangy scruff amongst the purebreds of the east. So when a sandgroper makes it big, well my tail wags and my little chest just puffs.

Honeybee has touches of the playful innocence that dappled the dark of Jasper Jones, mainly in the friendship between protagonist Sam Watson and her bubbly neighbour. Yet while the dialogue-powered book compels swift and easy reading, Sam’s struggles – her abusive home, her torments over a misaligned gender and fast-changing body, her poverty, self-loathing and isolation – place the reader in a welter of pain. With the predictability of a pendulum, Silvey swings the reader back and forth: backwards to the cruel violence of the world and the self-sabotaging tendencies it has baked into Sam, and forwards to the redemptive power of friendship. And while the novel is told in first person from the perspective of Sam (a choice likely to stir controversy among the transgender community and its allies), her inner life somehow remains opaque. Compared to the other cast, her character feels rather thin, like something pale, almost lost but enduring, wrapped in a criss-crossing of scars.

Honeybee is nonetheless an engaging, aching read. And it should be noted that consultation with the transgender community was undertaken by the author to inform representation. I’m glad I read it – not least because it taught me it’s not okay to touch drag queens’ wigs (which I did the week before reading this book #RegretfulFool). It also got me to think deeper about the relationship between authors and the marginal and minority characters they embody, give voice to, and inflict conflict and provide shelter to in their fiction.

Other bound pages I have been slowly, like a snake, ingesting: Moonlite (watch our author event recording here!), The Animals in This Country (a book about a plague that causes human/animal cross-communication, recommended to me by John Kaldor’s personal assistant) and a book on ageing well, The Time of Our Lives (interview with author Robert Dessaix incoming).

Next up: Piranesi. Sylvia’s “lovely shard of seaglass” line has more than convinced me it’s worthwhile.

Kate Prendergast is the digital content lady of Roaring Stories and a freelancer in writing, reviewing and graphic design. She didn’t dress up for Book Week, but if she did, her costume would’ve probably been Willy Wonka, with a fake goatee and cane.