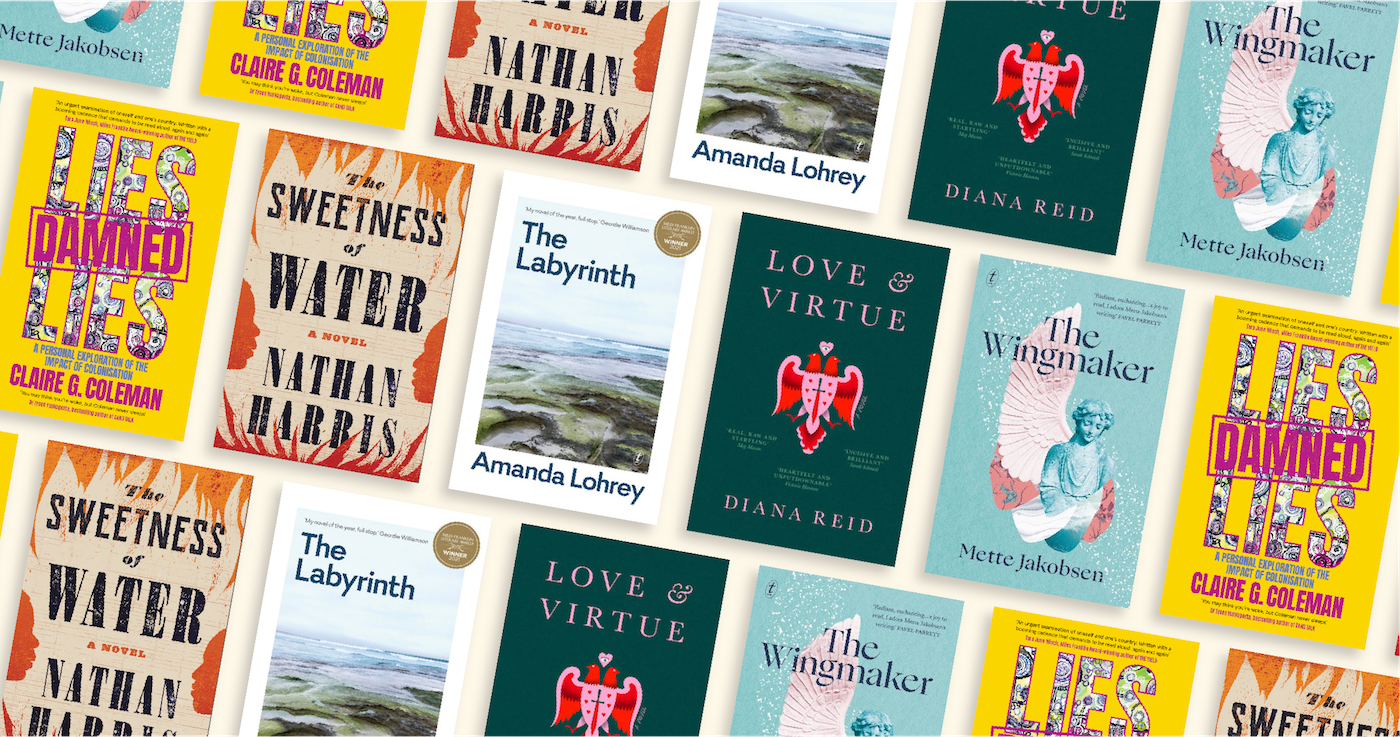 What We’re Reading in September

From a Booker Prize-longlisted novel set just after the American Civil War, to a gripping contemporary fiction debut that takes place on an Australian campus. Here’s what our Balmain bookshop staff are reading this month.

Bron is reading…
The Wingmaker, The Labyrinth and The Sweetness of Water

One of the few good things about lockdown is the extra reading time. My reading journey over the past few months has very much depended on my mood. Sometimes I’ve needed a rich, absorbing story to take me away from it all, then other times I reach for something lighter and easier to distract me from the news.

The Wingmaker by Mette Jakobsen was one of the easier reads with somewhat darker themes – death, illness, loss, grief and fractured relationships. The main character Vega is not only recovering from a broken relationship, but from the after-effects of a heart attack. She is an art restorer, about to embark on her biggest project – the restoration of an angel statute that has had its wings broken off. Her father has an old crumbling seaside hotel that he is slowly restoring with the (inept) help of an ex-army guy suffering from PTSD. This is where Vega chooses to retire to repair the damaged angel.

There are some beautiful snow scenes, a stranded whale, dive-bombing birds, a zany sister and a tango-dancing troupe of local residents. The Wingmaker was a gentle, soul-searching read with a wintry European feel.

Amanda Lohrey won this year’s Miles Franklin award with The Labyrinth. As the title suggests, this story spirals and winds around itself in subtle ways. Erika, our protagonist, learns that while “a maze is a challenge to the brain (how smart you are), the labyrinth to the heart (will you surrender). In the maze you grapple with the challenge but in the labyrinth you let go.” Erika has a lot to learn about her heart and about letting go.

Lohrey has packed a lot of ideas into a quiet space, yet she leaves the reader ample room to find their own way through.

The Sweetness of Water by Nathan Harris is historical fiction set in the brief window of time as the Civil War in America ended and the Emancipation Proclamation came into effect in the South. Freed slaves suddenly found themselves with no job, nowhere to go and nowhere to live. Two brothers make camp in the woods next to George Walker’s farm, and an unlikely friendship begins.

An intimate portrayal of their various backgrounds and previous experiences is drawn to allow the reader to see how it would be possible for an interracial friendship to evolve in the first place. It is specific, not epic. It is mesmerising, gut-wrenching storytelling.

Harris’ story is about all the things that can break us, and the many ways we then heal ourselves. From unimaginable horror, grief and loss, meaningful connections can still be made. Small joys can be felt even in the harshest existence. Hope can blossom even in the middle of misery.

I am now in the middle of the new Michelle de Kretser, Scary Monsters, due in October. I’m completely sucked in by the whole past/future twist she has going on!

Kate is reading…
Two books from the new Ultimo Press

It’s always exciting to hear about a new independent publisher starting up in Australia. In the west, after some neoliberal pragmatics at my old university which dismayed many, the former director of UWAP Terri-ann White struck out and began Upswell. And, not far from our hood and after some tantalising social media hype, Ultimo Press – a small publisher under Hardie Grant – has sprung.

The first book I read of theirs actually hasn’t come out yet. Love and Virtue officially arrives in stores later this month, but I was treated to an advance copy for the purposes of interviewing its debut author, Diana Reid (stay tuned for that one to drop). Set in a Sydney university college, it is a riveting, provocative and thoughtful exploration of the politicised discourse around consent, gender and sexual politics, and the uniquely messy way these can play out in the lives of individuals. Reading it was exhilarating and sometimes queasy – so many of the characters and situations and uncertainties I recognised from my own university days. Including that question, the one that haunts many women, which has followed me since that night of the house party: was it rape?

Lies, Damned Lies by Claire G. Coleman is a very different reading experience. Only realising her Noongar heritage late in life because of a necessary if devastating family secret, Coleman writes with indefatigable passion and fury at the grotesque mythology that built and maintains white settler colonial Australia – which calls invasion ‘discovery’, which calls genocide ‘conquest’ and which continues its project of colonisation, harming individuals, families, communities, culture and country. Looking back, I’m pretty disgusted at the history of Australia that I was taught in school, and looking inward, I’m disappointed at myself for not realising some of the falsehoods I had carried with me over the years. Read our Q&A with Coleman here.

Books I’ve also read this month: The Ministry of Fear in an old Penguin paperback edition, a surreal wartime mystery by the terrific Graham Greene; Running In the Family, a brilliant and utterly original memoir by perhaps my favourite writer of all time, Michael Ondaatje, and TAKE CARE, a new searing and tender poetry collection by Eunice Andrada.