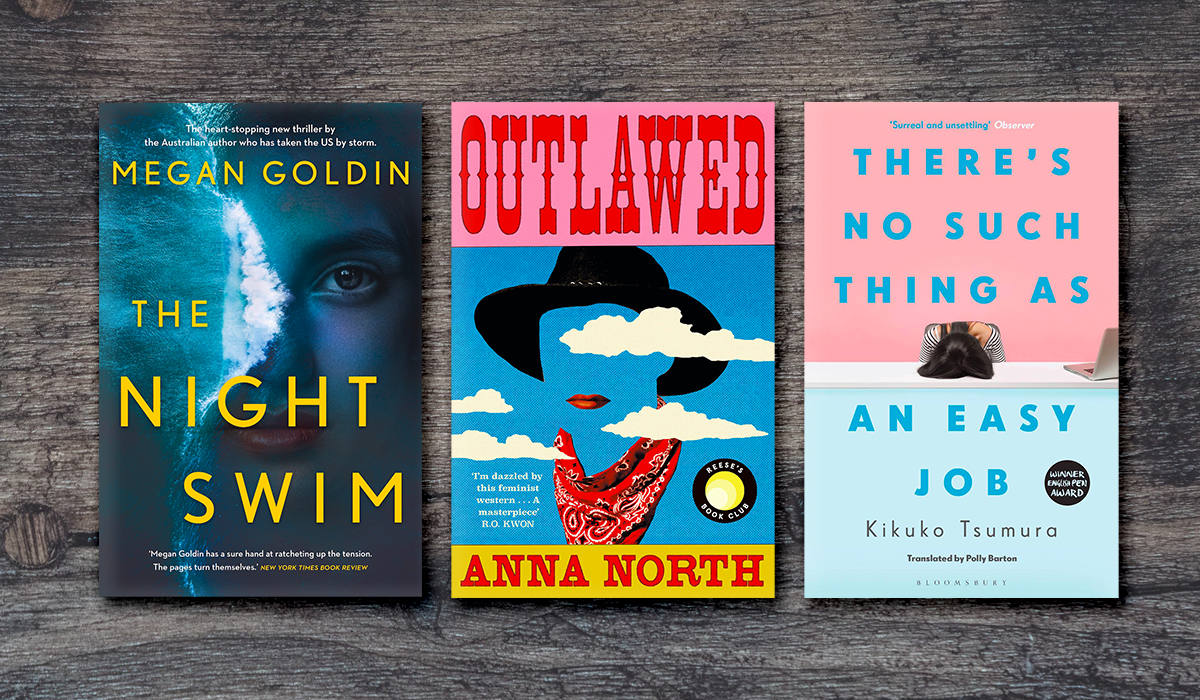 What We’re Reading in January

An all-female outlaw gang set in an alternate wild west; an intriguing crime novel with swirling sister plots; and a sweetly offbeat fiction about the impossible dream of an easy job. Here’s what our Balmain bookshop staff are reading this month.

Bronwyn is reading…
Outlawed (and other great holiday reads)

Summer in Sydney means holidays for many of us. This year we cannot travel very far from home, with staycations becoming the norm for many of us. To make a good staycation great requires picking the perfect holiday read. I usually look for something light-hearted, or an absorbing but easy read, or a fast-paced page-turner. I’ve got three such books to share with you today.

Life After Truth by Ceridwen Dovey is very different to her earlier books. Here, we are dipping into the lives of a group of friends returning to Harvard University for their fifteen-year reunion. Uncomfortable truths and a few home truths are shared as they compare and contrast themselves, not only with each other, but with their former, younger selves. Based very loosely own Dovey’s own experience at Harvard, this was an absorbing, quick read.

Station Eleven by Emily St John Mandel is another plague lit book. This time it’s a ten-minute look into a future world irrevocably changed by a rampant flu virus. If you’re concerned that it might all be a bit too close to home, don’t be. Mandel, after an initial chapter about how it all started, jumps twenty years into the future and the brand new world that has been created post-flu: a great premise that had me wondering what would happen next.

My final holiday read was Outlawed by Anna North. It’s a real hoot! A wild, wild west story populated by women outlaws in (yet another) world changed due to an earlier epidemic. Riding trails with Ada and the Hole in the Wall gang becomes the new frontier – a gender frontier! The gang is made up of women who were no longer accepted by their communities – for being barren, for sexual subversion or for being witches. Some were gay, some were gender fluid and most of them dressed up as men to go on raids.

But Ada didn’t just want to be a rebel hiding in the woods. She was training to be a midwife before being run out of her town. She was filled with a passion to learn and to dispel myths and superstitions surrounding the female body and how they worked (or not). Her aim was to work with a famous frontier midwife to make the lives of other women better. But before she could move on safely, she had to convince the gang to trust her, accept her and help her to get to where she wanted to be.

This middle part is where the fun cowboy stuff happens. Drinkin’, shootin’ and lots of horse riding. Naturally there are a couple of shoot-outs and some time in the county jail. The perfect book to while away a day at the beach.

I hope you enjoy your holiday reading as much as I did.

Caelli is reading…
The Night Swim

I’d be hard-pressed to tell you in simple terms what the plot of The Night Swim is. Pretty much from page one, author Megan Goldin sets up two separate plots that dance and curl around one another, but never quite intertwine. At the centre of these two strands is investigative podcaster Rachel Krall. While visiting a small town in North Carolina to follow a contentious rape trial, Rachel finds herself drawn into a seemingly unrelated cold-case death by a series of letters by the victim’s elusive sister, claiming that her sister Jenny’s drowning was murder.

This book is all about the mystery – there’s no fresh, gory homicides here. The courtroom trial is about framing the rape case rather than investigating it, and it’s set against the backdrop of a suspicious local death from decades ago that most townspeople don’t even remember. It gives the story a slightly ethereal feel, where the focus is more on the people in and around the crimes rather than the finer details of the crimes themselves.

I like the contrast created by the two cases – the rape trial is a current case that has already been investigated and we’re now seeing it formally presented in a court setting, while the drowning of Jenny Stills is a historic case that was never even followed up because it was recorded as an ‘accident’. It feels like a subtle prodding from the author towards a social commentary on the grey nature of the justice system, especially regarding how we perceive and qualify crimes like rape in particular.

The two sister plots start to swirl together into some sort of parallel resolution at the end – and don’t worry, there’s a good twist to keep you guessing. It certainly got me, but I confess I was too impatient to know the answer by then and wasn’t trying very hard to solve the mystery. The Night Swim is an easy-to-read book, but it did leave me with some food for thought as well. If you like psychological thrillers that leave you a bit of substance to chew over once you turn the final page, you’ll enjoy this book.

To kick off the new year, I wanted my first read to be a bit different – and by that I mean something that’s just plain fun. After last year’s insanity I’ve been craving something light, and Kikuko Tsumura’s new novel There’s No Such Thing as an Easy Job was perfect for this; sweetly offbeat and genuine, a great mix of both the relatable and the slightly unsettling.

We follow an unnamed main character as she attempts to find the easiest job possible after leaving an overwhelming workplace. The book is separated into five sections, each exploring one of these supposedly easy jobs. From making advertisements for businesses that appear out of the blue, to writing fun facts and useful tips for the backs of rice cracker packets, to quietly perforating museum tickets in a massive forest, each section becomes more and more surreal as Tsumura delves into the different worlds surrounding each bizarre workplace. This was a really enjoyable read and I loved the way Tsumura blends both the absurd and the mundane elements of our working lives to ponder how we find meaning in what we do.

Next on my list is Hag, a retelling of ten uncommon fables from the British Isles, which is hands down my favourite cover design I’ve seen recently. I’m super excited to stop gazing longingly at the cover and actually reading it!